The Chair of the Benghazi Committee Just Explained Why He Wants the Mueller Probe to Wrap Up, and Irony Is Officially Dead 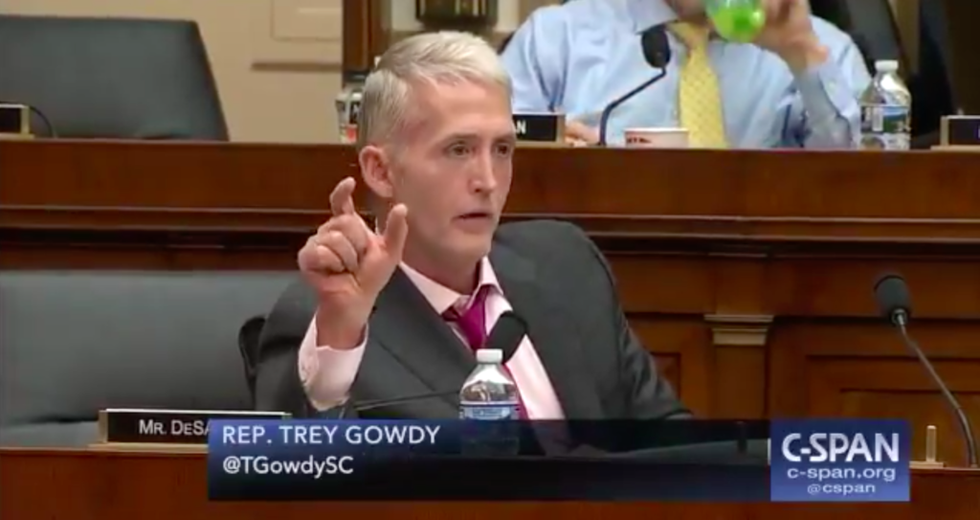 At a House Judiciary Committee hearing on Thursday, Representative Trey Gowdy (R-S.C.) expressed his frustration with the length of the Mueller probe, urging Deputy Attorney General Rod Rosenstein to, in his words:

finish it the hell up because this country is being torn apart.

Gowdy proceeded to shout at Rosenstein, accusing him and other top law enforcement officials of being biased against President Donald Trump, who is currently the subject of Special Counsel Robert Mueller's investigation into whether Russian operatives colluded to help him win the 2016 presidential election:

Nor did he stop there. Gowdy then accused Democrats of using the investigation into the president's Russia connections as "a presumption of guilt":

Democrats are using this investigation as a presumption of guilt, which I find astonishing and in the long run, for the health of this republic, I would encourage them to go back to the presumption of innocence that we use to hold sacred. There’s a presumption of guilt, there’s a desire by Democrat senators to fundraise off your investigation. More than 60 Democrats have already voted to proceed with impeachment before Bob Mueller has found a single, solitary, damn thing. More than 60 have voted to move forward with impeachment, and he hasn’t presented his first finding!

Whatever you got, finish it the hell up because this country is being torn apart.

The irony of this outburst appeared to be lost on Gowdy, who spearheaded and was the public face of the Benghazi investigation, which, despite persistent accusations against President Barack Obama, Hillary Clinton, and Susan Rice, ten investigations failed to find evidence that they or any other high-ranking Obama administration officials had acted improperly.

There were, however, many online who perceived the irony immediately.

Is this a bad time to bring up the House Ethics complaint I filed on Rep Trey Gowdy for taking Anti-Hillary group b… https://t.co/u3hixhrXN4
— Scott Dworkin (@Scott Dworkin) 1530236798.0

The Republican who led the endless Benghazi investigation is now very angry that Mueller is taking so long https://t.co/fmpEQfIpj9
— Aaron Rupar (@Aaron Rupar) 1530217404.0

That Gowdy would have such an outburst is rather striking when one considers how fervently he's defended the investigation, and often from attacks from members of his own political party.

In March, Gowdy, during a Fox News appearance, had strong words for John Dowd, the president’s former attorney, after the president called for an end to the investigation into Russian interference.

“If you have an innocent client, Mr. Dowd, act like it,” Gowdy said at the time. “The President’s attorney frankly does him a disservice when he says that.”

Mueller’s investigation isn’t limited to possible Russian collusion with the Trump campaign, Gowdy noted, adding that the investigation is also examining Russian interference with the entire U.S. democratic process and the 2016 presidential election.

“If the allegation is collusion with the Russians, and there is no evidence of that, and you are innocent of that, act like it,” Gowdy said. He added later, “If you’ve done nothing wrong, you should want the investigation to be as fulsome and thorough as possible.”

Last month, Gowdy again made headlines after he said he is now “more convinced” that the FBI acted appropriately in its handling of the investigation into Russian interference in the 2016 election, breaking with President Donald Trump’s claims that the Obama administration gathered information to spy on the Trump campaign. (The president and his supporters have referred to this as “Spygate.)

“President Trump himself in the Comey memos said if anyone connected with my campaign was working with Russia, I want you to investigate it, and it sounds to me like that is exactly what the FBI did,” Gowdy told host Martha MacCallum. “I think when the president finds out what happened, he is going to be not just fine, he is going to be glad that we have an FBI that took seriously what they heard.”

“I am even more convinced that the FBI did exactly what my fellow citizens would want them to do when they got the information they got, and that it has nothing to do with Donald Trump,” he continued.

Gowdy also suggested that the president’s tweets on the subject could be subject to questioning by Robert Mueller, the special counsel.