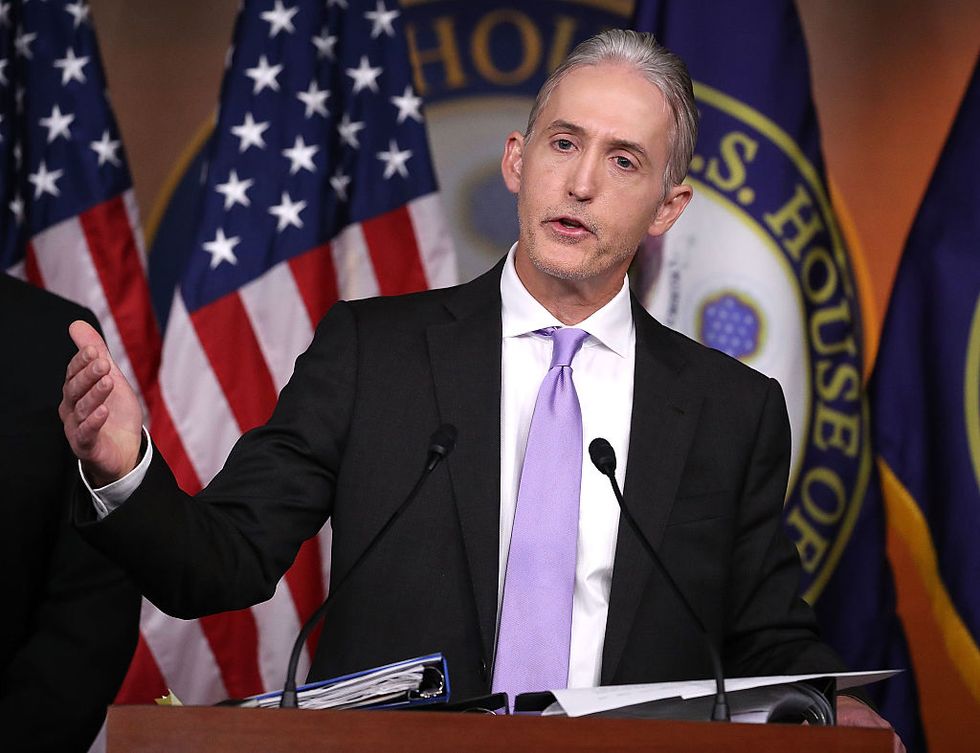 Representative Trey Gowdy (R-S.C.), the House Oversight Committee Chairman, said he is now "more convinced" that the FBI acted appropriately in its handling of the investigation into Russian interference in the 2016 election, breaking with President Donald Trump's claims that the Obama administration gathered information to spy on the Trump campaign. (The president and his supporters have referred to this as "Spygate.)

“President Trump himself in the Comey memos said if anyone connected with my campaign was working with Russia, I want you to investigate it, and it sounds to me like that is exactly what the FBI did,” Gowdy told host Martha MacCallum. “I think when the president finds out what happened, he is going to be not just fine, he is going to be glad that we have an FBI that took seriously what they heard.”

“I am even more convinced that the FBI did exactly what my fellow citizens would want them to do when they got the information they got, and that it has nothing to do with Donald Trump,” he continued.

Gowdy also suggested that the president's tweets on the subject could be subject to questioning by Robert Mueller, the special counsel overseeing the Russia investigation.

“If I were his lawyer, and I never will be, I would tell him to rely on his lawyers and his (communications) folks,” he said.

Fox News legal analyst Andrew Napolitano, asked to respond to Gowdy's remarks, agreed, saying claims that the president's claims that the FBI spied on the Trump campaign "seem to be baseless."

“There is no evidence for that whatsoever,” Napolitano said, adding that the fact the FBI source, identified as Stefan A. Halper, spoke with “people on the periphery of the campaign is standard operating procedure in intelligence gathering and in criminal investigations.”

I understand the president's frustration that he was not informed of the fact that his campaign was being investigated, not because they think the campaign did anything wrong, but some people may have unwittingly... welcomed the Russian involvement in the campaign, and Donald Trump didn't know about it... If they were there for some nefarious reason, like former Mayor Giuliani suggested, to gather data from the campaign and pass it to the West Wing and Mrs. Clinton, I'd want to see evidence before I made an allegation that outrageous.

This isn't the first time Gowdy, who attended Justice Department briefings on the confidential source last week, has criticized the president and his behavior.

In March, Gowdy, during a Fox News appearance, had strong words for John Dowd, the president's former attorney, after the president called for an end to the investigation into Russian interference.

“If you have an innocent client, Mr. Dowd, act like it,” Gowdy said at the time. “The President’s attorney frankly does him a disservice when he says that.”

Mueller’s investigation isn’t limited to possible Russian collusion with the Trump campaign, Gowdy noted, adding that the investigation is also examining Russian interference with the entire U.S. democratic process and the 2016 presidential election.

“If the allegation is collusion with the Russians, and there is no evidence of that, and you are innocent of that, act like it,” Gowdy said. He added later, "If you’ve done nothing wrong, you should want the investigation to be as fulsome and thorough as possible.”

.@TGowdySC on President Trump's lawyer John Dowd calling for shutting down the Mueller Investigation: “When you are… https://t.co/u5cyzBNcQg
— FoxNewsSunday (@FoxNewsSunday) 1521380782.0

Gowdy's most recent statements come a day after the president claimed that the Russia investigation “will be MEDDLING with the mid-term elections” in November, suggesting that special counsel Robert Mueller’s probe intends to torpedo the GOP’s chances of consolidating their power in Congress.

The president has long claimed that Mueller’s investigation is politically motivated.

“The 13 Angry Democrats (plus people who worked 8 years for Obama) working on the rigged Russia Witch Hunt, will be MEDDLING with the mid-term elections, especially now that Republicans (stay tough!) are taking the lead in Polls,” Trump tweeted yesterday. “There was no Collusion, except by the Democrats!”

“Why aren’t the 13 Angry and heavily conflicted Democrats investigating the totally Crooked Campaign of totally Crooked Hillary Clinton,” Trump wrote in a follow-up post. “It’s a Rigged Witch Hunt, that’s why! Ask them if they enjoyed her after election celebration!”

In another tweet, the president suggested the investigation is a distraction from “North Korea Nuclear, bad Trade Deals, VA Choice, the Economy, rebuilding the Military.”

The president did not provide any proof for his claims. Although outlets such as CNN have reported that several members of Mueller’s team have donated to Democrats, the investigation into Russian meddling is a thoroughly bipartisan one and has also been the subject of several Republican-led Congressional inquiries.

Mueller himself is a Republican who was appointed as FBI director by former President George W. Bush. Deputy Attorney General Rod Rosenstein, the man who appointed Mueller, was appointed by President Trump.