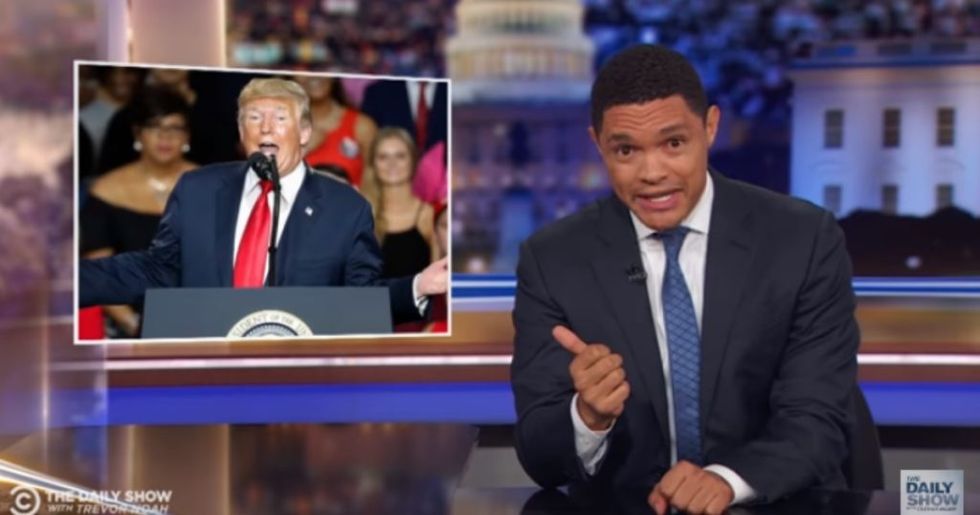 On Wednesday, an anonymous White House official penned a scathing op-ed in the New York Times blasting President Donald Trump and his chaotic presidency. Trevor Noah of The Daily Show explained Wednesday night why he finds the editorial to be so terrifying.

"There’s a secret group of people within the White House actively working to curb President Trump," Noah said, "which is wild, because this means this whole time we’ve been dealing with the watered-down version of Trump."

Noah continued, offering his take on why the mutiny published in the Times is so scary.

"You’re telling me that this is the better version?" he asked. "Like I thought this was the peak of crazy, this is Diet Trump? This is what you’re saying?"

Noah questioned why the author, and others within the administration, chose not to invoke the 25th Amendment despite writing that it was seriously considered.

"The 25th Amendment is there so that you can use it," Noah quipped. "It's like there's a sign that says 'in case of emergency break glass' but then these guys were like, 'we could break the glass but then there'd be glass everywhere. Maybe we can try to steer the fire in a different direction.'"

Noah added that although the author assures Americans that "there are adults in the room," it "doesn't make me feel any better."

The release of Bob Woodward's explosive new book, Fear: Trump in the White House, Noah suggested, corroborates the editorial, even though Trump is attacking both as "fake news."

Noah concluded that although the op-ed was disturbing, it shouldn't be surprising.

"Obviously all this stuff is crazy, but at some point, we've got to stop saying that it's a bombshell," Noah said. "Trump is just doing a lot more Trump than we thought he would, but it's not a bombshell."

What would be a bombshell, according to Noah, is "the day it comes out that Trump secretly works out, and reads Shakespeare, and teaches kids how to code, that's when we can call it a bombshell."

"Right now," Noah pleads, those who can control Trump "just need to break the glass."

Noah made one person "laugh off some of the nausea."

"If it turned out the president was a spirit sent to punish us all for our hubris, or his eyes glowed red and in them we all saw the horrors that lay beyond our universe, I wouldn't be surprised."

"There is literally no bottom."

Others noted that the American presidency has turned into a reality show.

"Our government has become more entertaining than power."

@TheDailyShow Man our government has become more entertaining than power. America is now #1 in incarceration AND TV ratings...
— $Carlthebarberman (@$Carlthebarberman) 1536210612.0

One user noted that the subversion of the president is equally as terrifying as Trump's behavior.

It's both funny and scary, others said.

How much more can we take? The so-called "constitutional crisis" has been here all along.