This 1950s TV Show Featured a Con Man Named Trump Who Wanted to Build a Wall, and It's Freaking People Out 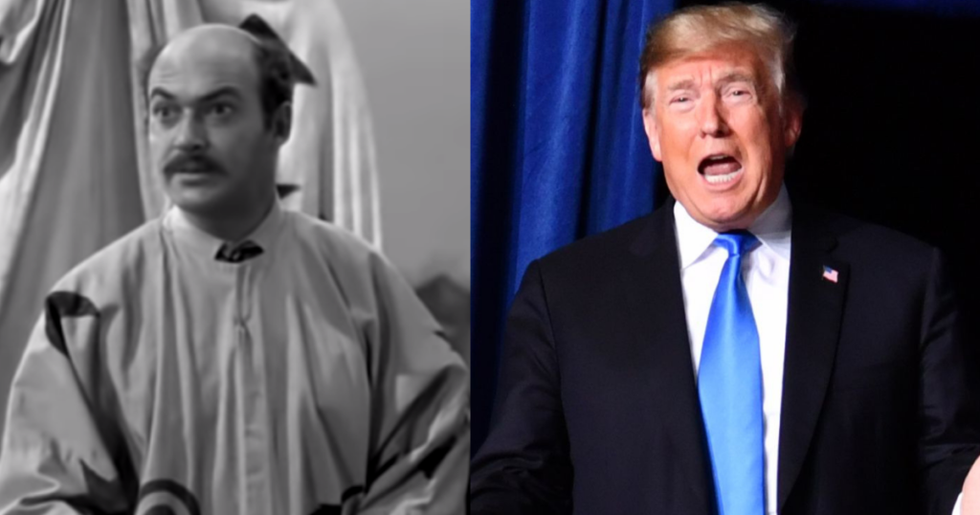 Like much of America, you may find yourself occasionally asking if our timeline could get any stranger. Turns out, the answer is yes.

In 1958, an episode of the TV western Trackdown featured a character named Walter Trump, a con-man who promised to build a wall around a town to protect the residents from the impending end of the world.

The episode was posted to YouTube in November 2016 with claims that it predicted our current President Donald Trump.

The fictional Trump claimed that he alone could prevent the town from being destroyed by comets and that the inhabitants should put their faith in him, and only him, to ensure their survival.

And the full episode here:

"I bring you a message, a message few of you will be able to believe, a message of great importance, a message I alone was able read in the fires of the Universe," Trump proclaimed to the locals. "But be not afraid, my friends. I also bring you the means with which to save yourselves."

Trump told "those who want to be alive tomorrow" the world will end at midnight and that "without my knowledge, every one of you will be dead."

After one resident wises up to Trump's grift and complains to the sheriff, who is on Trump's side, Trump threatens to sue those who question his message. THe local judge also refuses to intervene.

Narrator: "The people were ready to believe. Like sheep they ran to the slaughterhouse. And waiting for them was the high priest of fraud."

Trump: "I am the only one. Trust me. I can build a wall around your homes that nothing will penetrate."

Townperson: "What do we do? How can we save ourselves?"

Trump: "You ask how do you build that wall. You ask, and I’m here to tell you."

Trump is eventually arrested as he tries to flee the town in the dead of night.

The foreshadowing of our time is haunting, as the real Trump holds the country hostage over his desire to build a wall along the U.S.-Mexico border to solve a crisis that exists solely in his head.

The similarities to today are obvious. But they get even eerier if we look a few years into the past. As a presidential candidate, Trump vowed to build a wall to protect the people of New Hampshire "who have a tremendous problem with heroin and drugs, you wouldn't even believe it."

Not a far cry from warning people about hellfire from above.

And the parallels go well beyond the namesake and false prophecy.

Fred Trump was a well-known real estate developer in the 1950s, so the namesake probably not a coincidence.

Though people have theories.

You may be wondering if this is all a hoax.

Thanks to Snopes, we now know this is all too real.

"A representative for MeTV, a Chicago network that airs reruns of Trackdown, confirmed that the episode was real," Snopes reported on Wednesday. "The rep said that the after Hoby tells Walter Trump that he is under arrest, the character gets shot by another character and may have been killed."