Tomi Lahren Just Tweeted That Donald Trump's Tear Gas Attack on Asylum-Seekers Was the 'Highlight' of Her Thanksgiving, and People Can't Even 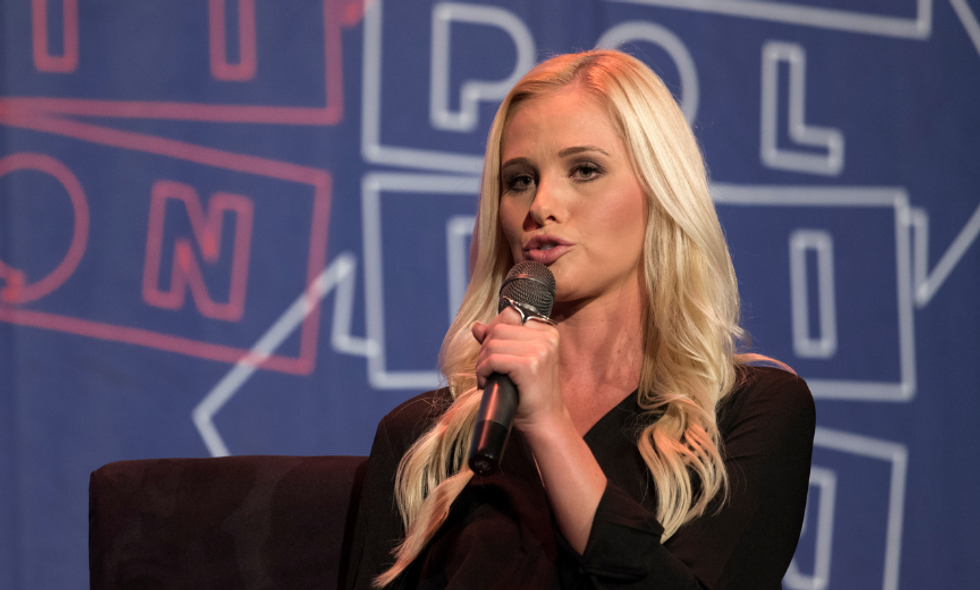 Tomi Lahren speaks during Politicon at the Pasadena Convention Center in Pasadena, California on July 29, 2017. Politicon is a bipartisan convention that mixes politics, comedy and entertainment. (Photo by: Ronen Tivony)

Fox News commentator Tomi Lahren sparked a firestorm on Monday after she took to Twitter to praise the use of tear gas by the United States Border Patrol on asylum-seeking refugees.

"Children screamed and coughed," the Associated Press wrote as events unfurled in Tijuana, Mexico. "Fumes were carried by the wind toward people who were hundreds of feet away."

The gas was employed after "around 500" refugees tried to squeeze through border fencing.

"Bum-rushing the border is a CHOICE and has consequences," Lahren wrote. "Watching the USA FINALLY defend our borders was the HIGHLIGHT of my Thanksgiving weekend."

Bum-rushing the border is a CHOICE and has consequences. Watching the USA FINALLY defend our borders was the HIGHLI… https://t.co/WJvT0Etesp
— Tomi Lahren (@Tomi Lahren) 1543211666.0

Twitter raged at Lahren for her sanctimonious support of the cruelty levied on unarmed civilians by President Donald Trump - over Thanksgiving weekend, no less.

@TomiLahren The irony of celebrating the mistreatment of refugees on Thanksgiving, a holiday celebrating the benevo… https://t.co/YvUPYvSy5N
— Dylan (@Dylan) 1543258678.0

@dyllyp @TomiLahren There are plenty of reasonable comments and arguments to made about borders and border security… https://t.co/NtIheaDjH2
— Nick Bassano (@Nick Bassano) 1543261704.0

@TomiLahren While I do not completely agree with or support the mass group of illegal immigrants, if that truly was… https://t.co/SPKJhVFNRY
— Mike Gallo (@Mike Gallo) 1543246274.0

The blowback was brutal.

@TomiLahren At which point did you climax? Was it when the teargas hit the children?
— Eddie Edwards (@Eddie Edwards) 1543250577.0

@TomiLahren Was it the highlight because no one wanted to eat turkey with you because you’re a total asshole?
— Juliana Harkavy (@Juliana Harkavy) 1543263016.0

@TomiLahren I have never before in my life wished harder that there really is a god, and that people like you would… https://t.co/DNd56hzmhB
— Hoosier Momma (@Hoosier Momma) 1543256084.0

@TomiLahren Mine was the turkey followed closely by time with family. It's weird you take such delight in suffering… https://t.co/zrT7sNagta
— Paulito McLovin (@Paulito McLovin) 1543250466.0

@TomiLahren The highlight of your week is watching the mismanagement of refugees on a day that marks the virtue of… https://t.co/FZAfseVwfk
— M.M. Schill (@M.M. Schill) 1543260777.0

Twitter went aflutter on Sunday after Trump demanded Mexico capture migrants, whom he deemed without evidence as "stone cold criminals," before threatening to completely close the southern border.

"Mexico should move the flag-waving Migrants, many of whom are stone cold criminals, back to their countries," wrote the leader of the free world. "Do it by plane, do it by bus, do it anyway you want, but they are NOT coming into the U.S.A. We will close the Border permanently if need be. Congress, fund the WALL!"

Mexico should move the flag waving Migrants, many of whom are stone cold criminals, back to their countries. Do it… https://t.co/IqgnrBTQFl
— Donald J. Trump (@Donald J. Trump) 1543231181.0

Alyssa Milano's brash response to Trump movitated Lahren to jump into the discussion.

Trump was rebutted by a chorus of informed individuals who, unlike Lahren and Trump, understand that seeking asylum in the United States is not a crime.

These children are barefoot. In diapers. Choking on tear gas. Women and children who left their lives behind -- se… https://t.co/r3SXbDyGGW
— Gavin Newsom (@Gavin Newsom) 1543208589.0

@realDonaldTrump So the children and babies in diapers are criminals? How so please explain what crimes they have committed.
— Chris Fleming (@Chris Fleming) 1543261612.0

@miatewantin @Dvlirishsandman @realDonaldTrump Help yourself to a Google search. Legal immigration and asylum is a… https://t.co/kGqC7NqMa7
— Shaun (@Shaun) 1543263760.0

@CyanOcarina @miatewantin @Dvlirishsandman @realDonaldTrump That’s the way you seek asylum from persecution, by asking for it at the border!
— Jack Deere (@Jack Deere) 1543264049.0

Trump was not spared the Internet's wrath. Mexico was supposed to fund a border wall, no?

@realDonaldTrump Well you are the “Stone Cold Criminal” expert who has become quite the magician lately with all yo… https://t.co/Pq7hnPsSd2
— LoriAnn Persinger (@LoriAnn Persinger) 1543261416.0

On Monday, Trump and Border Patrol defended his decision to use tear gas on unarmed civilians on foreign soil.

The president said agents "had to use (force) because they were being rushed by some very tough people and they used tear gas."

Trump added: "Here's the bottom line, nobody's coming into our country unless they're coming legally."

[CBP] effectively managed an extremely dangerous situation involving over 1,000 individuals who sought to enter the US unlawfully in large groups," said McAleenan. "They did so safely and without any reported serious injuries on either side of the border."

This statement, however, contradicts reports of people, including children and babies, coughing from exposure to the tear gas.