Tomi Lahren Tried to Clap Back at Michelle Obama for Her Praise of Her Husband, It Did Not Go Well 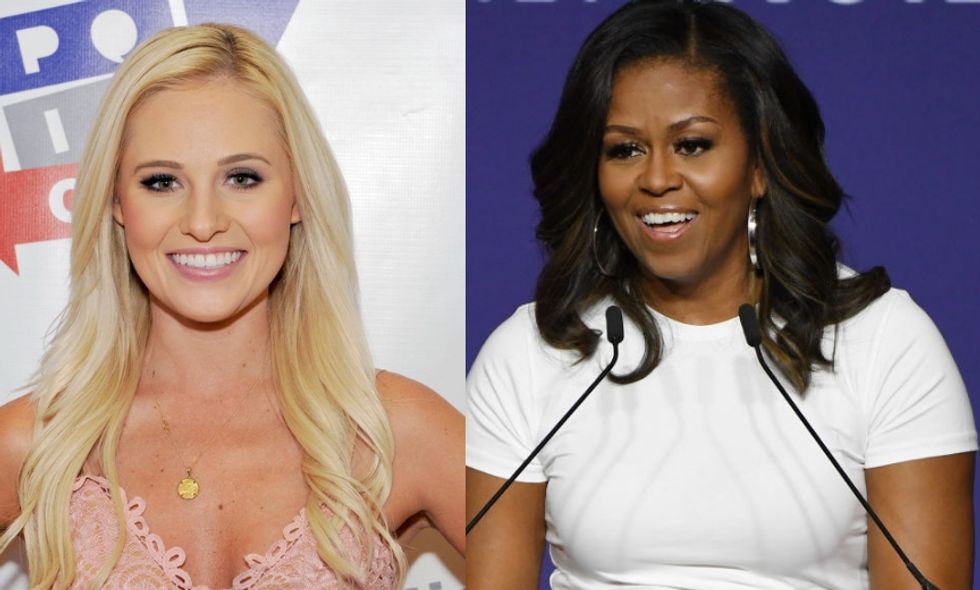 Ultra-conservative commentator Tomi Lahren is facing backlash after telling former First Lady Michelle Obama to "sit down, Michelle." Her comments were in response to Mrs. Obama's speech at a "When We All Vote" rally.

The former first lady was cautioning against apathy in young voters:

"If we want qualified people that we trust, then people have to vote. Because you can’t vote some of the time and then sit out. You know, we saw that happen. We experienced that, But we had a great president.”

The assertion that the United States "had a great president" didn't sit well with Lahren, who took to Twitter to chastise her.

"By what measure would I ask that her husband was a better president than the current president? Not that kind of growth, not in poor security, not independent relations, not in making the United States strong and America first strong on the international stage again."

And Lahren would've gotten away with it too, if it weren't for those Twittering kids.

@TomiLahren I know excessive exposure to bleach can affect your thinking, so I'll go easy on you. When Obama took o… https://t.co/By2LkrNMzr
— Spikewitwicky (@Spikewitwicky) 1537849540.0

Many couldn't believe Lahren's statement that President Donald Trump had redeemed the reputation of the United States on the world stage. The ridicule worsened when, only one day after this tweet, world leaders at the United Nations General Assembly laughed at Trump's boasts that he'd had the greatest first two years of any president in history.

And when it comes to public opinion, it's fairly safe to say that Michelle Obama has Tomi Lahren beat.

Many jumped to the former first lady's defense.

Mrs. Obama has long been a favorite target of conservatives like Tomi Lahren.

The former first lady has received criticism even for efforts as innocuous as advocating healthier school lunches for America's children. One Fox News host went so far as to call her a hypocrite because she could stand to "lose a few pounds."

Republicans' ire for Mrs. Obama often invokes racist connotations as well. One Virginia official resigned after calling Michelle Obama an "ape in high heels." When asked what he would like to see Michelle Obama do in 2017, New York co-chairman for Donald Trump's campaign Carl Paladino said:

“I’d like her to return to being a male and let loose in the outback of Zimbabwe where she lives comfortable in a cave with Maxie, the gorilla.”

Paladino showed no regret when asked if he'd actually said the comments:

Despite the hatred often lobbed at her from the right, Mrs. Obama has frequently exemplified the advice from her famous speech at the 2016 Democratic National Convention: "When they go low, we go high."