Tomi Lahren Went on Fox News and Claimed She's Never Seen a First Lady Criticized as Much as Melania, So Twitter Refreshed Her Memory

And she said it with a straight face. 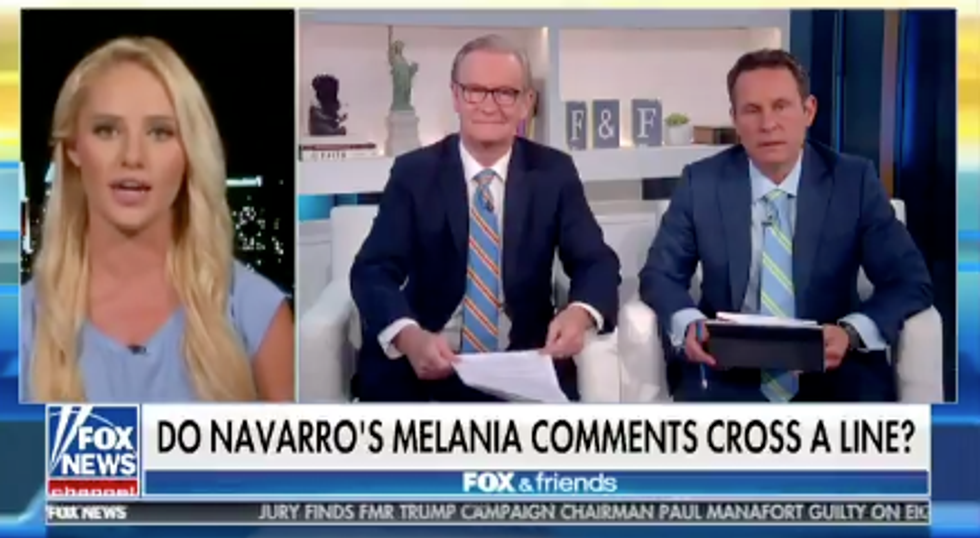 Conservative commentator Tomi Lahren said she has "never seen a first lady be attacked like" First Lady Melania Trump in a Fox News interview on Wednesday, and was swiftly reminded on social media of numerous instances in which Michelle Obama was belittled by right-wing pundits.

Tomi Lahren on Fox & Friends: "Can you imagine if we would sit here on Fox News and attack Michelle Obama for somet… https://t.co/YIknB3FkBP
— John Whitehouse (@John Whitehouse) 1534933938.0

"I have never seen a first lady be attacked like this, like Melania Trump has, for the good works and the good deeds that she has done," Lahren said Wednesday on Fox & Friends.

Lahren was complaining about a comment made by GOP strategist Ana Navarro, who said that Mrs. Trump had a "lack of self-awareness [and] any sense of shame" in her "Be Best" crusade against cyber-bullying - because her husband, President Donald Trump, is the world's most vocal Twitter antagonist.

Navarro joked that the first lady "suffered oxygen deprivation to the brain."

"Everything she [Navarro] said is exactly what I'm thinking about her," Lahren groaned. "Can you imagine if we would sit here on Fox News and attack Michelle Obama for something that she was trying to do to better the country?"

Lahren added: "We'd be attacked up and down. But because it’s Melania, because her last name is Trump, people like Ana Navarro think it’s okay that they’re entitled to do that."

Oh, we can definitely imagine it, because it happened non-stop during Barack Obama's presidency, almost exclusively by right-wing talking heads on Fox News.

There was that time Sean Hannity blasted Mrs. Obama for encouraging kids to go to college.

"The Western world is under constant threat from Islamic jihadists," Hannity griped, "but your first lady, Michelle Obama, is busy making a rap music video about going to college."

Lahren herself has gone after Obama.

Racist and sexist remarks have been hurled at the Obama family for years.

Rush Limbaugh in 2015: "It doesn't look like Michelle Obama follows her own nutritionary, dietary advice. And then we hear that she's out eating ribs at 1,500 calories a serving with 141 grams of fat per serving, yeah it does -- what do you mean, what do I mean?"

There was also former vice presidential nominee Sarah Palin, who chastised Mrs. Obama's plan to help children eat healthily and to exercise. "The first lady cannot trust parents to make decisions for their own children," Palin said, "for their own families in what we should eat."

Why can't Lahren imagine what she claims? Maybe she doesn't watch Fox News.

Or maybe Lahren, 26, was too young to remember the anti-Obama vitriol from the late 2000's.

CheatSheet noted some examples of right-wing attack lines on the former first lady, including:

Slaves that worked there were well-fed and had decent lodgings provided by the government, which stopped hiring slave labor in 1802.

Lahren may want to spend a little more time on YouTube. Be Best.