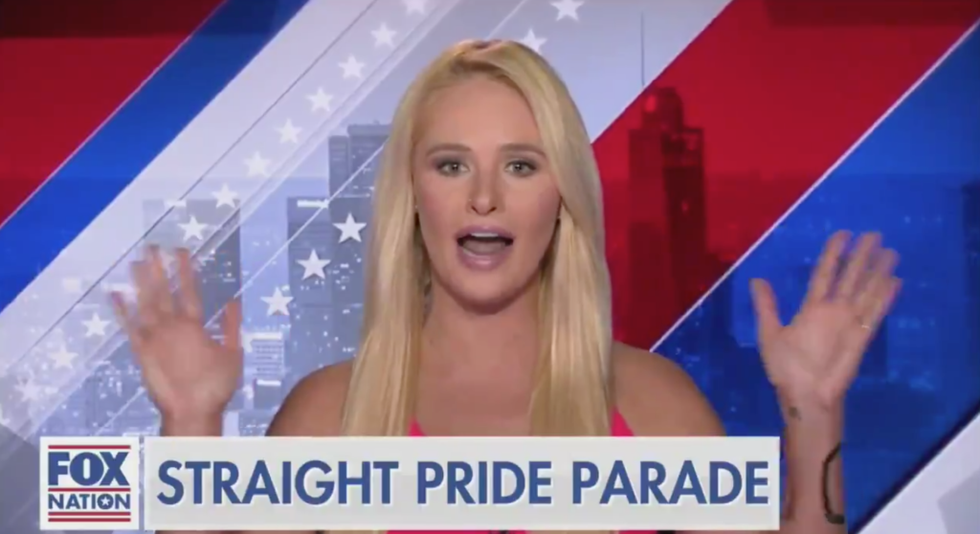 Cisgender straight people are having a terrible LGBTQ Pride month, and Fox Nation's Tomi Lahren is sick of it.

After news went viral that a group of non-LGBTQ men were seeking permits to hold a "straight pride" parade, queer people across Twitter couldn't stop roasting the effort.

Tomi Lahren declared that the mockery reflected an "open season on straight white men" before going on a rant about how LGBTQ people—whose existence is illegal in over 70 countries—aren't tolerant enough of heterosexuals.

"Isn't it funny how the so called 'loving and tolerant' leftists and members of the LGBT community demand respect for their events and celebrations, but are so quick to diminish, demonize, and mock groups they disagree with?...Why is it so taboo nowadays to recognize or be proud of heterosexuality and traditional values in general?...The very groups that preach tolerance, love and acceptance are anything but loving, tolerant and accepting.'

She continued to lament "this era of 64 gender options, female boy scouts, and pronoun enforcement." Nine transgender women have been violently murdered so far this year.

Lahren forgot to address how jokes about khakis at straight people's expense are equal to  centuries of violence and subjugation faced by LGBTQ individuals at straight people's hands. The "Social Justice Warriors" on Twitter, whom she railed against in the segment, were quick to remind her.

@existentialfish This is like a healthy person demanding to use handicap parking spaces despite having a million ot… https://t.co/eBSVkbDCM9
— Intern Ally (@Intern Ally) 1559845722.0

But many LGBTQ people have made it clear that they won't rain on the parade.

Y'know at this point just let them have a Straight Pride parade, gonna be boring as shit anyway. I wanna see compar… https://t.co/zjBcD6I6k1
— MyDixieWrecked (@MyDixieWrecked) 1559923153.0

why do we spend every june explaining why there’s no need for straight pride? what if we just let them have their p… https://t.co/ygjQmqVNFG
— jackson (@jackson) 1559934474.0

But that doesn't mean we aren't going to throw some shade.

But let your freak flag fly, Tomi. Just don't shove your lifestyle in our faces.