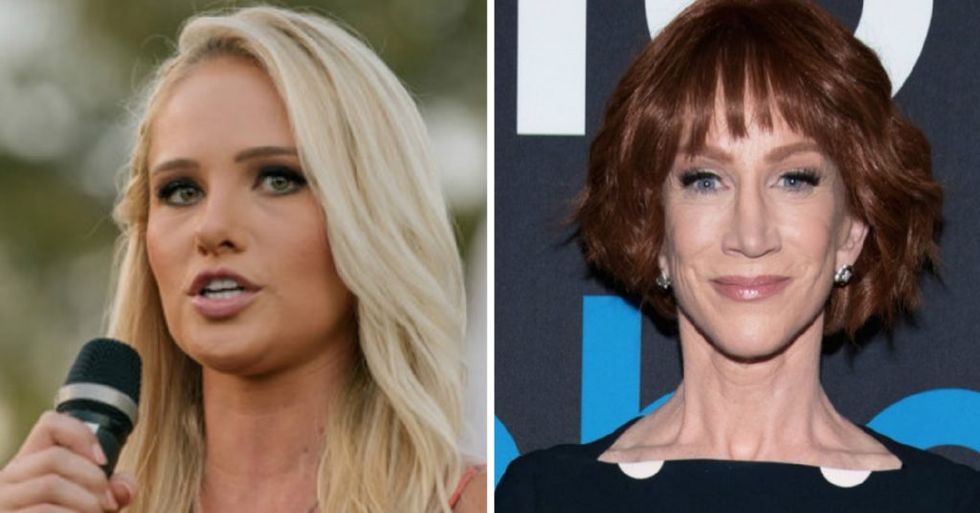 Lahren posted a picture to social media of herself in costume, captioned it "Trump Derangement Syndrome," and tagged Griffin.

The photograph was clearly meant to provoke Griffin, whose original shoot is featured below.

“He ruined me. Sometimes I do things and you may wonder, Kathy, where is your head at? Well folks, I’m taking matters into my own hands,” she wrote, in part.

Gosh you are just so original @TomiLahren! I thought images like this one incite violence! At least that’s what you… https://t.co/r2rGxWfcRE
— Kathy Griffin (@Kathy Griffin) 1541003072.0

"I thought images like this one incite violence!" Griffin wrote, a reference to much of the criticism she received from Lahren and other conservatives for her protest against the president.

If all of this sounds childish, consider that the two women have a history of sparring.

In May 2017, Griffin posted a video of herself holding a prop meant to resemble President Trump's severed head.

Griffin was savaged for the image, and several members of the Trump family criticized her. Soon afterward, she removed the photo from her social media accounts and asked for forgiveness. The backlash cost Griffin marketing deals and her spot on CNN's New Year's Eve broadcast with Anderson Cooper. The FBI and Secret Service investigated her to determine if she was, in fact, a threat to the president. In the fall of 2017, Griffin retracted her apology.

The incident spurred a controversy on the limits of First Amendment rights. Lahren was one of Griffin's more prominent critics. Soon after the photo shoot, Lahren called Griffin a "demented a-hole."

Griffin called Lahren an "evil, horrible shell of a human being."

Dear @TomiLahren, You and your network told me my career was over and that I was irrelevant. Now you want to inte… https://t.co/HN5fkrZRU5
— Kathy Griffin (@Kathy Griffin) 1536086123.0

“Thought maybe you’d like to defend and discuss your Trump Derangement Syndrome on the most-watched cable news network. Guess not! Have a nice day," Lahren wrote Griffin afterward.