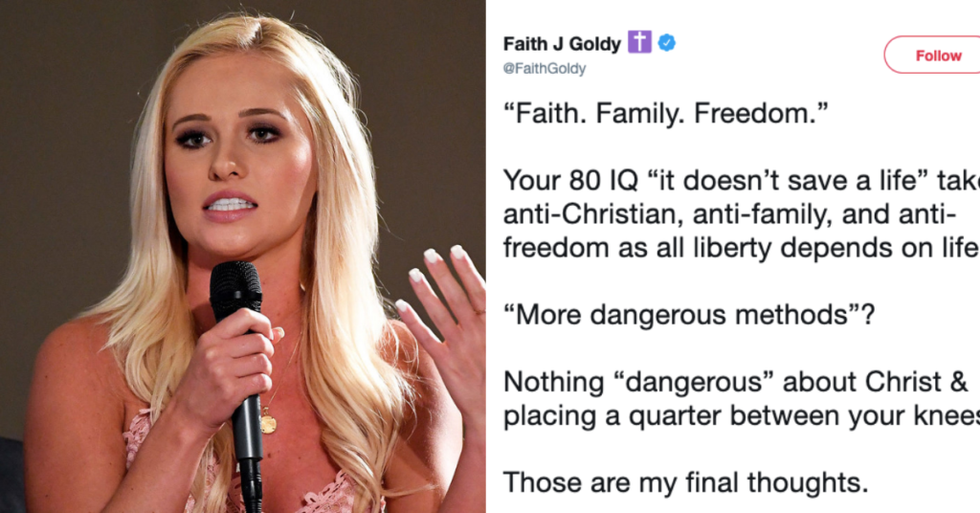 Conservative pundit Tomi Lahren made headlines yesterday after she spoke out against Alabama's ban on all abortions, which outlaws the procedure even in cases of rape or incest and punishes doctors who perform abortions with up to 99 years in prison.

The ban "doesn’t save life, it simply forces women into more dangerous methods, other states or countries," she said yesterday. "You don’t encourage life via blanket government mandate!"

Those words attracted the ire of white nationalist Faith Goldy, who said Lahren's perspective "is anti-Christian, anti-family, and anti-freedom as all liberty depends on life."

"If you think banning abortion with no exception for rape or incest will stop women from terminating pregnancy, you’re not being honest with yourself," she said, warning Goldy against evaluating her "Christian faith based on your moral superiority complex."

If you think banning abortion with no exception for rape or incest will stop women from terminating pregnancy, you’… https://t.co/AbHxa95Njh
— Tomi Lahren (@Tomi Lahren) 1558047733.0

Lahren is one of the most divisive figures on Twitter, but people gave her credit and thanked her for coming out against the law just the same.

@TomiLahren Thank you for choosing to live in the grit of factual reality on this issue.
— Joyce Johnson (@Joyce Johnson) 1558048600.0

Lahren's views on abortion have previously troubled members of the far right.

Lahren admitted that she feels the government has no place weighing in on the abortion debate during a 2017 appearance on The View.

Lahren's views proved so angered conservatives that she was suspended from her show on The Blaze.

Last year, Lahren faced similar criticism after she said that overturning Roe v. Wade “would be a big mistake.” While Lahren said that she’s personally pro-life, she stressed that she believes “it’s not the government’s place to dictate” what women do with their own bodies.