This is how a blue wave builds. 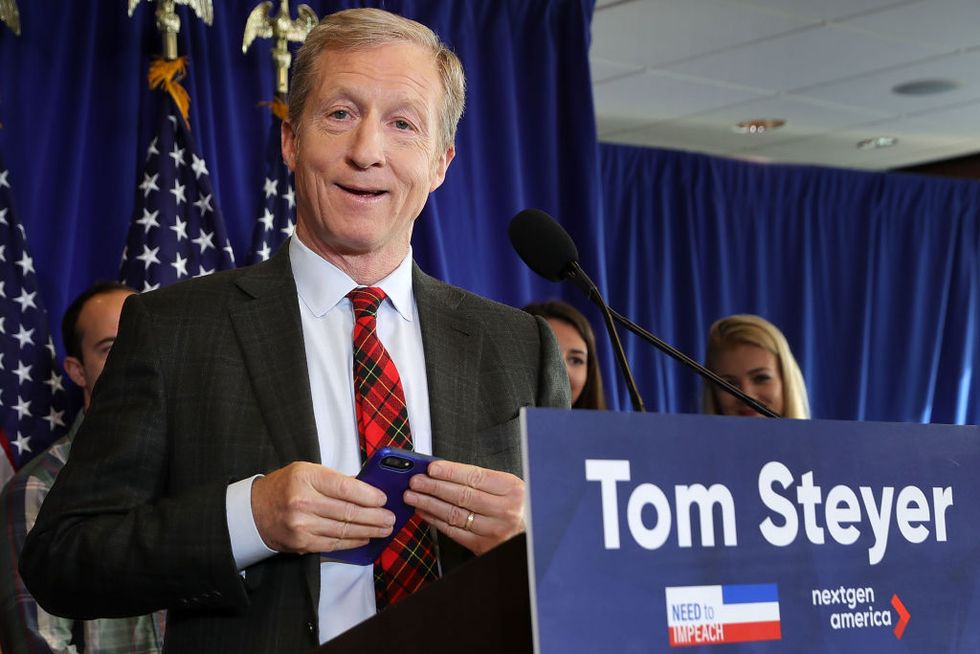 Tom Steyer, the billionaire environmentalist and Democratic political donor who has spent millions on national ads calling for President Donald Trump's impeachment, announced he will spend $30 million through his advocacy group, NextGen America, this year trying to get members of his party elected to the U.S. House of Representatives to win control of the chamber from Republicans.

The $30 million will be used to mobilize young voters in 10 key states: Florida, Virginia, Wisconsin, Michigan, Nevada, California, Pennsylvania, Iowa, New Hampshire and Arizona. Steyer also announced he will not personally be running for office.

Steyer was a major donor to former President Barack Obama’s 2012 campaign and the largest single political donor of the 2014 midterm election. He'd earlier focused on climate change as an issue to rally young voters, but says he will pivot his strategy to focus on the president's impeachment.

“We are really focused on removing this president,” Steyer said. “I am willing to do whatever it takes to help save our country. I feel the most important task for me is organizing. A year ago, no one knew what a Donald Trump presidency would look like, or how he would behave. We now know that the Oval Office cannot reshape a man who does not believe in constitutional democracy.”

Midterm elections are this November, and 34 Senate seats are up for grabs––so are all 435 seats in the House. “The task which I feel called to do is organizing and mobilizing America’s voters – they have got to be the most powerful forces in American politics,” Steyer said. He added that while he knows that talk of impeachment "makes some of our friends and allies in this city uncomfortable" but that removing Trump from office remains of utmost importance.

Millennials will make up the largest voting demographic in 2018 and 2020––and NextGen will focus on its efforts on reaching them. “Young people are overwhelmingly progressive, and energized like never before,” Steyer said. “They are now the largest bloc of eligible voters in America, capable of swinging elections on their own, and they are horrified by what’s happening here in Washington.”

NextGen's focus on the youth vote should pay off handsomely, predicts Amanda Litman, the former Email Director to Hillary Clinton. The $30 million is a "massive investment -- and because voting is a habit, it'll pay dividends for decades to come," she said.

“The White House perspective is outrage and disgust that people who do not know this President or understand the true depth of his intellectual capabilities would be so filled with hate they would resort to something so far outside the realm of reality or decency,” Sanders said in an emailed statement earlier today.