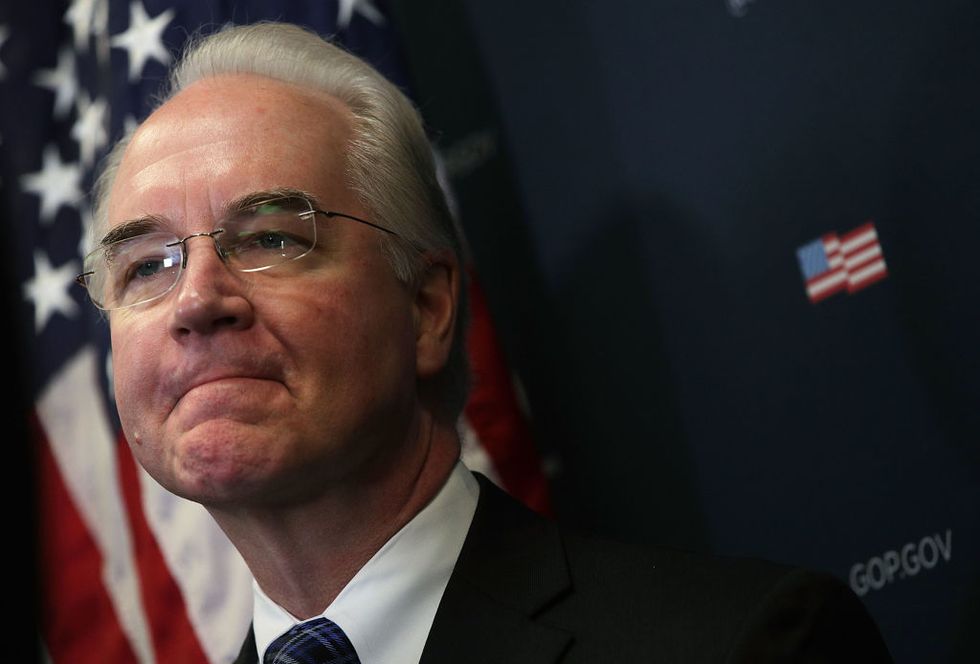 A Politico investigation reported last week that Health and Human Services Secretary Tom Price took at least 26 private-charter domestic flights since May on the taxpayer’s dime, to the tune of more than $400,000. In that same time frame he used military aircraft for White House approved travel to Africa, Asia, and Europe, with his wife in tow, bringing the total taxpayer cost to more than $1 million. In response to criticism from both sides of the aisle, Price pledged to reimburse a fraction of the expensive and excessive travel receipts.

“Today, I will write a personal check to the U.S. Treasury for the expenses of my travel on private charter planes. The taxpayers won’t pay a dime for my seat on those planes,” Price said in a statement, “No exceptions.”

Price pledged that he would no longer take private planes while serving as secretary, though he did not explain how he came to that meager reimbursement of $51,887.31, nor did he address the additional costs of staff and security officials who accompanied him on all those flights. Even though he is reportedly worth $13.6 million, it would seem he is only paying taxpayers back for what he has determined to be the cost of his seat on the planes. Everything else taxpayers are still paying for.

U.S. Senator Ron Wyden of Oregon called out Price on for ripping off taxpayers:

Until @SecPriceMD has paid back the full amount of his private jet flights he is still ripping off taxpayers https://t.co/ckFNMK1fu2
— Ron Wyden (@Ron Wyden) 1506635021.0

Many of Price's domestic flights traveled between cities that offer inexpensive commercial alternatives, which his what his Obama-era predecessor would use. It is also reported that Price attended to personal affairs and excursions while on these business trips. On one occasion, Price arrived 40 hours early for a conference and for nearly two days resided at a resort.

Known as both a fiscal hawk and a staunch opponent of Obamacare, Priced previously backed the White House's proposal to cut $6 billion from the National Institutes of Health.

Since these revelations, House and Senate investigations have increasingly scrutinized Price and the other Cabinet members, pressing them to disclose the extent of their use of noncommercial transportation. Environmental Protection Agency Administrator Scott Pruitt has racked up a $58,000 bill this year alone. Treasury Secretary Steven Mnuchin, personally worth $500 million, is under investigation for using a government plane for a personal visit to Kentucky, as well as New York to Washington trip.

Interior Secretary Ryan Zinke flew from Vegas to his home in Montana on a private plane owned by a oil-and-gas exploration firm for the taxpayer price tag of $12,375, which otherwise commercially would've cost around $300. Zinke also chartered numerous private flights while in the Virgin Islands, as well as after attending to personal business in Nevada, where he was appeasing his biggest donor from his two previous congressional campaigns.

When asked if Price might lose his job in the aftermath of these revelations, President Trump replied, “We’ll see.”

On Thursday, Senate Judiciary Committee Chairman Charles E. Grassley requested that the Trump administration impose a government-wide ban on the use of charter flights by administration officials, as well as a response to these misappropriations of taxpayer money with "steps the administration has taken to ensure that Cabinet secretaries use the most fiscally responsible travel in accordance with the public trust they hold and the spirit and the letter of all laws, regulations, and policies that apply.”

In response, White House press secretary Sarah Huckabee Sanders clarified that the Trump administration does not actively involve itself in the approval of private charter flights by Trump's own Cabinet members. “That’s something we’re certainly looking into from this point forward," she added.