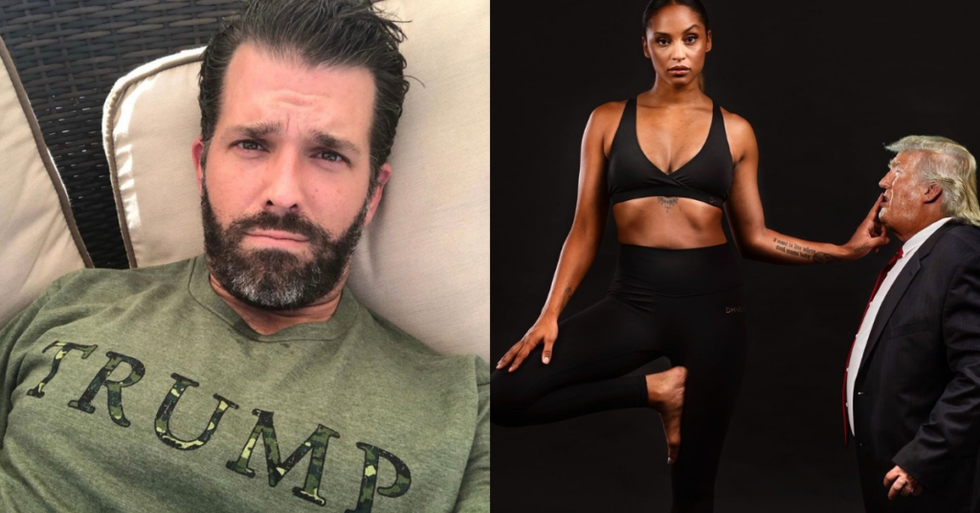 The Trump administration's record on women's rights is abysmal. The President's personal record with women is even worse.

The "grab 'em by the p***y" declaration over a hot mic whilst describing a record of sexual harassment and assault, payments of hush money to multiple women and allegations of sexual misconduct against the President by 25 more make him a likely target in any ad campaign aimed at women featuring the hashtag #StandForSomething.

But after Dhvani Activewear unveiled their ad campaign, First Son Donald Trump Jr. cried foul.  Referencing media coverage of the video created by Trump supporters and played at an event held at a Trump property—in which the President is depicted murdering media organizations as well as individual US citizens—Jr. tweeted:

"Hey [New York Times] and [mainstream media]. Since you had time to thoroughly cover a stupid and tasteless meme seen by 8 people with incredible outrage, I figured you should dedicate the same time and outrage to THIS BILLBOARD IN TIMES SQUARE you hypocrites!

Unless of course you’re just full of sh**."

In the various posts, they explain what issues they take exception with regarding the Trump administration.

Will you #StandForSomething? Visit DHVANI.com/StandForSomething for more info. . **DHVANI produced the images of this campaign to artistically express the frustrations we believe many women share. All images are metaphorical in nature only. DHVANI does NOT and will NEVER condone violence of ANY KIND.**

It was a substantial list of grievances. Donald Jr.'s objections either missed them or did not care, however.

The video meme he compared the Dhvani images to was based on targeting people who criticized or fact checked the President.

This is not OK. Attacking Gold Star families is not OK. Mocking a disabled American on national TV is not OK. Referring to America’s allies as “shithole countries” is not OK. Calling white supremacists “very fine people” is not OK. Handing your billionaire friends massive handouts in the form of tax cuts paid for by ordinary Americans is not OK. Calling US Congresswomen of color "savages" and telling them to "go back and help fix the totally broken and crime infested places from which they came" is not OK. Consistently trying to sabotage the Affordable Care Act, threatening coverage for millions of American women is not OK. A “Gag Rule” silencing doctors & nurses from providing reproductive healthcare information to their fellow Americans is not OK. None of this is OK. For nearly three long and tiring years, our American patriotism has been exploited. We were told by our current President that he would “make America great again.” Instead, we have a nation more divided than ever before and further away from the ideals that make America truly ‘great.’ Enough is enough. We’re taking a stand. We’re standing up for a woman’s right to choose, which is the law of the land. We’re standing up for women and LGBTQ+ rights. We’re standing up for the un- & under-insured’s ability to access affordable reproductive care. We’re standing up for every American’s right to a healthy life, liberty, and the pursuit of happiness. Starting today, DHVANI will donate a percentage of our sales to non-profit organizations that support access to reproductive healthcare and fight Trump’s Title X gag rule in Congress. DHVANI is prepared for the fight of our lives. Will you #StandForSomething with us? . **DHVANI produced the images of this campaign to artistically express the frustrations we believe many women share. All images are metaphorical in nature only. DHVANI does NOT and will NEVER condone violence of ANY KIND.**

A specific bone of contention highlighted by the activewear company was Title X rollbacks under Trump. Especially the "gag rule."

"Today, DHVANI is taking a stand against the Trump administration's Title X “Gag Rule". Established in 1970 with bipartisan support, the Title X program provides affordable birth control and reproductive health care to people with low incomes. Trump's Gag Rule, which directly opposes federal law, silences healthcare professionals, preventing them from providing information on where and how to access reproductive healthcare to over 4 million American women."

During the 1936 Berlin Olympic games, when Hitler was in full power, the founder of German company Adidas asked the legendary Jesse Owens to compete while wearing shoes he designed - an act of rebellion. . In 2018, when Colin Kaepernick took a knee and started a movement, Nike embraced him and amplified his message - at great cost and risk. . Today, DHVANI is taking a stand against the Trump administration's Title X “Gag Rule". Established in 1970 with bipartisan support, the Title X program provides affordable birth control and reproductive health care to people with low incomes. Trump's Gag Rule, which directly opposes federal law, silences healthcare professionals, preventing them from providing information on where and how to access reproductive healthcare to over 4 million American women. . One of the most beautiful things about America is that we are all free to make our own choices. If you disagree with our stance, vote with your dollars by shopping elsewhere. If you are with us, please join us at http://DHVANI.com/StandForSomething as we #StandForSomething together. . *DHVANI produced the images of this campaign to artistically express the frustrations we believe many women share. All images are metaphorical in nature only. DHVANI does NOT and will NEVER condone violence of ANY KIND.

Dhvani Activewear also shared their Times Square billboard with an explanation for the thought process and reasoning behind it.

“Lady Liberty” is now on display in Times Square, New York City. . You can view it on the corner of 7th Avenue and 48th Street. (📷: AP Photo/Ted Shaffrey) . A Letter From The CEO: . “As you know, we’re extremely passionate about creating high-quality, fashionable and innovative products in the most sustainable and ethical ways possible. We will always strive to improve the comfort, fit, and quality of DHVANI products and we proudly believe that everyone deserves to feel comfortable and beautiful in their own skin. That will never change. . But the state of the world weighs heavily on us. There is a palpable tension in the air these days. As a Portland, Oregon-based company, we have been uncomfortably close to a clash of ideals that we can no longer just sit back and watch. That’s why we’ve decided to #StandForSomething and become the world’s first and only Activ(ist)Wear™ company. . DHVANI is a brand for people who are committed to making the world a better place. As of today, with each purchase, we donate to a featured nonprofit partner. The time has come to take action each and every day. We invite you to join us as we #StandForSomething together. . We recently learned that, despite originally being blocked by federal courts, the Trump administration has imposed a Title X gag rule that leaves people of color, people with low incomes, and those living in remote or rural areas with nowhere to go for reproductive healthcare. This is a targeted blow to the over 4 million patients who obtain birth control, cancer screenings and other essential care through Title X. We simply cannot stand for this. . You’ll notice some significant changes at DHVANI.com. We’re not afraid to make bold statements by exercising our first amendment rights. We realize that some of our customers won’t agree with us. We understand and respect our differences in opinion. . Join us and stand with DHVANI as we give a portion of every sale to non-profit organizations to help provide healthcare to women in need and to fight Trump’s gag rule in Congress.” . *DHVANI does NOT condone and will NEVER condone violence of ANY KIND.

Despite his complaints on Twitter, Donald Jr. found few allies online outside the MAGA crowd.

Although there were Trump supporters invoking God in the President's defense.

But many dropped off radar pretty quickly when questioned about their claims, leaving people to answer their own questions.

@CallerTime @AlexandraLevi20 @DonaldJTrumpJr @nytimes I wonder if she’s confusing Giuliani with trump and has some… https://t.co/1aVbRPewhD
— tinfoil crown (@tinfoil crown) 1571457609.0

People used the same reasoning the Trump administration has in the past—to support White supremacy and White nationalism—to support the billboard.

@DonaldJTrumpJr @nytimes That’s called Free Speech. The people will decide if its inappropriate and react according… https://t.co/kwlWh58cQv
— RibelleGS (@RibelleGS) 1571575237.0

Dhvani’s CEO, Avi Brown—who identified the woman in the billboard as teacher and US Marine Corps veteran Michal Mesa—told the Associated Press:

"We are on the right side of history. The billboard is an expression of our First Amendment right. Its art is a symbol. We would never condone violence. This is about taking our country back."

Brown added in relation to the imagery of gags and tying Trump's hands:

"[President Trump] unilaterally has created a gag rule that you cannot refer patients with reproductive information about abortion, sex ed, and contraception. He’s gagging doctors and nurses, and telling them what they can and cannot tell patients."

The book The Day the Women Got the Vote: A Photo History of the Women's Rights Movement is available here.