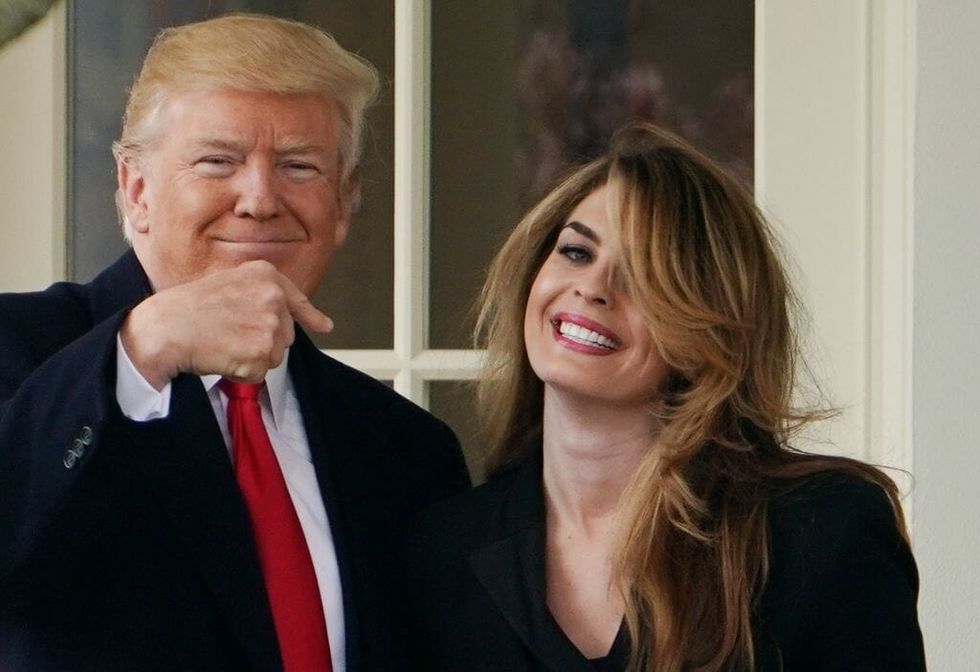 US President Donald Trump points to former communications director Hope Hicks shortly before making his way to board Marine One on the South Lawn and departing from the White House on March 29, 2018. Trump is visiting Ohio to speak on infrastructure development before heading to Palm Beach, Florida. / AFP PHOTO / Mandel NGAN (Photo credit should read MANDEL NGAN/AFP/Getty Images)

Media bias is something  that is raised often about, and by, mass media. After The New York Times shared a story about former White House Communications Director Hope Hicks and her decision regarding a congressional subpoena, The Times was hammered online for media bias.

"...the bias or perceived bias of journalists and news producers within the mass media in the selection of many events and stories that are reported and how they are covered."

Here's The Times social media post that is drawing so much criticism.

Veteran correspondent Soledad O'Brien stated in regards to the piece:

"This is a good example of bias in [The New York Times]: a picture of a person who is considering not complying with a subpoena is basically a glam shot, and it’s framed as a thoughtful, perfectly equal choice."

This is a good example of bias in the @nytimes: a picture of a person who is considering not complying with a subpo… https://t.co/juvZCtsUp4
— Soledad O'Brien (@Soledad O'Brien) 1558868357.0

"There is nothing for Hope Hicks to 'decide.' She got a subpoena from Congress. Were she not white, wealthy, and connected, we wouldn’t be having this conversation. She would appear, or she would face the threat of prison like the rest of us. As she should."

"I’ll add this framing of it as an 'existential question' is infuriating. People who face those in America are transgender folks who see their very selves being legislated out of existence, or abortion patients in states who would imprison or kill them for it, because 'pro-life'."

He also called on journalists to do better.

"Black folks here have faced existential questions, quite literally, for 400 years. Indigenous people for even longer. I don’t want to belabor this, but we must think more critically—especially when evaluating President Trump and his collaborators. We are writing in permanent ink."

That the Paper of Record would profile Hicks as if she has a legitimate choice as to whether or not she should comp… https://t.co/MXx3YH7sDH
— Jamil Smith (@Jamil Smith) 1558884234.0

Former war correspondent and news anchor Dan Rather also weighed in. He tweeted:

Reporting on whether one should comply with a Congressional subpoena should not be framed like a Hamlet soliloquy.… https://t.co/ZQcXgy5V3z
— Dan Rather (@Dan Rather) 1558890387.0

People took journalist Maggie Haberman to task for her article's spin and treatment of Hicks, including the choice of photo. The New York Times treatment of women without Hicks' advantages and privilege was cited.

Oh ha. Didn’t even realize who wrote it. Imagine having people write about your decision to answer a subpoena as an… https://t.co/glFMUBrz3v
— Soledad O'Brien (@Soledad O'Brien) 1558886823.0

Maggie Haberman is the worst journalist in America and her fellow journalists think she’s amazing, which should tel… https://t.co/ATgf8cwFXh
— Oliver Willis (@Oliver Willis) 1558875017.0

Other missteps by The Times were raised.

Read the NYT’s story on Hope Hicks and her supposed “existential question.” This story is bad on many levels. Edito… https://t.co/miFjbOzlHE
— Steven Aquino (@Steven Aquino) 1558976280.0

And people asked The Times to remember this article the next time a person of color was criticized for not complying.

The next time a Black man decides not to comply with a subpoena, I want @nytimes to do a fucking glamour shot piece… https://t.co/e7UgLdbIhF
— Desiree Adaway (@Desiree Adaway) 1558886674.0

Hi. Lawyer here. This isn’t an existential question. This is law. Failure to comply is Contempt of Congress. Look i… https://t.co/VX380DPVFo
— Michelle Bhasin (@Michelle Bhasin) 1558875265.0

Neither The New York Times nor Maggie Haberman have responded to the criticism yet.