1,600 Men Paid Tribute to Anita Hill by Taking Out an Ad in the New York Times In Support of Christine Blasey Ford 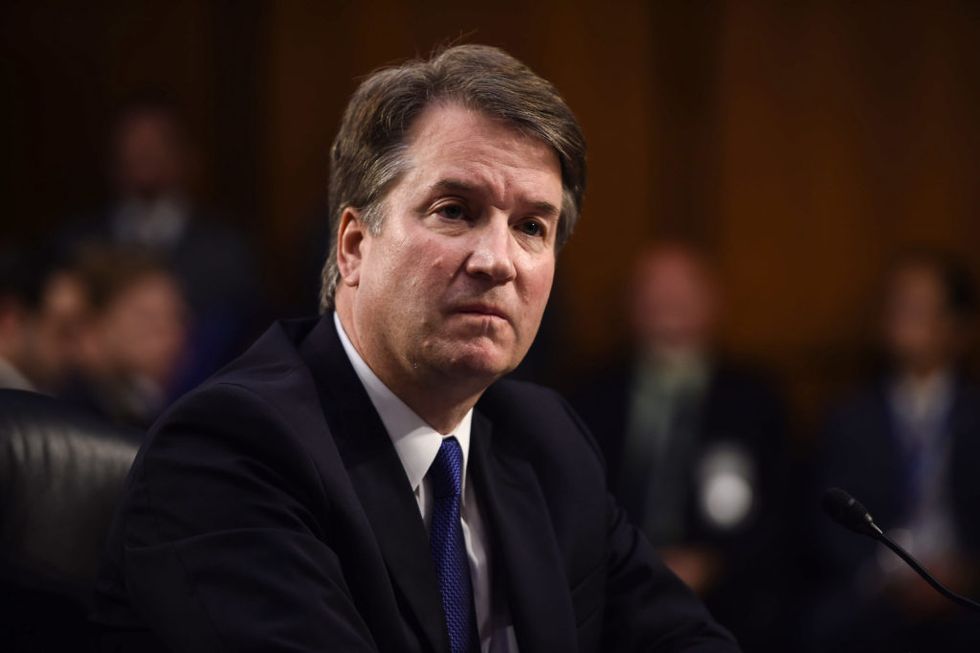 1,600 men took out a full-page ad in The New York Times to voice their support for Dr. Christine Blasey Ford, the Stanford University professor who alleges Supreme Court nominee Brett Kavanaugh sexually assaulted her at a party when they were high school students,  in a move which mirrors a similar ad placed in the same newspaper by women 27 years ago to honor Anita Hill, whose testimony regarding the sexual harassment she endured while employed by Justice Clarence Thomas has taken on a sobering resonance in the #MeToo era.

Pictured below is the ad women took out for Anita Hill in 1991, in which those who participated proclaimed they were "outraged by the racist and sexist treatment of Professor Anita Hill, an African American woman who was maligned and castigated for daring to speak publicly of her own experience of sexual abuse":

And here we have its direct descendant:

"We are 1,600 men who now stand behind Professor Anita Hill, as well as Dr. Christine Blasey Ford, because we believe them," the ad reads.

"As men who are allies in the fight to end violence and harassment against women and girls, we write to express our strong support of Dr. Christine Blasey Ford for her willingness to speak out publicly and testify before the Senate about the sexual assault that she says was perpetrated against her by Judge Brett M. Kavanaugh," it continues.

Furthermore, the ad calls on "all men of good will to stand with us to ensure that Dr. Blasey Ford's story is carefully and fully examined without bias or prejudice," and "demands that both Dr. Blasey Ford and her story be treated fairly, impartially, and with respect."

The names, along with the current cities of the 1,600 men, are placed behind a centered text box. The ad was paid for by funds raised by The Phenomenal Woman Action Campaign. Yesterday, more than 3,000 donors helped the group exceed their fundraising goal of $100,000 by more than $34,000. Excess funds will go toward violence prevention programming.

Several notable names took part in the ad, including Tallahassee's Democratic Mayor Andrew Gillum, who is currently running for governor in Florida, and Shin Inouye, the director of communications for the Leadership Conference on Civil and Human Rights (a group which firmly opposes Kavanaugh's nomination to the nation's highest court).

The ad quickly made the rounds on social media.

Dr. Daniel Grossman, a clinical and public health researcher on abortion and contraception declared his support for not just Anita Hill and Dr. Ford, but for Deborah Ramirez (a former classmate of Kavanaugh's at Yale University who alleges he exposed himself to her at a fraternity party) and Julie Swetnick (who in a sworn statement said she was a “victim of one of these ‘gang’ or ‘train’ rapes where Mark Judge and Brett Kavanaugh were present” at a party in D.C. in approximately 1982).

Dr. David Surratt, the Interim Associate Vice Chancellor at the University of California, Berkeley, did the same.

Jodi Jacobson, the editor-in-chief of Rewire News, praised her 19-year-old son, who is one of the ad's signatories.

Dr. Ford is set to testify at 10 a.m. this morning. In her opening statement, released ahead of her appearance, she lays her feelings bare:

“I am here today not because I want to be. I am terrified. I am here because I believe it is my civic duty to tell you what happened to me while Brett Kavanaugh and I were in high school…

My hope was that providing the information confidentially would be sufficient to allow the Senate to consider Mr. Kavanaugh’s serious misconduct without having to make myself, my family, or anyone’s family vulnerable to the personal attacks and invasions of privacy we have faced since my name became public. In a letter on August 31, 2018, Senator Feinstein wrote that she would not share the letter without my consent. I greatly appreciated this commitment. All sexual assault victims should be able to decide for themselves whether their private experience is made public.”

The hope for many is, of course, that Dr. Ford's testimony will not be in vain. But Anita Hill's was; the Senate confirmed Thomas in a 52-48 vote. This was the narrowest margin since the 19th century. And Hill has found herself center stage once more now that the allegations against Kavanaugh threaten to usher in a repeat of recent history.

“The American public really is expecting something more,” she said in an interview on ABC’s “Good Morning America" last week.

“We are really under the impression that the Senate doesn’t take this seriously and doesn’t see this as part of their core responsibility,” she added.

“All of this is really something that I don’t think can be avoided if you really want to get to the truth, if that’s the purpose of this hearing,” Hill said, further noting that history could repeat itself with Kavanaugh and Blasey, “whether or not it is going to be anything more than just a sham proceeding so that the senators can say, ‘We gave her a chance to talk,’ and then move on to doing exactly what they were intending to do before she came forward.”

Hill also wrote an op-ed in the New York Times urging lawmakers not to repeat their mistakes:

"As that same committee, on which sit some of the same members as nearly three decades ago, now moves forward with the Kavanaugh confirmation proceedings, the integrity of the court, the country’s commitment to addressing sexual violence as a matter of public interest, and the lives of the two principal witnesses who will be testifying hang in the balance. Today, the public expects better from our government than we got in 1991, when our representatives performed in ways that gave employers permission to mishandle workplace harassment complaints throughout the following decades. That the Senate Judiciary Committee still lacks a protocol for vetting sexual harassment and assault claims that surface during a confirmation hearing suggests that the committee has learned little from the Thomas hearing, much less the more recent #MeToo movement.

With the current heightened awareness of sexual violence comes heightened accountability for our representatives. To do better, the 2018 Senate Judiciary Committee must demonstrate a clear understanding that sexual violence is a social reality to which elected representatives must respond. A fair, neutral and well-thought-out course is the only way to approach Dr. Blasey and Judge Kavanaugh’s forthcoming testimony. The details of what that process would look like should be guided by experts who have devoted their careers to understanding sexual violence. The job of the Senate Judiciary Committee is to serve as fact-finders, to better serve the American public, and the weight of the government should not be used to destroy the lives of witnesses who are called to testify."

Complicating matters are the calls for an FBI investigation which have only continued to mount despite opposition from both Senate Republicans and the White House. Attorneys for Dr. Ford are insisting that the FBI should investigate her allegation despite pushback from Republicans who have claimed that to initiate an investigation would significantly delay a vote which has already been postponed. This reasoning has already been shown to be faulty: The FBI investigation of Anita Hill’s allegations that Justice Thomas sexually harassed her when he was her supervisor at the United States Department of Education and the Equal Employment Opportunity Commission only took three days.

President Trump has remained steadfast, however, and he has not shied away from dismissing allegations of sexual misconduct against Kavanaugh as “totally political.” The White House released a statement from Kavanaugh in response to the latest claims from Swetnick.

“This is ridiculous and from the Twilight Zone,” the statement said. “I don’t know who this is and this never happened.”