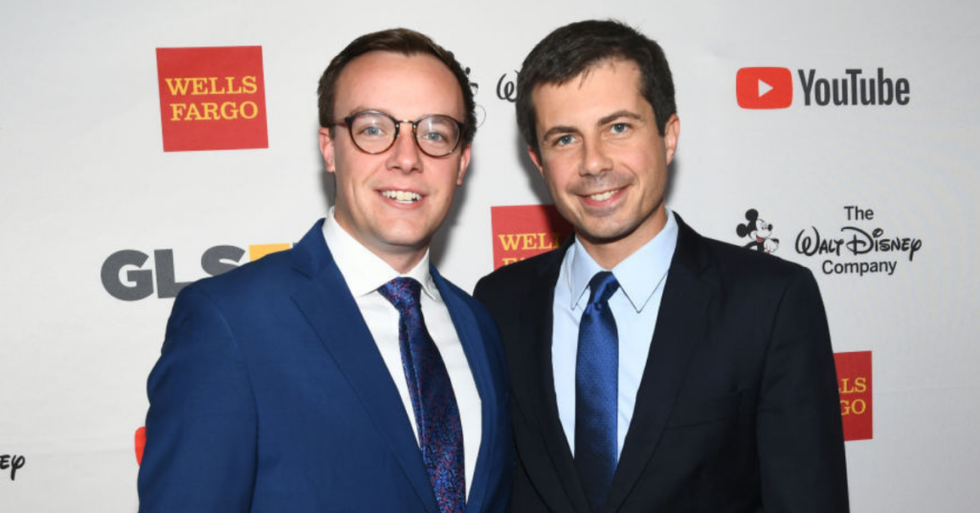 Democratic presidential candidate Pete Buttigieg, the mayor of South Bend, Indiana, and his husband, teacher Chasten Glezman, have landed the latest cover of TIME Magazine as support for Buttigieg's campaign continues to mount.

TIMEwrites that Buttigieg "may just be the man to vanquish America’s demons":

"In a field of more than 20 ­candidates­—including six Senators, four Congressmen, two governors and a former Vice ­President—Buttigieg (pronounced Boot-edge-edge) has vaulted from near total obscurity toward the front of the Democratic pack, running ahead of or even with more established candidates and behind only Joe Biden and Bernie Sanders.

Buttigieg is a gay Episcopalian veteran in a party torn between identity politics and heartland appeals. He’s also a fresh face in a year when millennials are poised to become the largest eligible voting bloc. Many Democrats are hungry for generational change, and the two front runners are more than twice his age."

Of Buttigieg's relationship with––and marriage to––Glezman, TIME has this to say:

"Buttigieg met Chasten Glezman, then a Chicago grad student, on the dating app Hinge in 2015. They talked over FaceTime for a few weeks before Chasten drove to South Bend for their first real date, at an Irish bar famous for its Scotch eggs. Less than three years later, Pete proposed in gate B5 of Chicago’s O’Hare airport, the exact spot where Chasten had first noticed his dating profile.

Their marriage is at once banal and extraordinary, infused with the exuberant contentment of two people who once thought they would always be alone."

TIME's cover is already making a splash, and for many, the decision to place a married gay couple––let alone such a high profile one––is an example of long-awaited representation the LGBT community has long been denied.

No matter the outcome of @TheDemocrats primary, Mayor @PeteButtigieg has already won for what he’s done for young… https://t.co/XzSJEk07al
— Anthony Scaramucci (@Anthony Scaramucci) 1556798972.0

Support for Buttigieg has risen despite regular attacks from the Christian right. Earlier this month, the presidential candidate issued a short and sweet response after protesters chanting “Sodom and Gomorrah” interrupted him at an Iowa campaign rally.

An organized effort led by Randall Terry, a Christian activist who founded the anti-abortion rights group Operation Rescue, attempted to detract from the event by shouting about the Biblical cities destroyed by God’s wrath. But the crowd of more than 1,600 Buttigieg supporters drowned them out by chanting Buttigieg’s name.

Once the ruckus died down, Buttigieg, the first openly gay man in American history to run for the nation’s highest office, smiled and said: “The good news is, the condition of my soul is in the hands of God, but the Iowa caucuses are up to you.”

Buttigieg also made headlines when he took on Vice President Mike Pence’s attitude toward homosexuality. The ultra-conservative Pence has come under fire for his ties to such groups as the socially conservative Family Research Council, which denounce and characterize homosexuality as “attacks” on “traditional” marriage. He has also faced heated criticism for his views on transgender rights and conversion therapy.

But Buttigieg, during a speech at the LGBTQ Victory Fund’s annual brunch in Washington, says his marriage to Glezman, has made him “a better human being.”

“It has made me more compassionate, more understanding, more self-aware, more decent. My marriage to Chasten has made me a better man. And yes, Mr. Vice President, it has moved me closer to God,” he said.

Buttigieg recalled that there was a time in his life when he wished he could have taken “a pill to make me straight,” but said those feelings are long past him.

“Speaking only for myself, I can tell you that if me being gay was a choice, it was a choice that was made far, far above my pay grade,” he said. “And that’s the thing I wish the Mike Pences of the world would understand, that if you’ve got a problem with who I am, your problem is not with me. Your quarrel, sir, is with my creator.”