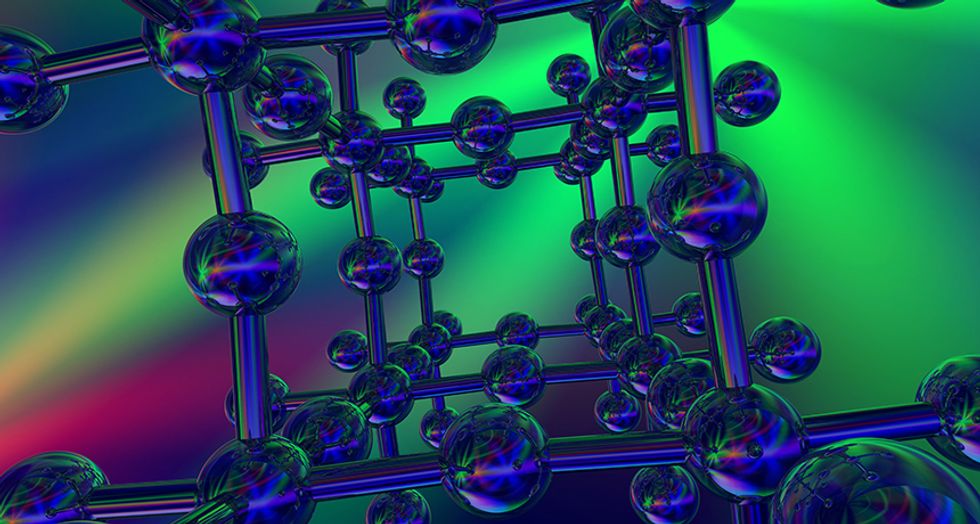 Less than five years ago, Nobel-Prize winning theoretical physicist Frank Wilczek proposed a hypothetical form of matter that added a fourth dimension—movement in time—to a crystal, which he called a “time crystal,” an entirely new form of matter. Wilczek theorized that if crystals have an atomic structure that repeats in space, similar to the carbon lattice of a diamond, why can't crystals also have a structure that repeats in time—hence, a time crystal? Last year, theoretical physicists at Princeton University and UC Santa Barbara’s Station Q both proved independently of each other that such a crystal could be made. The UC Berkeley group was “the bridge between the theoretical idea and the experimental implementation,” according toNorman Yao, assistant professor of physics at the University of California, Berkeley, who has done a great deal of work on time crystal theory.

Yao took the theory to the next step and published apaper in Physical Review Letters describing how to make and measure the properties of this type of crystal, even predicting the possible “phases” the time crystal should experience – best compared to the liquid and gas phases of ice. These crystals have a remarkable atomic structure that repeats not just in space, but in time, which means that they “move” or, more technically, enter a state of disequilibrium, without any added energy.

Now this mythical sounding concept has been made a reality by two teams of researchers in collaboration with Yao, at the University of Maryland and Harvard University, who have successfully created this new form of matter based off Yao’s blueprint.

But first let’s take a step back to the short history of time crystal theory. Physicists have spent decades trying to understand why certain crystals and magnets appear to violate a fundamental law of physics calledtime-translation symmetry when they enter their “ground state”—where atoms are at their lowest possible energy—resulting in asymmetry. This means that their repeating structural patterns appear to be the same at certain angles but not others depending upon the vantage point.

“From the perspective of quantum mechanics, electrons can form crystals that do not match the underlying spatial translation symmetry of the orderly, three-dimensional array of atoms,”Yao said. “This breaks the symmetry of the material and leads to unique and stable properties we define as a crystal.”

Time crystals take this a step further. “Time crystals repeat in time because they are kicked periodically, sort of like tapping Jell-O repeatedly to get it to jiggle,”Yao said. It's essentially incapable of sitting still, engaging in oscillations of various kinds.

Most of us are familiar with “equilibrium matter”—this comprises known materials, such as metals and insulators, which have stable and predictable atomic structures. However, quantum researchers have theorized that there are much more types of matter in the Universe that do not exist in equilibrium, including time crystals. Time crystals offer "a new phase of matter, period, but it is also really cool because it is one of the first examples of non-equilibrium matter,”Yao said. This new class of materials may open a whole new realm of research for quantum physics.

Time crystals also have the theoretical ability to hold nearly perfect memories which could be used in quantum computers.

To make their time crystals, the team at the University of Maryland, led by physicist Chris Monroe and his colleagues, strung 10 ytterbium ions together.Ytterbium is a rare element that derives from the mineral gadolinite. Swedish chemist, Carl Gustaf Mosander was able to separate gadolinite into three materials, which he named yttria, erbia and terbia. The Harvard team chose this element because ytterbium’s electron spins are entangled, meaning they interact with each other. To keep these ions out of equilibrium, researchers struck them first with one laser to create a magnetic field, and a second laser to flip the spins of the atoms. Since the ytterbium atom spins were entangled, the atoms settled into a predictable, repetitive pattern of “spin flipping” that defines a normal crystal.

To qualify as a time crystal, the system had to break time symmetry. Under different magnetic fields and laser pulsing, researchers were able to nudge the ytterbium atoms to produce a repetition in the system at twice the period of the nudges, something that couldn't occur in a normal system, breaking symmetry. This caused the crystal to change phase, like an ice cube melting.Yao worked closely with Monroe while the Maryland team made the new material, emphasizing the important properties to measure to confirm that the material was, in fact, a stable or rigid time crystal. Yao also predicted what eventually did come to pass, that the time crystal would change phase, like an ice cube melting, under different magnetic fields and laser pulsing.

Time crystals are understood as a kind ofloophole in the law of physics, by existing in motion without energy consumption — a spontaneous break in time-translation symmetry —yet observable in time. However, the movement made by time crystals neither consumes energy, nor produces any.

The Harvard team, led by physicist Mikhail Lukin, createdits time crystal by using densely packed nitrogen-vacancy centers in a nanobeam made from black diamonds, then illuminated by a focused green laser beam and irradiated by a microwave source. The results of their experiment have not yet been published but will be soon.

"Such similar results achieved in two wildly disparate systems underscore that time crystals are a broad new phase of matter, not simply a curiosity relegated to small or narrowly specific systems,"explained Phil Richerme of Indiana University, a researcher who is not affiliated with the time crystal studies, in a perspective piece accompanying the paper.

"Observation of the discrete time crystal... confirms that symmetry breaking can occur in essentially all natural realms, and clears the way to several new avenues of research,” he concludes.

Meanwhile, Yao plans to continue with his work to create his own time crystals.