John Kerry Was in Utter Disbelief at This Republican Congressman's Bizarre Line of Questioning, and We're Right There With Him 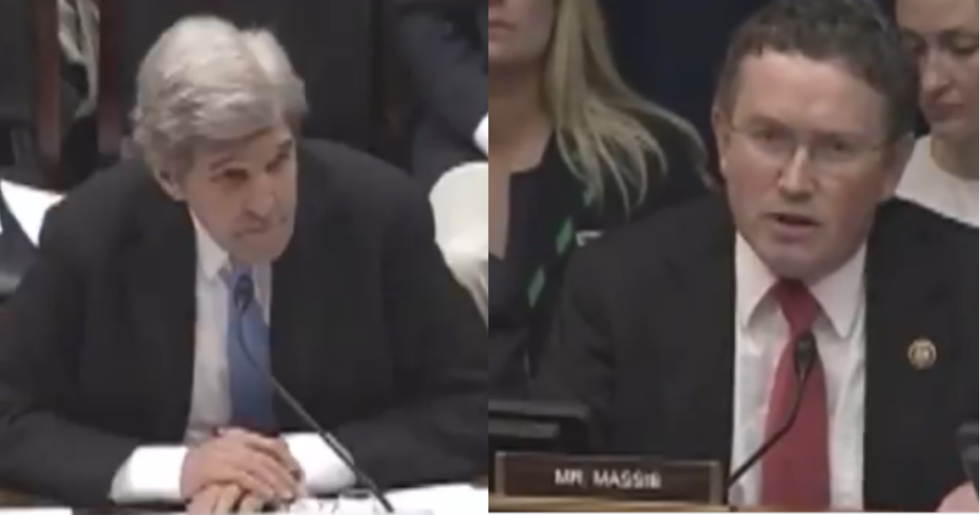 Former Secretary of State John Kerry became exasperated with a Republican Congressman who challenged his expertise on climate change during a House Oversight Committee hearing on Tuesday.

Kerry appeared as a witness to push for American leadership on the growing environmental threat. He was subjected to hours of grilling by Republicans who continue to deny the global consensus on climate science.

Representative Thomas Massie of Kentucky, who holds two electrical engineering degrees from MIT, tried to discredit Kerry, an architect of the Paris Climate Accord, by calling into question how Kerry's college education qualifies him to be a leader on the subject.

"Secretary Kerry, I want to read part of your statement back to you: 'Instead of convening a kangaroo court, the president might want to talk with the educated adults he once trusted to fill his top national security positions.' It sounds like you’re questioning the credentials of the president’s advisers currently, but I don’t think we should question your credentials today. Isn’t it true you have a science degree from Yale?"

Kerry knew this would not end well:

Kerry: "A bachelor of arts degree."

Massie: "Is it a political science degree?"

Then, things began to unravel.

Watch this for your morning laugh. @RepThomasMassie is apparently serious but this is the dumbest line of questioni… https://t.co/oQ4s5UqrMP
— Bakari Sellers (@Bakari Sellers) 1554896848.0

"So how do you get a bachelor of arts in a science [degree]?" Massie pressed.

Massie: "OK, so it’s not really science. So I think it’s somewhat appropriate that someone with a pseudoscience degree is here pushing pseudoscience in front of our committee today."

Kerry was not having it.

"Are you serious? This is really, seriously happening here?" he asked.

Massie: "You know what? It is serious, you’re calling the president’s Cabinet a kangaroo court, is that serious?"

Massie: "Are you saying he doesn’t have educated adults there now?"

Kerry: "I don’t know who it is yet, because it’s secret... why does the president have to have a secret analysis on climate change?"

Kerry's dismay is all of us.

@Bakari_Sellers @RepThomasMassie Thank you @JohnKerry we need voices of reason to break though the absurdity of this administration.
— Justice Beaver (@Justice Beaver) 1554904349.0

Massie earned two MIT degrees and still has no clue how science works.

Or politics, for that matter.

The Washington Post reported on Wednesday that Massie had also asked Kerry why humans should be concerned about the climate since carbon dioxide levels have been higher in the distant past.

Kerry noted the difference between then and now.

“But there weren’t human beings; that was a different world, folks," Kerry replied.

Massie, undeterred, followed up: “Did geology stop when we got on the planet?”

A frustrated Kerry rebutted: “This is just not a serious conversation.”

Kerry was also asked how the United States should pay for the Green New Deal - a series of proposed goals for transforming our energy grid and combating income inequality - that was introduced in February by Alexandria Ocasio-Cortez, the freshman firebrand Democrat from New York.

Kerry did not miss a beat.

“Congresswoman Ocasio-Cortez has in fact offered more leadership in one day or one week than President Trump has in his lifetime on this subject,” Kerry said. “And my question is, where is your proposal? Did you have any hearings on it in the last few years? Mostly on Benghazi, if I recall."