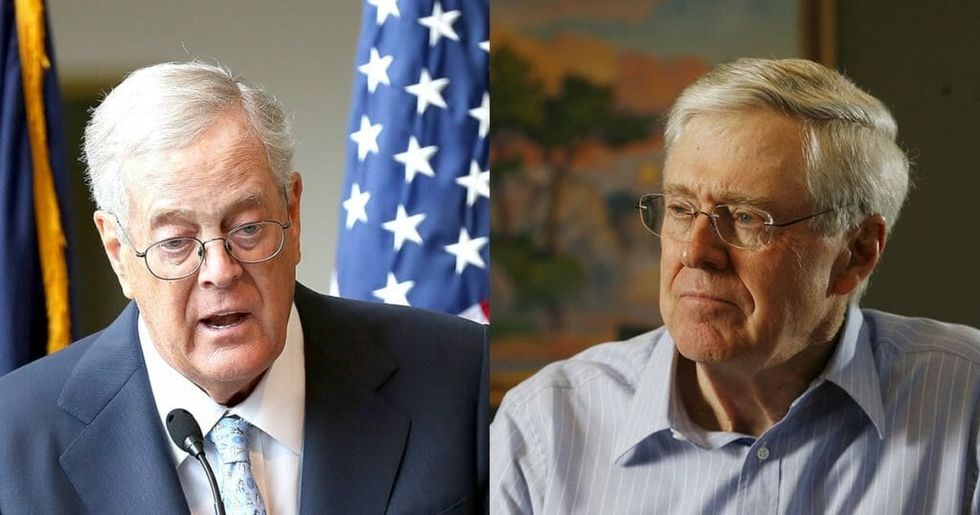 This article has been updated from its original post by the Second Nexus editors on 1/29/15.

In 2012, I donated to help my candidate win, and hoped my party would hold on to some key seats in the House and Senate. Granted, it wasn't a lot of money--probably under $50 total. But I felt I'd done my part. I was one of the over 3 million people who put their money behind their beliefs. As it turns out, I might as well have been throwing my money into the wind.

In 2014, billionaire brothers Charles and David Koch bulldozed our national electoral landscape, delivering a decisive blow to Democrats in the midterms. Capitalizing on the U.S. Supreme Court's Citizens United decision, which uncapped political campaign spending limits, the Kochs essentially bankrolled the Republican take-over of the Senate with their PACs' “dark money.”

In particular, two organizations spearheaded by the brothers, Americans for Prosperity (AFP) and Freedom Partners Action Fund, a super PAC, helped the GOP clinch competitive Senate and House races by funding almost 44,000 advertisements aimed at November’s midterm elections alone. "The two groups at the heart of the Koch brothers' political network spent a combined $100 million on competitive races in 2014,” spokesperson for the organizations told the National Journal. Politico.com commented, “The vast network of political nonprofit groups they helped build has mostly funneled its unprecedented political spending into issue-based campaigns that usually slam Democrats for supporting big government.” So deep-seated was their involvement, 2014 was dubbed “The Year of Koch.”

This massive funding traces its roots to the Koch brothers' expansive financial empire. According to The New Yorker’s Jane Mayer, “The Kochs operate oil refineries in Alaska, Texas, and Minnesota, and control some four thousand miles of pipeline. Koch Industries owns Brawny paper towels, Dixie cups, Georgia-Pacific lumber, Stainmaster carpet, and Lycra, among other products.”  The “Koch-topus” boasts a reach across the entire nation and beyond, like a gnarled root system, spreading into various corporate conglomerates and, recently, making naked grabs at government influence. Daniel Schulman, author of Sons of Wichita: How the Koch Brothers Became America's Most Powerful and Private Dynasty, told NPR “this is a family that is much more significant than a lot of people realize, and their impact is going to be felt long into the future.”

With the November races, Republicans seized control over both the Senate and the House of Representatives, and the Koch brothers saw more than an 85% return on their investment, according to CBS News. Democrats not only lost control of the Senate, but lost ground in the GOP-dominated House. For the first time since 2006, the Democrats were left without a majority in either chamber.

Last New Year's Eve, the Democratic Senatorial Campaign Committee (DSCC) disseminated warnings to its constituents about organizations like the Koch brothers’ AFP. “The Koch brothers and their friends thought that they could blanket dead-locked Senate battlegrounds with scathing attacks ads and get away with it. You’re about to prove them dead wrong,” Senate Majority Leader Harry Reid declared in a DSCC fundraising email. This did not happen. Reid was left arguing on the Senate floor that the Koch brothers were trying to "buy our democracy"--but few listened.

For the Kochs, the political expenditures are not only a shrewd investment, they are only a fraction of their fortunes, which has an estimated combined worth of almost $80 billion dollars. To help obscure the source of their PAC funding, the Kochs devised a political contribution funneling system, using proxy organizations which do not disclose their donors, so it is nearly impossible to discern how much they have actually contributed. The nonprofit Sunlight Foundation, a nonpartisan nonprofit working towards governmental transparency and accountability, explains "dark money is a big X-factor. Dark money is a post-Citizens United term for spending by groups that do not disclose donors...like the Koch brothers-founded Americans for Prosperity," according to reports from Politifact.com. To that end, a top Republican involved in the last eight presidential campaigns told Politico.com “the Koch operations are the most important nonparty political players in the U.S. today, and no one else is even close.”

The real danger in all all of this goes beyond the losses suffered by the president, the Democrats who lost their seats, and the countless Americans forced to sit through the onslaught of negative attack ads. It is our democracy at large. If the Koch brothers continue to fund its erosion, America will devolve into a plutocracy--a society ruled by the wealthy. As Robert Greenwald explains in the Huffington Post's “Exposing the Koch Brothers and the Price We All Pay,” these two brothers "have worked in the shadows for decades to bend government to do their bidding or to destroy it, becoming richer while attacking social safety nets in many areas.”

Now that the brothers have stepped into the spotlight, the country may understand what their shadow government and dark money have really cost us, something far more staggering than our national deficit. The Huffington Post paints a dark picture of the Koch agenda, under which there would be "no Medicare, no Medicaid, no food or water safety protections, no national park system, no public education or student loan programs, no public roads and bridges…. There would be no consumer, homeowner, or worker protections from Wall Street banks, big energy companies, pharmaceutical giants, health insurance companies, fast food companies.” All of these hard fought gains will wind up on the chopping block, essentially auctioned off to the highest bidder. Which these days means the Koch brothers.

Here's a taste of what we can expect. Immediately following the November election sweep, the Senate took up a controversial measure to approve the Keystone XL project--a Canada to Texas oil pipeline. The measured failed by a single vote in the Senate--with 59 votes, not enough to break a filibuster. But the pipeline's advocates intend to take it up again next year when the Republicans take control of that chamber. Although the Kochs denied any involvement in the project, others confirmed they actually stood to gain a great deal from it. As the Washington Post pointed out, the largest American or foreign holder of Canadian tar sands isn’t Exxon Mobil or Chevron--it’s the Kochs. In fact, “The Koch Industries subsidiary holds leases on 1.1 million acres -- an area nearly the size of Delaware -- in the oil sands region of Alberta, Canada.” The International Forum on Globalization theorized that if the pipeline were to go through, the Kochs could make an additional $100 billion in profits from their production operations alone, doubling their personal net worth and Koch Industries yearly haul. Further, with the GOP dominated House and Senate, the Kochs’ Climate Denial Machine is in full swing as well in order to quell or scrap altogether regulations on their oil refineries, oil byproducts and pipelines. Marcy Wheeler suggested in Salon that “the GOP victory will be a predictable disaster for efforts to rein in America’s consumption of fossil fuels and with it efforts to limit the extent of climate change.”

As this video depicts, the Koch-topus’ tentacles have encircled the globe to squeeze out ever more oil.

The Future of Kochtopia and the 2016 Election

If this past midterm election is any indication, the Koch brothers will be a driving force in 2016’s presidential election. Thinkprogress developed the following graph comparing the Kochs-related political contributions for the 2012 election:

In short, in 2012 the Kochs nearly outspent the Romney campaign, and far exceeded the spending of all the presidential incumbents in 2000. Their efforts were unsuccessful because their primary task--to replace Obama--failed, and the Democrats retained the Senate. The brothers’ organizations have taken the defeat in stride, assessing where they went wrong in the last outing. According to Politico.com, “The Koch operation undertook a forensic analysis of what went wrong designed partly to prove to donors that it could be trusted with their political donations going forward.” There were two major points hit: “We were outmanned” by the Democrats who “had 770 field staff on the ground” in Florida alone. The memo noted additionally that AFP and “other network partners” had approximately 300 staff nationwide.

So in preparation for the next election cycle, the Koch brothers' organizations ramped up their presence in key states and counties. The Kochs believed they were defeated by Obama because “the Left had a superior messaging strategy and implementation that effectively identified their demographic targets, determined which issues resonated best with which groups, and delivered specific messages over TV, radio and online ads for those audiences.” In response, their organizations placed over 44,000 ads in the midterm elections alone, which the Pew Research Center dismissively called the “meh midterms.” They were, of course, not "meh" in any sense to the Kochs.

UPDATE: According to The New York Times, the Koch Brothers pledge to “spend close to $900 million on the 2016 campaign, an unparalleled effort by coordinated outside groups to shape a presidential election that is already on track to be the most expensive in history.” In fact, the Kochs will spend more than double what they did in 2012. Their projected budget was revealed at the Koch’s annual winter donor retreat, and would “allow their political organization to operate at the same financial scale as the Democratic and Republican Parties.”

I'm left wondering what's in store in 2016, with a much bigger showing from the Kochs. I'm unprepared forwhat a president in their pocket could do to what's left of our democracy. Senator Elizabeth Warren recently pointed out that 32 Americans--yes, 32--contributed more money to politican campaigns in 2012 than the rest of us 3.2 million contributors combined. I can’t imagine my own $50 is going to get me a meeting with a senator, or even a senate aide. considering their pledge to spend 18 million times more than me. But hey, it's level playing field, right?