Britain Just Announced How It Will Respond to Russia's Nerve Agent Attack, and Donald Trump Could Learn a Thing Or Two

Theresa May is not messing around. 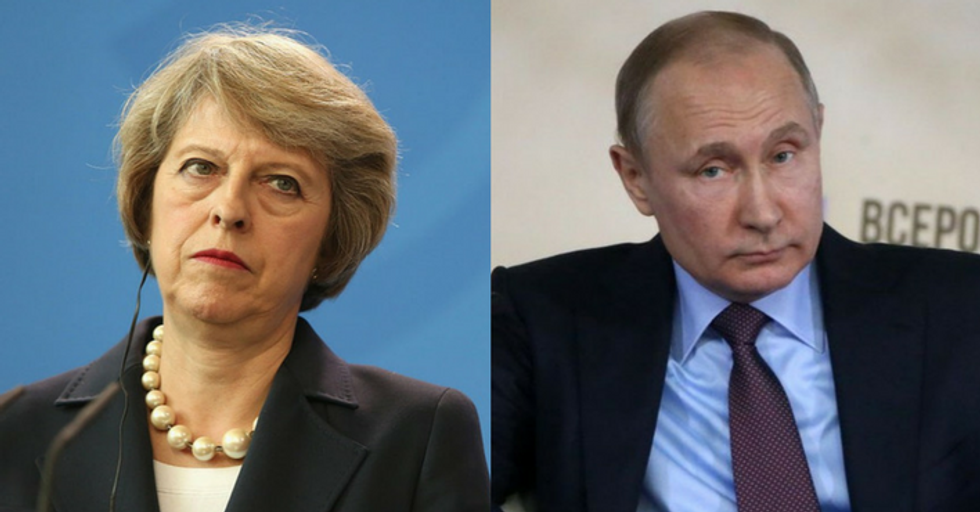 The United Kingdom, under the guidance of Prime Minister Theresa May, prepares to expel 23 Russian diplomats after the attempted murder of Sergei Skripal and his daughter, Yulia.

Skripal, a former Russian spy, and his adult daughter were found March 4. It is believed they were poisoned as part of an assassination attempt.

The former Russian agent and his daughter were found slumped on a bench in the center of the British city of Salisbury, setting off concerns over national security. Salisbury, described as a sleepy medieval city of 45,000 people, is hardly expected to be the scene of international espionage.

May also told parliament the UK will consider new laws to combat spying and look at sanctions as part of a sweeping response to the apparent nerve agent attack in Salisbury.

The UK gave Russia a deadline of midnight on March 13 to answer questions about the attack. The use of military-grade nerve agent novichok raised considerable concerns in London.

However, rather than respond, May said Russia treated their request with “sarcasm, contempt and defiance” and offered no credible explanation for the presence of novichok.

Their response has demonstrated complete disdain for the gravity of these events. There is no alternative conclusion other than the Russian state was responsible for the attempted murder of Mr Skripal and his daughter.”

The attack, according to May, is an “unlawful use of force by the Russian state against the United Kingdom”.

Now 23 Russian diplomats identified as involved in intelligence have just a week to leave the UK. The UK government will also look into new laws to stop suspected intelligence operatives at the border, examine new Russian sanctions and more checks on passengers and cargo on private jets.

The UK will utilize “a range of tools from across the full breadth of our national security apparatus in order to counter the threats of hostile state activity,” according to Prime Minister May.

We will not tolerate the threat to life of British people and others on British soil from the Russian government. Nor will we tolerate such a flagrant breach of Russia’s international obligations.”

We will freeze Russian state assets wherever we have evidence that they may be used to threaten the life or property of UK nationals or residents.

And, led by the National Crime Agency, we will continue to bring all the capabilities of UK law enforcement to bear against serious criminals and corrupt elites. There is no place for these people – or their money – in our country.”

The UK government will develop proposals for new legislative powers to “harden our defences against all forms of hostile state activity”.

Russian ambassador to Britain, Alexander Yakovenko, told Sky News “I said everything what is done today by the British government is absolutely unacceptable and we consider this provocation.”

As yet, no direct response from Russian President Vladimir Putin has been released.

After Moscow’s “sarcasm, contempt and defiance,” it is clear that Russia is culpable for this reckless act against… https://t.co/cOpQdCVe8c
— Kim Darroch (@Kim Darroch) 1521037340.0

The significance of May's speech is her unequivocal attribution of the crime: "the Russian State was culpable for t… https://t.co/ArGC3CELD6
— Michael Carpenter (@Michael Carpenter) 1521035373.0