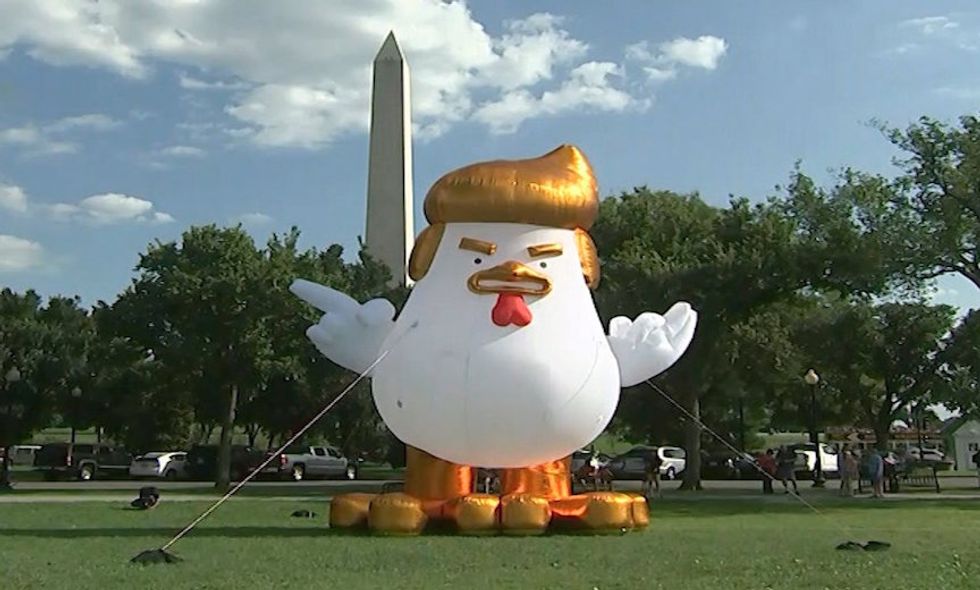 A giant inflatable chicken bearing President Donald Trump's signature hairstyle appeared near the White House yesterday. Aerial photos of the display show the 30-foot tall fowl, known as “Trump Chicken” or “Chicken Don,” situated on the plot of land south of the White House called the Ellipse, between the president's residence and the Washington Monument.

News anchors could not hide their surprise when the chicken first surfaced yesterday afternoon.

“What, what is that?” Fox News host Shepard Smith asked his colleague Josh Lederman.

“Shep, it appears to be a very large chicken display,” Lederman said.

Documentary filmmaker Taran Singh Brar says he installed the balloon to call attention to the president's "weak and ineffective" leadership. Brar obtained all the necessary permits for the installation from the National Parks Service and the Secret Service.

“The tallest thing they usually allow on the Ellipse is the national Christmas tree,” he told reporters. “They gave me a waiver for the 30-foot Chicken Don.”

Brar further accused the president of "playing chicken with North Korea" following his warning that there will be “fire” and “fury” if North Korea keeps threatening the United States. Trump issued his warning after a new U.S. intelligence assessment concluded that North Korea has built a nuclear warhead small enough to fit on top of a ballistic missile.

The "Trump chicken" balloon has appeared in Washington before, most recently before a protest in April to pressure Trump into releasing his tax returns. It even has its own Twitter account.

President Trump has not commented on the installation and is at his Trump National Golf Club in Bedminster, New Jersey as part of a planned 17-day vacation while the West Wing's heating and cooling system undergo a renovation.