There's a New Outbreak of Ebola In the Congo, and the UN Is Trying to Contain It 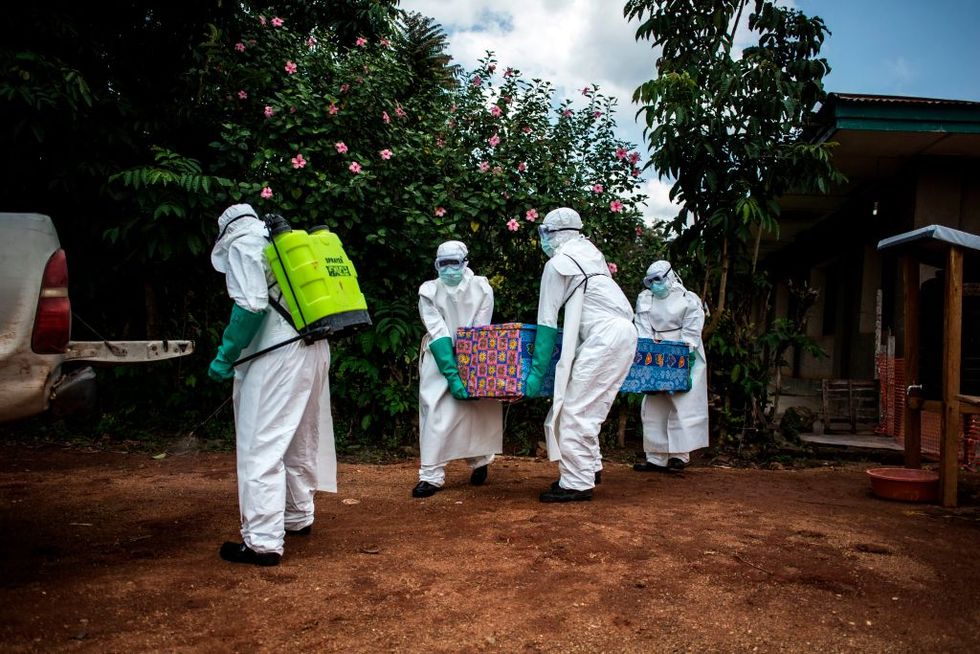 Health workers carry out the body of a patient with unconfirmed Ebola virus on August 22, 2018 in Mangina, near Beni, in the North Kivu province. - Sixty-one people have died in the latest outbreak of Ebola in the Democratic Republic of Congo (DRC), the authorities said, adding that four novel drugs had been added to the roster of treatments. The outbreak began on August 1 in Mangina, the epicentre of the outbreak in the North Kivu province, and cases have been reported in neighbouring Ituri province. It is the 10th outbreak to strike the DRC since 1976, when Ebola was first identified and named after a river in the north of the country. (Photo by John WESSELS / AFP)

The Ebolavirus conjures up gruesome images of infected individuals with hemorrhages erupting all over the body. When the virus was first discovered during an outbreak in 1976 in Zaire (now the Democratic Republic of Congo), the extreme lethality of the virus assisted physicians in containing the spread of the disease. The symptoms would present early enough that emergency responders could easily separate and quarantine the infected from the healthy.

More recent Ebolavirus outbreaks, however, such as the Western African outbreak between 2014 and 2016, have been more difficult to contain because the disease did not present indications of infection as early in exposed individuals, where the predicted incubation time could be doubled from 1-21 days to 1-42 days post-exposure. And new findings indicated the persistence of the Ebolavirus in the sexual fluids of survivors, which suggested Ebolavirus could be further expanded into a sexually transmitted disease. Thus, infected persons could travel greater distances away from the initial point of contact with the virus and potentially spread the virus over a wider area.

The recent outbreak in the Democratic Republic of Congo (or DRC) is further complicated by the insecurity of the region where the Ebolavirus has re-surged and the inability of the United Nations Peacekeepers to guarantee the safety of the doctors going into the field.

Two weeks prior to the current outbreak in North Kivu, an epidemic of Ebolavirus in the North Bikoro region was declared contained. A genetic comparison of virus isolates from the two different outbreaks confirmed that the incidents are not linked, but that the viruses are from the same species of Ebolavirus Zaire. The North Bikoro region of the DRC is considerably safer and more stable, which afforded the responding medical personnel greater flexibility with their movements, research investigations, and treatment of affected people.

Indeed, during the North Bikoro Ebola outbreak, the doctors were able to test five new Ebolavirus therapeutics as well as an experimental Ebolavirus vaccine. The vaccine produced by Merck, known as rVSV-ZEBOV, was used for implementation of a “ring vaccination” strategy. This approach involves vaccinating all uninfected individuals associated with a confirmed case of the disease. The new drugs that were evaluated while tackling the Bikoro epidemic included: GS5734, mAb114, and ZMapp. ZMapp had previously been used to treat two missionary workers that fell sick with Ebola during the 2014 outbreak in Liberia. GS5734 has shown promise at eliminating residual Ebolavirus in the semen of people who survived infection with the virus. And the experimental monoclonal antibody drug, mAb114, was made available to the DRC even though it has only made it to Phase I clinical trials.

When Ebola was asserted to be contained in North Bikoro, it had claimed the lives of 33 people out of 54 reported cases. Some of the lives saved during the containment effort could be attributed to the usage of the currently unlicensed Ebola treatments and experimental vaccine.

The current North Kivu outbreak will not afford medical personnel the opportunity to investigate the utility of those potentially life-saving therapeutics. This is primarily due to the violent instability of the region, which has been described as a “conflict zone” for an extended period of time with no sign of improvement in the near future. Containment strategies will most probably entail bringing doctors into outbreak areas for brief durations to administer to the sick and then be evacuated to a secure base of operations shortly thereafter.

Therefore, there would be little to no time available for clinicians to perform the necessary interviews to trace contacts, so as to understand the path of infection and the level of efficacy of the treatments and vaccinations. Moreover, the advisory committee to the World Health Organization (WHO) that consults on these outbreaks has already “recommended that there be no research until outbreak containment was underway—and well underway.”

Unfortunately, the North Kivu Ebola crisis has exceeded the death from the North Bikoro outbreak with 43 deaths out of 73 confirmed cases. The number of cases and deaths is only likely to increase with time and without a substantive effort on the part of the international medical community.

The current North Kivu Ebola epidemic is seeing the virus spread across multiple cities within the region, cities with populations in the hundreds of thousands. It is both the DRC’s most violent and populated area. The United Nations (UN) has developed a scoring system, from 1 to 5, for such security situations for evaluating when to allow personnel to be put in harm's way. A level 5 region would necessitate the UN to evacuate. The North Kivu region is one step below that at a level 4. Any emergency responders dispatched by the WHO to assist in the Ebola containment effort would be required to have armed escorts with them at all times.

A veteran doctor, who was previously involved in an endeavor to contain a Marburg virus outbreak in a region of the DRC similar to the current one, suggested that there are similarities between the two situations in having to contend with armed groups creating volatility and insecurity. He feels that the current North Kivu Ebola epidemic is “a little bit of uncharted waters” with an area much larger than the earlier Marburg incident with a complicated refugee issue.

To date, the WHO’s “rapid assessment group” has permitted only one of its team members to deploy to the North Kivu region of the DRC. Only a limited number of additional personnel are likely to be included in the containment effort going forward because of the difficulty of protecting the responders.

Cumulatively, the containment of the North Kivu Ebola outbreak will be a milestone effort given the multiple issues hampering the WHO intervention. The stymying factors include the limited number of medical personnel allowed to be dispatched, the precarious security situation that the doctors and peacekeepers will be operating under, and the difficulty in tracking infected persons with the increased numbers of refugees fleeing the violence.

Furthermore, the prior epidemic spanning 2014 to 2016 showed that recent strains of the Ebolavirus take longer to incubate post-infection (double the normal incubation period of 21 days), making the isolation of infected individuals that much more difficult. Additionally, there are indications that a reservoir of the virus can persist in the sexual fluids of infected individuals for even longer than 42 days. The deputy director of the WHO’s emergency preparedness and response group fears that the disease could spread to neighboring Rwanda and Uganda and that the scenario is one that “keeps me up at night.”