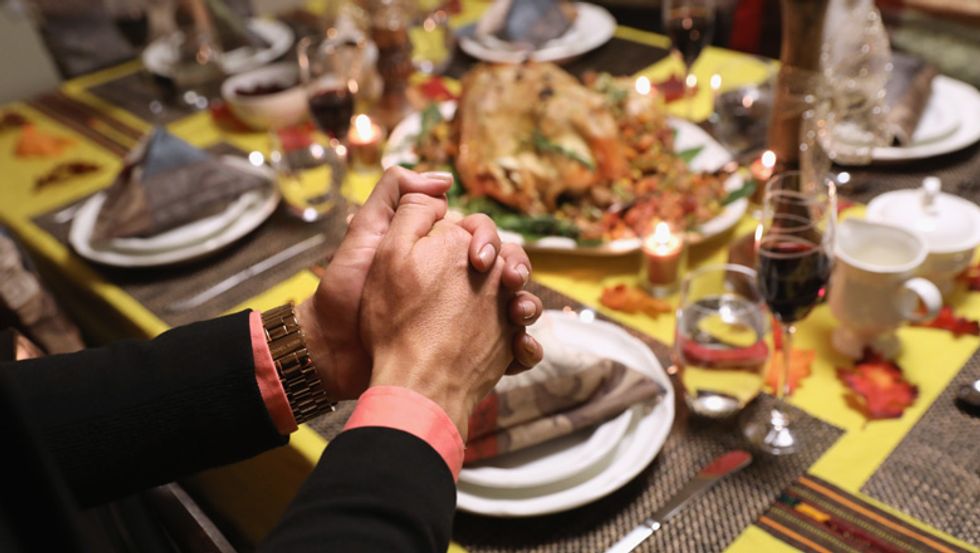 Most modern holidays are derived from ancient holidays celebrated by pagans before the advent of Christianity. Does Thanksgiving have pagan roots, too?

Thanksgiving is not directly correlated with pagan holidays like the recently passed Halloween, or even the upcoming Christmas. Samhain (pronounced SAH-win) is an ancient Gaelic festival that inspired the modern Halloween. Samhain marks the end of the harvest season and the beginning of winter. It begins at sunset on October and goes until sunset on November 1. Because of this and its related feasts, it is sometimes described as the Celtic New Year. The calendar of the Celtic League begins and ends on Samhain. Christmas, too, is a combination of many ancient festivals, all focused on the winter solstice and the "rebirth of the sun."

However, ancient pagans did have thanksgivings and they generally fell around this time of the year. Ancient Greeks held a 3-day long festival each autumn called Thesmosphoria, which honored Demeter, the goddess of grains. On the first day of Thesmosphoria, married women would build leafy shelters and furnish them with couches made with plants, writes Harvest Festivals. This is very similar to the still-celebrated Jewish harvest festival Sukkot, where Jews build decorative tents, called sukkah. After fasting on the second day of Thesmosphoria, ancient Greeks would hold a massive feast for Demeter in hopes of a good harvest.

According to legend, Chung Ch’ui also gave thanks for another special occasion. China had been conquered by enemy armies who took control of the Chinese homes and food. The Chinese found themselves homeless and with no food. Many staved. In order to free themselves, they decided to attack the invaders. The women baked special moon cakes which were distributed to every family. In each cake was a secret message which contained the time for the attack. When the time came the invaders were surprised and easily defeated. Every year moon cakes are eaten in memory of this victory.

Like western pagan cultures, ancient Chinese worshiped a prime "king of the gods" named Shangti and many lesser gods of other names, writes Ancient History Encyclopedia.

However, there is no direct correlation between these ancient festivals and the modern Thanksgiving in the United States other than the celebration of the harvest season.

The First Thanksgiving in 1621, after a painting by Jean Leon Gerome; screen print, 1932. (GraphicaArtis/Getty Images)

The first Thanksgiving between Wampanoag Native Americans and Puritan colonists occurred in 1621 and is sparsely recorded, but forms the basis for the modern celebration. The 3-day celebration, the same length as Thesmosphoria, occurred in Plymouth, present-day Massachusetts, and was prompted by a good harvest. However, it is unknown if turkey was on the menu. History.com writes:

It was during the Civil War that President Abraham Lincoln proclaimed Thanksgiving date as a federal holiday to be celebrated on the fourth Thursday in November, according to Abraham Lincoln Online. This date is usually the last Thursday of the month five out of seven years. This year, November 30 is a Thursday, too.