Thanksgiving 2017: 5 Facts You Didn't Know About Its History & Origin 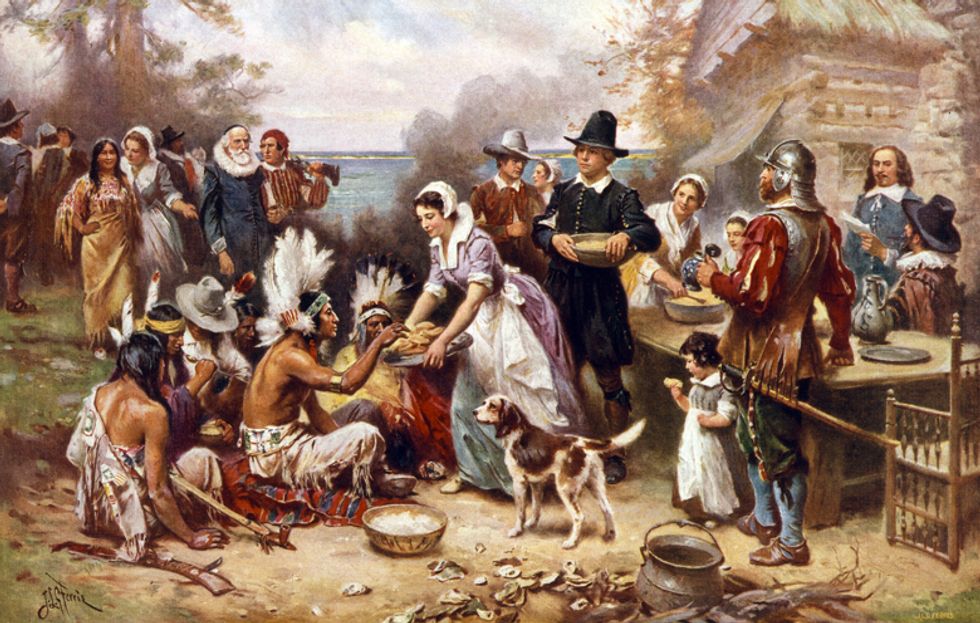 The First Thanksgiving in 1621, after a painting by Jean Leon Gerome; screen print, 1932. (GraphicaArtis/Getty Images)

Happy Thanksgiving! Thanksgivings have been going on a long time, and many more occurred in America before 1621. The first Thanksgiving between Wampanoag Native Americans and Puritan colonists occurred in 1621 and is sparsely recorded, but forms the basis for the modern celebration. The 3-day celebration occurred in Plymouth, present-day Massachusetts, and was prompted by a good harvest. However, even before this date, other similar celebrations occurred both in what would become the United States, and the ancient world, too.

Before 1621, other European settlers in the Americas celebrated similar harvest settlers, including the French and Spanish. For the French, the celebration took place in Florida between Huguenots and local Timucuans, who lived in Northeast and North Central Florida and southeast Georgia before their extinction by English colonists and native allies in the 19th century. The New York Times writes about this tropical Thanksgiving:

Landing in balmy Florida in June of 1564, at what a French explorer had earlier named the River of May (now the St. Johns River near Jacksonville), the French émigrés promptly held a service of “thanksgiving"... In short order, these French pilgrims built houses, a mill and bakery, and apparently even managed to press some grapes into a few casks of wine. At first, relationships with the local Timucuans were friendly, and some of the French settlers took native wives and soon acquired the habit of smoking a certain local “herb.” Food, wine, women — and tobacco by the sea, no less. A veritable Gallic paradise.

Other than this, there were many more versions of what would become Thanksgiving. Learn about its history and origin here:

Thanksgiving is not directly correlated with pagan holidays like the recently passed Halloween, or even the upcoming Christmas. Samhain (pronounced SAH-win) is an ancient Gaelic festival that inspired the modern Halloween. Samhain marks the end of the harvest season and the beginning of winter. It begins at sunset on October and goes until sunset on November 1. Because of this and its related feasts, it is sometimes described as the Celtic New Year. The calendar of the Celtic League begins and ends on Samhain. Christmas, too, is a combination of many ancient festivals, all focused on the winter solstice and the "rebirth of the sun."

However, ancient pagans did have thanksgivings and they generally fell around this time of the year. Ancient Greeks held a 3-day long festival each autumn called Thesmosphoria, which honored Demeter, the goddess of grains. On the first day of Thesmosphoria, married women would build leafy shelters and furnish them with couches made with plants, writes Harvest Festivals. This is very similar to the still-celebrated Jewish harvest festival Sukkot, where Jews build decorative tents, called sukkah. After fasting on the second day of Thesmosphoria, ancient Greeks would hold a massive feast for Demeter in hopes of a good harvest.

According to legend, Chung Ch’ui also gave thanks for another special occasion. China had been conquered by enemy armies who took control of the Chinese homes and food. The Chinese found themselves homeless and with no food. Many staved. In order to free themselves, they decided to attack the invaders. The women baked special moon cakes which were distributed to every family. In each cake was a secret message which contained the time for the attack. When the time came the invaders were surprised and easily defeated. Every year moon cakes are eaten in memory of this victory.

Like western pagan cultures, ancient Chinese worshiped a prime "king of the gods" named Shangti and many lesser gods of other names, writes Ancient History Encyclopedia.

However, there is no direct correlation between these ancient festivals and the modern Thanksgiving in the United States other than the celebration of the harvest season.

2. The Spanish Had a Thanksgiving in Florida in 1598

On September 8, [1598], the Nativity of Mary, they came ashore with great fanfare, to the astonishment of the natives. A Mass of Thanksgiving was held, after which a communal feast was celebrated with the local Seloy tribe. It was the first communal thanksgiving celebration in the first permanently settled European colony on American soil.

Seloy was a nearby Timucuan village of Saint Augustine.

The Timucuans would nearly be wiped out from the Eurasian diseases the Spanish and French settlers brought. By the end of the 16th century, their population was estimated to have dropped from 200,000 to 50,000. By 1700, barely a thousand remained. As stated above, the English colonists and native allies brought their final extinction in the 19th century.

3. The English Held a Thanksgiving in Jamestown in 1607

Circa 1615, The village of Jamestown, situated in the James River, Virginia - the first permanent English settlement in America. A painting by National Park Service artist Sydney King. (MPI/Getty Images)

Nearly a decade and a half before the Purtians broke bread with the Wampanoag, English settlers in settlement of Jamestown, Virginia would begin a Thanksgiving observation that, for a short time, was annual. Thanksgiving services were routine as early as 1607. However, it is the Thanksgiving held in the spring of 1610 that is best remembered. According to the Library of Congress:

Colonists in Jamestown, Virginia held a thanksgiving prayer service after English supply ships arrived with food. The harsh winter of 1609-1610 generated a famine that decimated the settlers. The group was reduced from 490 members to only 60 survivors who were forced to dire measures such as eating their horses.

There are also reports of cannibalism among the colonists.

The first Thanksgiving between Wampanoag Native Americans and Puritan colonists occurred in 1621 and is sparsely recorded, but forms the basis for the modern celebration. The 3-day celebration, the same length as Thesmosphoria, occurred in Plymouth, present-day Massachusetts, and was prompted by a good harvest. However, it is unknown if turkey was on the menu. History.com writes:

5. It Has Become Highly Commercialized

The day after Thanksgiving, also known as "Black Friday", is a holiday where shoppers crowd stores like the Apple Store on New York's Fifth Avenue. (Andrew Lichtenstein/Corbis via Getty Images)

Thanksgiving has become highly commercialized due to its proximity to the major gift-giving holiday, Christmas. In fact, Thanksgiving was briefly moved by President Franklin D. Roosevelt. History.com writes:

In 1939, Franklin D. Roosevelt departed from tradition by declaring November 23, the next to last Thursday that year, as Thanksgiving Day. Considerable controversy surrounded this deviation, and some Americans refused to honor Roosevelt’s declaration. For the next two years, Roosevelt repeated the unpopular proclamation, but on November 26, 1941, he admitted his mistake and signed a bill into law officially making thefourth Thursday in November the national holiday of Thanksgiving Day.

According to Time, "FDR had a Black Friday-friendly explanation: merchants wanted a holiday that was farther from Christmas, allowing more time to shop." This date is usually the last Thursday of the month five out of seven years. This year, November 30 is a Thursday, too.