77 Year-Old Texas Voter Just Explained Why Electing Beto O'Rourke Would Mean So Much to Her, and Now We're Crying 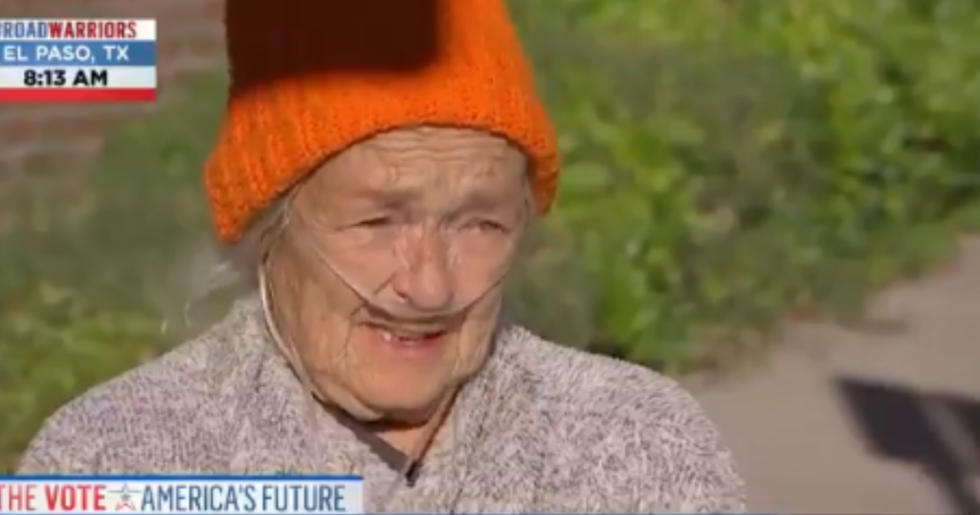 A 77-year-old Texas voter was moved to tears after she ran into Democratic Senate candidate Beto O'Rourke at her polling station Tuesday morning.

The voter, "Pamela," sported a BETO FOR SENATE t-shirt and hauled her oxygen tank to the ballot box in El Paso, Texas to vote for the three-term Congressman hoping to oust incumbent Republican Ted Cruz.

MSNBC's Garrett Haake asked Pamela how it felt to see O'Rourke and his family as she voted.

"You were here when Beto came to cast his vote and you told me this was very emotional for you," Haake said. "Why?"

Pamela, fighting back tears, said she "wasn't expecting" to see O'Rourke and that she thinks he is "pretty important," adding that she and others are "honored" that O'Rourke "is here."

Haake followed up by asking Pamela why she feels O'Rourke is so important.

Pamela's powerful answer is all of us.

"Because he represents everything Donald Trump isn't."

Haake: "Tell me what it means to you to see Beto who's sort of a favorite son around here. We're in his neighboorhood. He's out here representing El Paso, hoping to represent the whole state. What has it meant for you to see what he's been saying on the national stage?"

Pamela: "Well, I give him a lot of credit for standing up and saying what he thinks and for being willing to represent so many people who are like-minded. It means a lot. We're just so proud."

Haake: "What will it feel like if you see him win this race tonight?"

Pamela's emotional response was one of hope.

"Everything. We want him to win. We'll be watching the TV tonight. He'll be someplace in the city. It will just be so much. It will mean that, my gosh, we still have a chance to have a decent country with decent values with decent relationships with people."

Many are reminded of Robert Kennedy's trek through the South during the 1968 presidential race. Kennedy made poverty and racial equality cornerstones of his ill-fated campaign.

Others believe O'Rourke is a decent person and would make Texas proud as its next U.S. Senator.

If you live in Texas, polls are open until 7 P.M. CST.