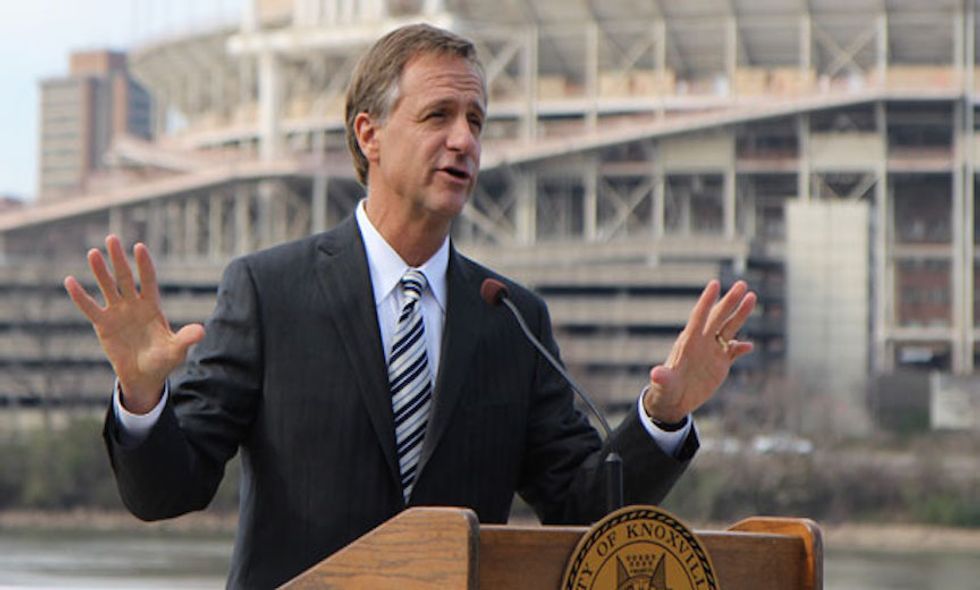 On Wednesday, Tennessee Governor Bill Haslam (R) signed into law HB 1840, a measure that will allow therapists and counselors to legally refuse service to anyone in violation of their “sincerely held principles.”

"Although Senate Bill 1556 has received attention for its perceived focus, my job is to look at the actual substance of the legislation," said Haslam. "The substance of this bill doesn't address a group, issue or belief system. "I believe it is reasonable to allow these professionals to determine if and when an individual would be better served by another counselor better suited to meet his or her needs." Haslam claims he did not sign the bill until lawmakers addressed two of his largest concerns. The law now requires mental health professionals to treat anyone deemed a danger to themselves or others. The bill states that a therapist must provide a referral to their client if they refuse service.

The measure holds significant consequences for Tennessee’s LGBT community. Nearly a quarter of the state’s 6.5 million residents live in rural areas, where access to mental health care is scant. The bill states that a therapist must provide a referral to their client if they refuse service, but it is likely the nearest therapist willing to help an LGBT patient could be hours away. LGBT children and teens have limited access to insurance and transportation and are most at risk. Studies have shown LGBT children and teens are four times more likely than their peers to attempt suicide; the consequences could be deadly if their parents are unwilling to help or if their parents throw them out of their homes when they learn they are LGBT.

Chris Sanders, Executive Director of the Tennessee Equality Project, criticized the legislation in a statement. "After working with allies the entire legislative session, especially the American Counseling Association and many counselors in Tennessee, to defeat the HB 1840, we had hoped for a veto. We know the Governor carefully considered his decision, but the reality we now face is that counselors will be able to discriminate against clients based on

the counselor’s principles. We continue to worry particularly about rural LGBT people who may not have adequate resources for counseling in their communities."

Hedy Weinberg, the Executive Director of the American Civil Liberties Union (ACLU) in Tennessee, expressed similar disappointment. "This measure is rooted in the dangerous misconception that religion can be used as a free pass to discriminate," Weinberg said. "Allowing counselors to treat some potential clients differently from others based on their personal beliefs defies professional standards and could cause significant harm to vulnerable people." The ACLU says the bill’s language allows mental health professionals to “refuse to see clients for almost unlimited reasons. For instance, a counselor could refuse to see a lesbian simply because of her sexual orientation, or to see a couple involved in an interfaith relationship. A counselor who is an atheist could refuse to see a Catholic client—and the list goes on.”

HB 1840 is the only bill of its kind in the nation. The American Counseling Association (ACA) says the legislation trounces upon its code of ethics, which states that mental health professionals cannot deny service based on “personally held values, attitudes, beliefs and behaviors.” In contrast, the Family Action Council of Tennessee (FACT) hailed the new legislation earlier this month, saying that it was important to “protect the right of conscience of a counselor” and to “safeguard religious beliefs and moral convictions.”

The measure is the most recent in a series of anti-LGBT legislation in the South.

Last month, the North Carolina legislature passed a bill that overturned local gay and transgender protections in a special one-day session that cost taxpayers approximately $42,000. Governor Pat McCrory signed the bill into law mere hours after its introduction. The bill was a direct response to a prior nondiscrimination ordinance in the city of Charlotte, which had offered a wide range of protections. Most notably, the Charlotte ordinance allowed citizens to use the restroom that best matches their gender identity. State lawmakers acted ostensibly out of concern that women and children could be victimized by sexual predators posing as transgender to enter women’s restrooms–a fear not grounded in any factual basis, according to critics.

The Mississippi Senate also approved a sweeping anti-LGBT religious freedom measure. Republican lawmakers hold a majority in both chambers; they believe the bill addresses issues created for people of faith by the Supreme Court’s 2015 marriage equality ruling. Mississippi House Bill 1523, or the “Protecting Freedom of Conscience from Government Discrimination Act,” allows individuals, businesses and government employees (including counseling services, foster care and adoption services), nonprofits and other entities to refuse goods and services to LGBT people and anyone who has had extramarital sex on religious grounds.

The bill also defines “male” and “female” as someone’s “immutable biological sex as objectively determined by anatomy and genetics at time of birth,” protecting those who decline treatments, surgeries and counseling related to sex reassignment or gender and identity transitioning. HB 1523 prohibits the government from taking action against

individuals and faith-based institutions who act according to their “religious convictions.”

Tennessee’s measure has already received backlash from a member of the national business community. Mitchell Gold, an LGBT activist and the co-founder and chairman of Mitchell Gold + Bob Williams, a North Carolina-based furniture manufacturer, challenged Sen. Jack Johnson’s raucous defense of the bill in a segment on CNN’s New Day. “Instead of the Senator working hard to protect incompetent counselors, how about protecting these kids that are out there?” he demanded. “There’s over a million and a half gay teens that need the help and support of adults. They need the common decency of adults. They don’t need to be persecuted,” Gold said, emphasizing that mental health professionals “have to have continuing education,” and “live to the Hippocratic Oath – do no harm.”

This backlash could translate into financial consequences for Tennessee. After North Carolina passed its anti-LGBT bill, Bank of America, which has its headquarters in Charlotte, announced it was joining over 80 chief executives, including Twitter and Square CEO Jack Dorsey and Apple CEO Tim Cook, in opposing the legislation. The CEOs voiced their concerns in an open letter to Governor Pat McCrory (R) posted on the Human Rights Campaign website. Bank of America was one of the largest contributors to McCrory’s 2012 gubernatorial campaign. Several state and local government officials have announced travel boycotts to that state, and many companies and artists have refused to do any business or perform there.

In Georgia, where a “religious freedom” bill ultimately was vetoed by Governor Nathan Deal,the uproar over the bill caused telecom company 373K decided to move its headquarters to Nevada. “I’m gay, our CFO is gay, we have people from every walk of life working here,” said co-founder Kelvin Williams in a telephone interview with The New Civil Rights Movement. “I’ve got Muslims, Buddhists, atheists here. We’ve got great Christians working for us. They’ve never thought of not serving anyone—that’s not the message of Christ.” Many prominent actors and directors, including Rob Reiner, Anne Hathaway and Julianne Moore, threatened to take their business elsewhere. The Walt Disney Corporation and its subsidiary, Marvel, echoed this statement, pledging to relocate offices “should any legislation allowing discriminatory practices be signed into state law.”