Tennessee’s House just killed a bill that would have ended same-sex marriage in the state.  That would be good news, but another identical bill is still pending in the Senate.

On September 17, 2014, two Tennessee state lawmakers resolved to take on the Supreme Court. Republicans Rep. Mark Pody and Sen. Mae Beavers each introduced “The Tennessee Natural Marriage Defense Act” in their respective houses of the Tennessee General Assembly. The purpose of the law is to effectively invalidate the Supreme Court’s ruling within Tennessee’s borders. 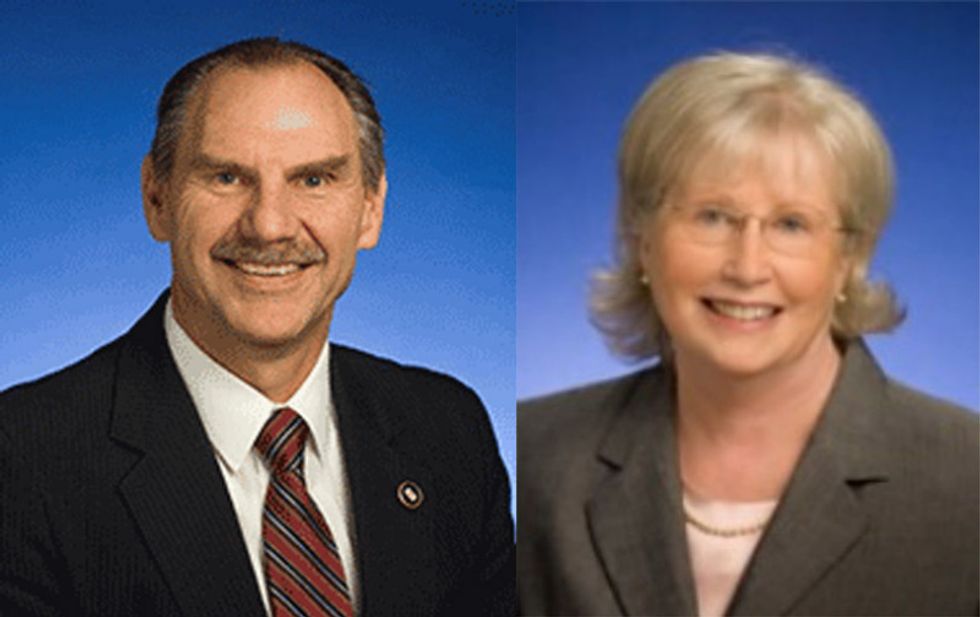 According to the Tennessee General Assembly's website, the bill “requires the state of Tennessee to defend natural marriage as between one man and one woman ... regardless of any court decision to the contrary.” Under the law, Tennessee’s attorney general would be required to “defend any state or local government official from any lawsuit regarding the official's recognition of natural marriage.” The bill also directs local agencies and officials to ignore court judgments ordering them to recognize marriage equality.

Under the law, Tennessee’s attorney general would be required to “defend any state or local government official from any lawsuit regarding the official's recognition of natural marriage.” The bill also directs local agencies and officials to ignore court judgments ordering them to recognize marriage equality.

The bill echoes the state’s now-defunct constitutional amendment defining marriage as a contract between a man and a woman. The amendment, added to Tennessee’s constitution by popular vote in 2006, declared that any alternative definition would be “contrary to the public policy of [Tennessee],” and specifically barred the state from recognizing the marriages of same-sex couples performed in other states. After an unsuccessful attempt by the ACLU of Tennessee to block the state from putting the measure on the ballot, voters approved the amendment with a staggering 81% majority.

Tennessee was one of four states that were parties to Obergefell v. Hodges. The landmark Supreme Court decision, which recognized the right to marriage equality in all fifty states, was a blow to Tennessee’s amendment. After the historic ruling in June, it seemed

that Tennessee would “comply with the [Supreme Court’s] decision and ... ensure that our departments are able to do so as quickly as possible.” Though it was hardly a full-throated show of support, the statement wasn’t defiant either—a big step forward for a state that had just spent an enormous amount of money defending its marriage ban all the way to the Supreme Court.

But another state official was less enthusiastic about the Court’s ruling. On the day the ruling came down, Tennessee Attorney General Herbert H. Slattery III expressed his deep disappointment:

“Today's United States Supreme Court decision not only changes the definition of marriage, but takes from the states and their citizens the longstanding authority to vote and decide what marriage means. To the Tennessee citizen who asks 'Don't we get a chance to vote on this in some way?' the answer from the Supreme Court is a resounding, 'No, you do not.' For the Court to tell all Tennesseans that they have no voice, no right to vote, on these issues is disappointing. The Court, nevertheless, has spoken and we respect its decision. Our office is prepared to work with the Governor and the General Assembly, as needed, to take the necessary steps to implement the decision." 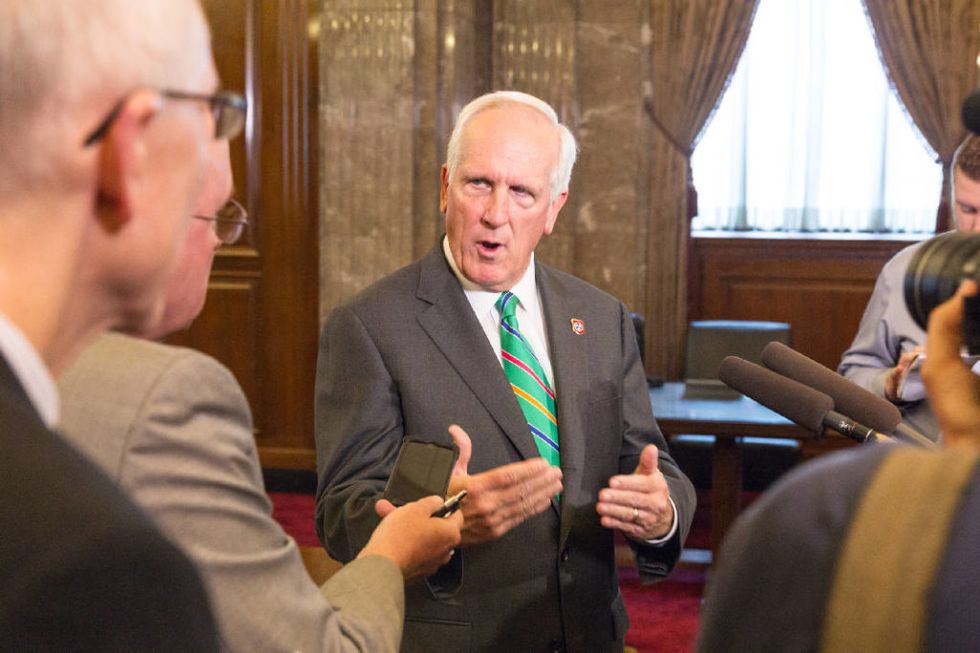 By September, a small movement to resist Obergefell was gaining momentum. A crowd of more than 400 people attended a “Religious Liberty Rally” in Nashville on the day Pody and Beavers introduced their identical bills. Beavers spoke to the crowd, saying, "We're going to tell the attorney general, he will defend marriage in Tennessee as it is written on our constitution.” Her audience cheered in response.

In December, at an event organized to bolster support for the bill, Rep. Pody said, "I believe I'm supposed to

Yet while they were busy warning their supporters of the wickedness of homosexual coupling, Beavers and Pody failed to address the real consequences of their proposal.

The bills consist primarily of a string of quotes from the dissenting Justices in Obergefell, but they also compare the case to three of what are widely considered to be the most regrettable decisions ever to come from United States Supreme Court: Scott v. Sanford, Buck v. Bell, and Korematsu v. United States. Each of the three decisions represents a major setback in civil rights. On page seven, the bill states:

In Scott v. Sanford, the Court held that slaves were not citizens of the United States and did not have the right to petition the court to be released; Buck v. Bell upheld the right of the state to forcibly sterilize persons with disabilities; and in Korematsu v. United States, the Court upheld the President’s decision in World War II to intern Japanese-American families in camps.

Obergefell, on the other hand, it would strip thousands of same-sex couples of their rights under the U.S. Constitution. Traditional conservative opposition to marriage equality and reproductive freedom cannot obscure that distinction.

As a general rule, states cannot simply ignore Supreme Court rulings. If the new bill passed, the law would send Tennessee’s attorney general on a series of expensive fool’s errands in federal court. Because the law would invalidate all marriage licenses issued to same-sex couples in Tennessee since the Obergefell ruling, and allow the state to ignore the rights of same-sex couples whose marriage licenses were issued in other states, each of those people would have a federal cause of action to sue the state under Obergefell. It’s unlikely that the Supreme Court, having just ruled for marriage equality, would rule in Tennessee’s favor were any of those cases to make it that far.

Even ignoring the potentially staggering court costs, the bill would cost the state an estimated $8.5 billion in lost revenue and federal aid. According to a fiscal note issued by the Tennessee General Assembly Fiscal Review Committee, “[t]he provisions of the bill could jeopardize federal funding if it is determined the state is noncompliant with federal law.” $2 billion of federal aid currently funds Tennessee’s Supplemental Nutrition Assistance Program, also known as “SNAP,” and Temporary Assistance for Needy Families. Another $6.5 billion dollars funds TennCare, Tennessee’s Medicaid program.

Pody’s bill died in committee on January 20th, but Beavers’ bill is still pending in the Senate; it is not likely to pass. What is certain, however, is that Tennessee lawmakers are wasting their state’s time and resources, and putting low-income families at risk of losing vital federal benefits—all in a futile attempt to turn back the civil rights clock.

Love won a major victory in June, and Tennessee’s struggle against the tide is not likely to change that.

Days later, Limbaugh made even more headlines when he scoffed at the idea that gay South Bend, Indiana Mayor and 2020 presidential contender Pete Buttigieg would kiss his husband on a debate stage next to "Mr. Man" Donald Trump.

Despite massive outcry against the homophobic remarks, Limbaugh has yet to apologize.

Now, we know why.

Stephen Miller, the white supremacist Trump administration official behind some of President Donald Trump's most insidious anti-immigration policies, was married at the Trump International Hotel in D.C. this past weekend.

While he and his new wife, Vice President Mike Pence's press secretary Katie Waldman, enjoyed a day of blissful matrimony, others called attention to the numerous immigrants and refugees whose lives have been ruined by policies Stephen Miller helped build.

Among them? Miller's own uncle.

Nearly 90 percent of the United States Congress is Christian, and every single President in U.S. history has been Christian, while Christians only make up 65 percent of Americans.

That's not enough representations for the National Association of Christian Lawmakers, a Conservative Christian group dedicated to influencing America's politicians to favor Christianity over constituents.

President Donald Trump and those who work for him routinely tout the United States' low unemployment numbers and economic prosperity as evidence that his term as President so far has been a success.

President Donald Trump took the opportunity to hype his pet project—bollard fencing along the southern border—to a meeting of the National Border Patrol Council.

The NBPC—a union organization not part of the federal agency—is "the exclusive representative of approximately 18,000 Border Patrol Agents and support personnel assigned to the U.S. Border Patrol."