America Has Election Trauma, So Canadians Started an Incredibly Nice Campaign on Twitter 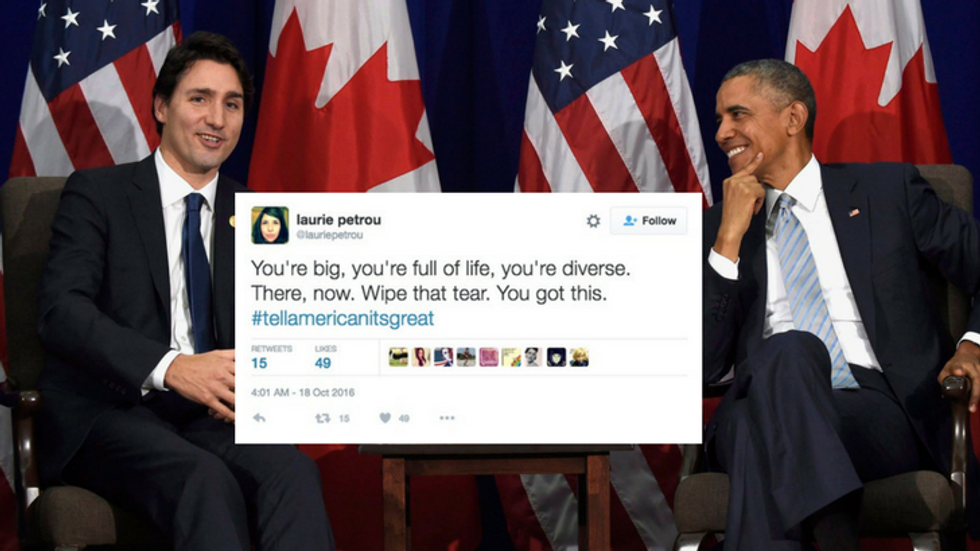 The Garden Collective, a creative agency in Toronto, found a way to cheer up the United States during a particularly tough election cycle: By riffing on Donald Trump's campaign slogan and launching a social media campaign called "Let's Tell America It's Great." The campaign encourages Canadians to send videos of themselves telling Americans why they're already great.

In a blog post titled "A Friend in Need," the agency explained why it launched the campaign: "It’s no secret that America is going through a hard time right now. The election has exposed some pretty scary realities that will likely challenge them for years to come, regardless of who’s elected. They’ve been bombarded with a tremendous amount of negativity and it’s likely that for many of them, the immediate future seems rather bleak... As their closest friends and neighbours, we thought it was important for us to do something to cut through the negativity and help remind them that no matter how bad things might seem, there are a lot of reasons to believe that America is still pretty great."

The campaign took off––a diverse group of individuals uploaded videos of themselves praising the United States for everything from its musical influences to its space program. More than two dozen Canadians gave warm testimonials in the campaign's main video, which was filmed on webcams and smartphones. “Hey, guys," says one man in the video's opening, "we’re just up here in Canada talking about how great you guys are down there, and we thought we’d just send you a little bit of a love note.”

Other Canadians took to Twitter using the hashtag #TellAmericaItsGreat to offer more plaudits and moral support.

Some Canadians praised America for its diverse offerings:

While others highlighted particular accomplishments:

You've virtually eradicated Polio, one of the most virulent diseases ever. Don't let anyone tell you you aren't great #tellamericaitsgreat
— 𒂗𒆠 (@𒂗𒆠) 1476383663.0

One woman was considerably more adamant:

Americans, inspired by the kind gesture, joined the campaign to express their gratitude for their northern neighbor.

You Canadians are just so freaking NICE. :) Thank you! It's been a little rough down here. #TellAmericaItsGreat
— Paul Zelizer (@Paul Zelizer) 1476538986.0

The #tellamericanitsgreat tag is a bunch of happy, supportive, Canadians giving positive comments about the US. This is real unity, folks
— commander amander (@commander amander) 1476788865.0

Shari Walczak, a Garden Collective founder, believes the campaign was a long time coming: “Every morning we’d come together at work and there would inevitably be a discussion about another negative piece of news about the election,” she said. “We look at it through a Canadian lens, but all of us have friends, family, and colleagues who live in America. We realized they’re immersed in it day in and day out and how awful that must feel.”

She also pointed out that the close relationship between Canada and the United States––a relationship which has entwined everything from societies to law enforcement and defense operations––is another reason why Canadians are watching the election closely. “Everything is so intertwined," she said, "we can’t help but realize that we’ll also be affected by the outcome of this election."