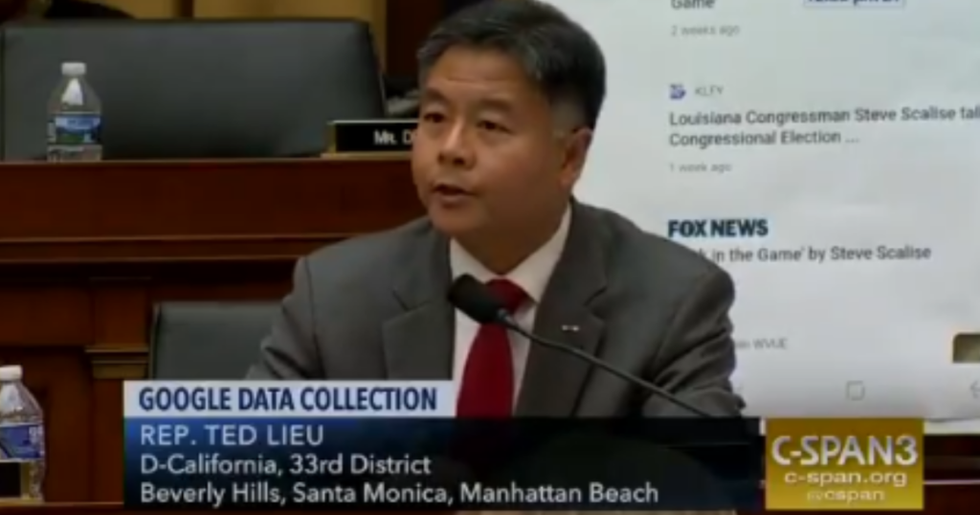 The House Judiciary Committee questioned Pichai over whether Google manipulated search engine results in order to favor certain individuals over others.

"You don't have a group of people at Google sitting there thinking, 'Hey, we like Steve Scalise, so we're going to generate positive articles on these search results,'" Lieu asked Pichai. "That's not what's happening, right?"

Pichai replied: "No, we don't deal with individual queries and with any viewpoint."

After Googling House Majority Whip Steve Scalise (R-LA), Lieu read off a series of positive headlines about Scalise, who was injured in a shooting at a Congressional baseball practice game in 2017.

Lieu then entered King's name into the search engine. The results were negative articles about bigoted comments made by the Iowa Congressman.

"I'm going to change one word," Lieu said. "So I'm going to search for 'Congressman Steve King,' I'm going to hit the 'News' tab. First article that pops up is from ABC News. It says 'Steve King's racist immigration talk prompts calls for congressional censure.' That's a negative article. But you don't have a group of people at Google sitting there thinking and trying to modify search results - every time Steve King comes up, a negative article appears. That's not what's happening, right?"

Pichai again said no, Google does not tamper with results.

Looking at King, Lieu had some advice for King - stop being saying racist things.

Watch the exchange below:

@atrupar @tedlieu The only thing missing is a shot of Steve King while this was happening.
— blair lipscomb (@blair lipscomb) 1544561533.0

Republicans' lack of basic technical prowess is stunning, to say the least.

In 2018, lawmakers should understand how the internet works.

Back in August, President Donald Trump took to Twitter to whine that when he Googled “Trump news” – only the “Fake New [sic] Media” appeared in the results. The president suggested Google was “rigging” the internet and “shutting out” right-leaning news sites.

CNN, The Washington Post, and NBC were the three most-frequent results for a “Trump news” Google search – because they are news sites.