Tech Giants Pledge To Fight Back Against Trump's DACA Decision

Microsoft and Apple have threatened legal action against the Trump administration for its plans to rescind DACA, effectively placing 800,000 lives at risk. 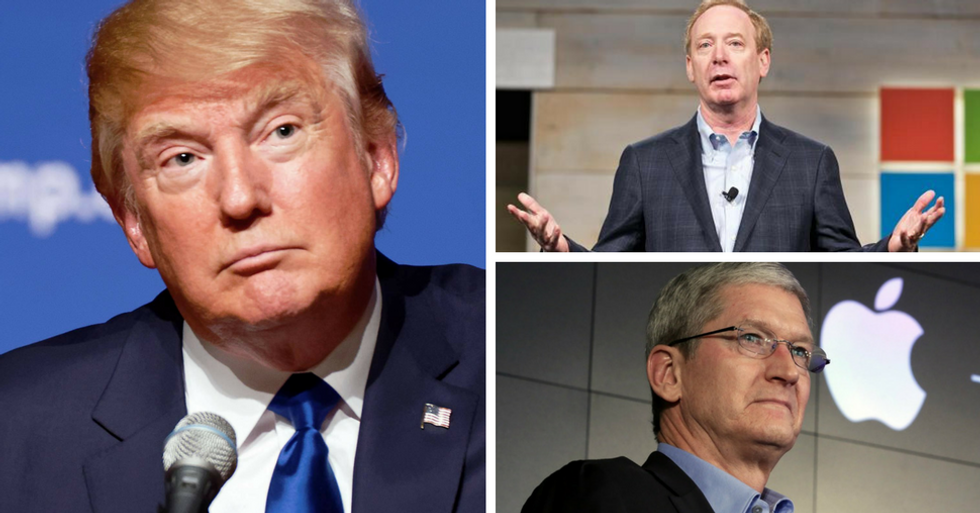 Microsoft and Apple have pledged to fight back against President Donald Trump's decision to rescind Deferred Action for Childhood Arrivals (DACA), which places more than 800,000 undocumented people who were brought to the United States as children at risk of deportation.

"If Congress fails to act, our company will exercise its legal rights properly to help protect our employees," Microsoft president and chief legal officer Brad Smith wrote in a blog post yesterday, shortly after US Attorney General Jeff Sessions said the Trump administration would dismantle the program.

"If the government seeks to deport any one of them, we will provide and pay for their legal counsel... We say this even though Microsoft, like many other companies, cares greatly about modernizing the tax system and making it fairer and more competitive. But we need to put the humanitarian needs of these 800,000 people on the legislative calendar before a tax bill."

Smith said Microsoft will also explore whether it can intervene in any such case: 30 "DREAMers," as those individuals who've benefited from the program are known, currently work at the tech company.

Microsoft CEO Satya Nadella made a similar pledge in a post on LinkedIn:

As I shared at the White House in June, I am a product of two uniquely American attributes: the ingenuity of American technology reaching me where I was growing up, fueling my dreams, and the enlightened immigration policy that allowed me to pursue my dreams... As a CEO, I see each day the direct contributions that talented employees from around the world bring to our company, our customers and to the broader economy. We care deeply about the DREAMers who work at Microsoft and fully support them. We will always stand for diversity and economic opportunity for everyone. It is core to who we are at Microsoft and I believe it is core to what America is.

Apple CEO Tim Cook also condemned the president's action. In a company-wide email issued yesterday, Cook said he is "deeply dismayed that 800,000 Americans —including more than 250 of our Apple coworkers —may soon find themselves cast out of the only country they've ever called home."

Cook pledged that Apple will offer any employees affected by the change the “support they need, including the advice of immigration experts." He noted that he had spoken with several of the company's DREAMers over the weekend and that some of them have no memory of their lives before they came to the United States.

The typically reserved Cook has often avoided direct confrontation with the Trump administration, although he has sparred with the president and government officials more than once over transgender rights and the removal of climate change from the government lexicon.

#Dreamers contribute to our companies and our communities just as much as you and I. Apple will fight for them to be treated as equals.
— Tim Cook (@Tim Cook) 1504636403.0

He also tweeted his support for DACA earlier this week.