After Trump Claimed Not to Call Meghan Markle 'Nasty', Jake Tapper Just Trolled Him With the Perfect George Orwell Quote

That was supposed to be fiction. 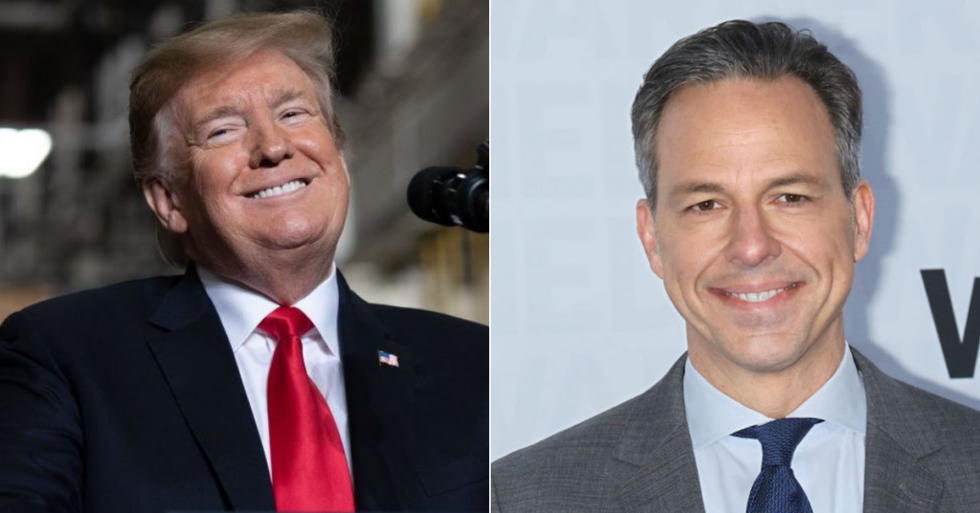 In advance of his state visit to the United Kingdom, President Donald Trump sat down in the Oval Office with British tabloid The Sun. During the course of the recorded interview the President referred to the Duchess of Sussex, Meghan Markle, as "nasty"—which Trump promptly denied as "fake news."

Which inspired CNN's Jake Tapper to invoke the prescient words of George Orwell from his dystopian novel 1984.

"The party told you to reject the evidence of your eyes and ears. It was their final, most essential command." ~ Orwell, 1984

Despite naming no names, most people understood the reference. Except the intended target.

As others retweeted Tapper's message, President Trump actually liked the dig against the "alternative facts" of his administration. Brian Stelter, CNN's chief media correspondent noted Trump's like of the Orwell quote.

"Huh. [President Donald Trump] 'faved' a tweet for the first time in a while... and it's a George Orwell quote, critiquing Trump for denying calling Markle 'nasty' even though he said it on tape."

People—aside from the President who seemed to fail to understand the meaning of Orwell's novel—found Tapper's reference very appropriate.

Some channeled their own President Trump for a response.

Some implored media to fact check Trump and refuse to publish his lies.

But some found value in knowing what was being said since some media outlets that favor the President would share those quotes and claims with their viewers.

After being accused of making up the quote about Markle, The Sunproduced evidence of the President saying:

"I didn’t know she was nasty."

In support of the President, a Twitter account called the Trump War Room shared the audio recording with a caption saying the words said in the attached audio clip were "fake news." People quickly made note of the "self-own," including Jake Tapper.

Some tried to reword the President's comments, but people were not letting him off the hook so easily.

@jaketapper Hearing the entire conversation don’t you think it seems like the reporter was goading him into saying… https://t.co/js0HWG6Pwz
— Eugene Gu, MD (@Eugene Gu, MD) 1559414035.0

@eugenegu @jaketapper Sorry, don’t agree. Trump could have said...”I didn’t know she said that” and move on. Instead he calls her Nasty.
— Nancy Santanello (@Nancy Santanello) 1559414402.0

@nancysantanello @eugenegu @jaketapper Exactly! There are a million ways he could have phrased it. It's no coincide… https://t.co/wepiv0wSWQ
— Troy Warr (@Troy Warr) 1559416327.0