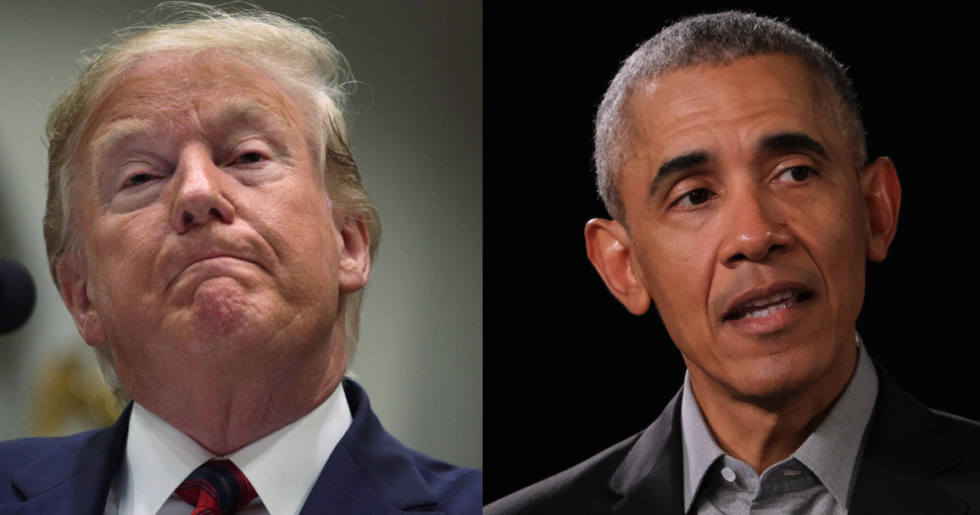 President Donald Trump is receiving backlash for a sudden announcement of a cancelled meeting with leaders of the Taliban, a violent and fundamentalist political movement, at Camp David during the 18th anniversary of the September 11 attacks.

The peace talks were aimed at ending the years long conflict in Afghanistan, but were called off after the Taliban—which sheltered Osama Bin Laden for years and championed political violence against the United States—claimed credit for an attack in Kabul that left 12 people, including an American soldier, dead.

Americans aren't blaming Donald Trump for cancelling the meeting, but they are concerned that his administration pursued the meeting at the time and place that it did.

Obama captured the nation in a national address in April of 2011 when he announced to the world that Osama bin Laden, the orchestrator of the September 11 attacks, had been killed—ten years after 9/11. Trump's invitation of the Taliban to Camp David, where officials gathered in the aftermath of the attacks, was considered by many a slap in the face.

Dowd has been a critic of Trump for some time, lambasting his approach to North Korea and his incessant use of Twitter.

Many agreed with Dowd's stance.

@matthewjdowd @DevinCow R’s were more upset about Obama’s so called spiking of the football vs actual Taliban being invited to the USA.
— Yankees Universe (@Yankees Universe) 1567970565.0

@matthewjdowd @DevinCow Except the Taliban say it never happened. What is shocking is that it's easier to believe t… https://t.co/QOgAj4lk6X
— Daniel Smith (@Daniel Smith) 1567971301.0

Dowd wasn't the only one who recognized the hypocrisy.

Someone please remind me what year it was that Obama invited the Taliban onto US soil for an anniversary visit. https://t.co/XUTaybrT9S
— Brian Tyler Cohen (@Brian Tyler Cohen) 1567974494.0

While Republican backlash for Trump is a relatively rare phenomenon, the pursuit of bringing the Taliban onto American soil during the anniversary of September 11 was taking a step too far.

"[M]y blood is boiling over this...And I’m left wondering: what was the plan here?...what were they thinking? I really want to know what the plan was before it went haywire.””

One senior Taliban leader said a meeting in Washington was never an option:

“If Trump and his administration think they would solve the confrontation between the government and the Taliban somewhere in Washington in a meeting, that’s not possible because we do not recognize the stooge government.”

@RockyMntnMike Something is seriously wrong when we question the truthfulness of the President of the United States… https://t.co/QvVhsONwBc
— Elle.M.E 🆘 (@Elle.M.E 🆘) 1568008297.0