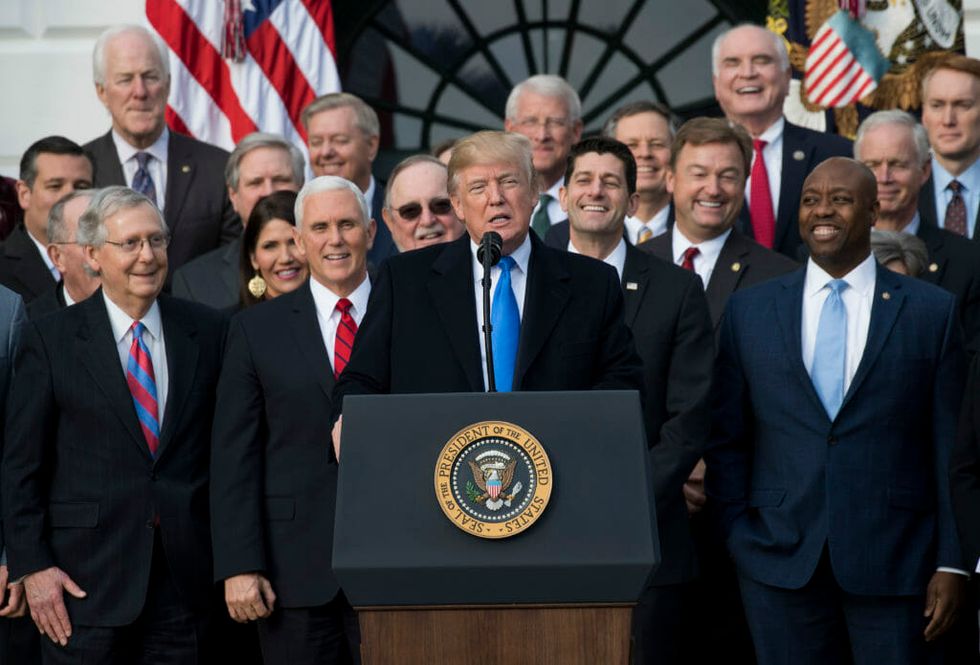 The Tax Cuts and Jobs Act, President Donald Trump's controversial tax cut law he signed in December, was touted by Republicans as their path to victory in the 2018 midterm elections, seems to be falling short of their expectations.

Recent polling suggests that Americans aren't thrilled with the law, which overwhelmingly benefits the rich and large corporations and contains a provision repealing the Affordable Care Act's individual mandate—which economists warn will cause health insurance premiums to skyrocket.

Though controversial, the individual mandate helped slow the increase in premiums, because healthy people buying insurance offsets insurer's costs of treating the sick (of course, this is exactly how insurance is supposed to work, be it health insurance or car insurance, for example).

In a HuffPost/YouGov survey, only 34 percent of Americans hold a favorable view of the law, with 36 percent disapproving. The poll of 1,000 Americans was conducted March 22nd -25th, with a margin of error of 4.1 points.

Support for the cuts, which Trump hailed as "the largest tax cut" in history (it isn't), held stead based on polling conducted last month. The upside-down approval numbers could be indicative of a larger trend in U.S. politics—the so-called "blue wave" which Democrats are hoping will enable them to retake control of the U.S. House of Representatives. According to HuffPo,

Several other surveys released in the latter half of March also suggest that the law’s popularity has either dipped or stagnated. Economist/YouGov polling, which put net support for the law as high as +4 percent in February, last pegged it at -6. Quinnipiac’s surveys, which have put the bill’s backing between -8 and -14 since February, currently show it at a -9. And a recent CNBC poll also found that relatively few workers were reporting a positive effect on their paychecks.

Interestingly, the HuffPost/YouGov poll also indicated that Americans were more concerned over the tax law's effects on the country as a whole, rather than how it would benefit them personally. Estimates have predicted that such a massive slash in revenue would cause the federal budget deficit to increase by a trillion dollars.

As of last week, the national debt surpassed $21 trillion dollars.

Americans, regardless of their opinions of the plan, remain more likely to say they are influenced by the law’s consequences for the country, rather than its effects on them personally, according to the HuffPost/YouGov survey. Of those who favor the law, 77 percent credit their support to a belief that its passage will benefit the country, while just one-quarter cite its benefit to them (respondents could choose both or neither options). Of those who oppose the law, 83 percent say it’s because of its effect on the country, and just 29 percent that it’s because of the law’s effect on them.

The poll would seem to echo the CNBC All-America Economic Survey conducted two weeks ago.

It indicated that only 32 percent of Americans are noticing any meaningful tax savings or increases in their paychecks, which is something Trump and Congressional Republicans had promised the tax cuts would deliver.