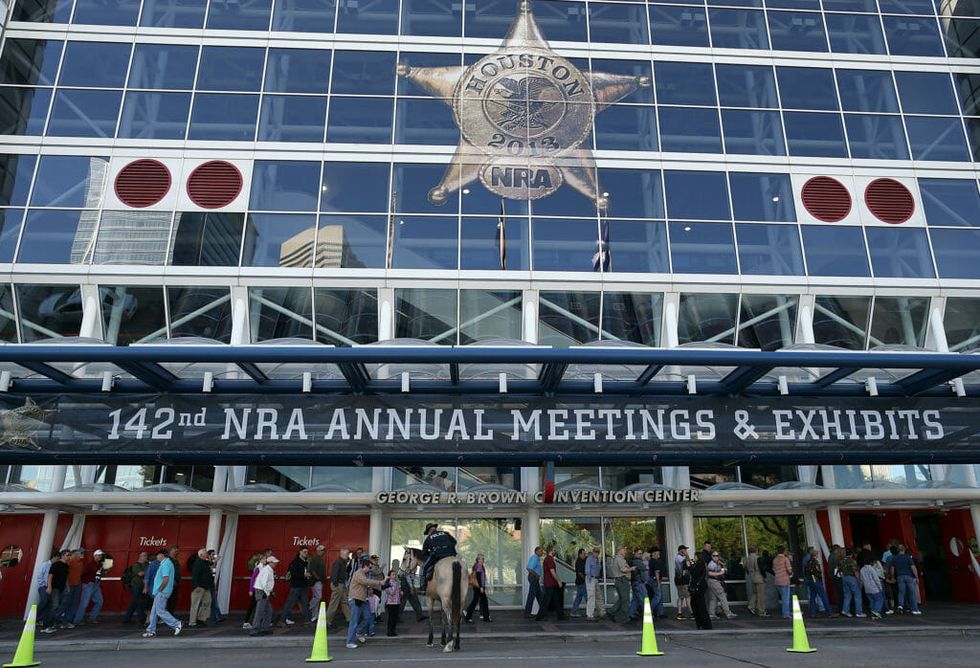 HOUSTON, TX - MAY 04: Attendees line up to enter the 2013 NRA Annual Meeting and Exhibits at the George R. Brown Convention Center on May 4, 2013 in Houston, Texas. More than 70,000 peope are expected to attend the NRA's 3-day annual meeting that features nearly 550 exhibitors, gun trade show and a political rally. The Show runs from May 3-5. (Photo by Justin Sullivan/Getty Images)

"According to the study, when approximately 80,000 firearm owners and enthusiasts attended conventions, the number of gun-related injuries plummeted," Newsweek reported on Wednesday, following the study's release.

The study, conducted by Harvard University Doctor Anupam Bapu Jena and Andrew Olenski of Columbia University, found a "20 percent reduction in gun injuries during convention dates vs identical days in surrounding 3 weeks." Jena and Olenski also noted that the most significant drop in injuries during NRA conventions was among men, "who comprise the majority of convention attendees."

Jena's study relied on firearm-related hospital and emergency room data three weeks before and three weeks after NRA conventions from 2007 - 2015. During these periods, the were significant drops in hospitalizations due to incidents involving firearms. States with the highest rates of gun ownership saw the most reductions in firearm injuries during NRA conventions and that the more convenient the convention is to attend, the more the rate of firearm injuries decreased.

As for why gun injuries occur less frequently during NRA convention periods, Jena hypothesizes that "brief reductions in overall gun use during convention dates" may play a role. "Due to convention attendance itself, brief closures of venues where guns may be used (ranges, hunting grounds)" may play a role, Jupa wrote. Jupa also acknowledged the possibility of "lower use if gun use sometimes occurs in groups."

"Fewer people using guns means fewer gun injuries, which in some ways is not surprising," Jena told CNN. "But the drop in gun injuries during these large meetings attended by thousands of well-trained gun owners seems to refute the idea that gun injuries stem solely from lack of experience and training in gun use."

5/5 What does this mean? - Interesting way to show risks associated with gun use. Even among plausibly experienced… https://t.co/GCJiMuMrvA
— Anupam Jena (@Anupam Jena) 1519856477.0

Outside of the Harvard study, however, publicly-funded research on gun safety is sparse. Since the late 1990's, the United States government has refused to fund any meaningful study into gun violence or how to prevent it. "Gun-control research in the United States essentially came to a standstill in 1996," the Washington Post reported in 2017. "After 21 years, the science is stale."

This is due in large part to the enormous lobbying power of the NRA, whose influence resulted in the Appropriations Act of 1997; this law prevented the CDC from conducting any meaningful scientific research on the causes of and possible solutions to gun violence in the United States.

In the Appropriations Act of 1997 Representative Jay Dickey got an amendment passed that prevents the CDC from stud… https://t.co/GJiVkp97sd
— Brian Schatz (@Brian Schatz) 1519673651.0

As Dr. Jupa's Harvard study indicates, scientific analysis and data can save lives. It's time for our leaders in Washington to start relying on science, rather than emotion, to dictate public health crises such as gun violence.