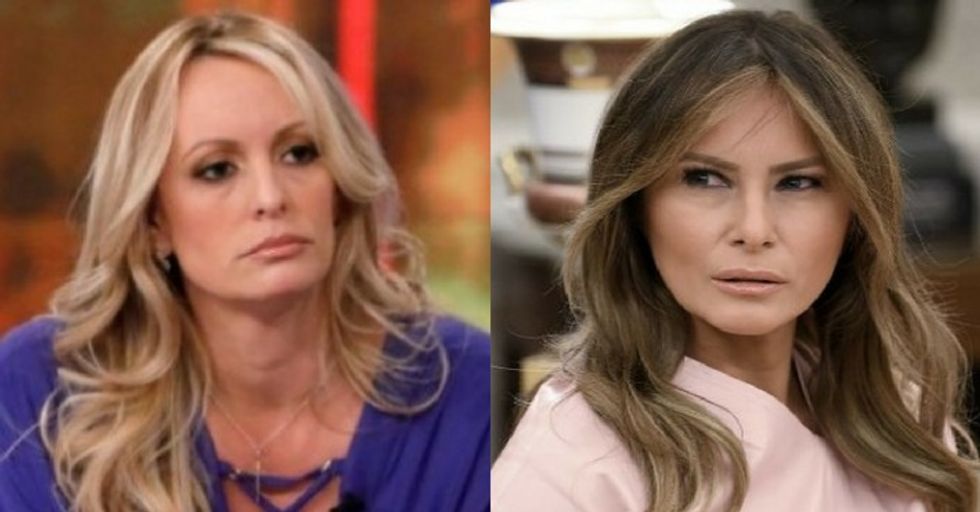 The First Lady of the United States garners a lot of attention from the media and the public. In the modern era of social media and smart phones, the last few FLOTUS saw analysis of every public appearance and outfit they wore skyrocket.

As a former model, the current FLOTUS Melania Trump knows her way around a photo-op, but likely never faced the level of public scrutiny into her private life she experiences now. While she did marry a man who constantly courts publicity for his primary source of income—trading on the Trump brand— did she sign up for this?

An ally that may surprise some says the answer is no.

The dancer, actress, screenwriter and director who prefers to be known by her professional pseudonym—Stormy Daniels—came to the defense of Melania Trump's right to privacy in an interview with UK paper the Mirror.

During the interview, the Mirror raised the question of the FLOTUS's happiness in her marriage.

"People should stop speaking for her. Maybe she’s happy."

"Everything we say about her is a projection. Some people misplace sorrow and pity on another person."

"The entire world would be interested to know what she feels. But if we never know, that is her right and I support it."

Support for any FLOTUS is a fickle thing. Some love her, some love to hate her and public opinion often turns on a dime with one kind act or a political misstep.

It was an honor to meet and have tea with Her Majesty Queen Elizabeth ll. @POTUS and I enjoyed the visit and her co… https://t.co/4bmMZCEfDX
— Melania Trump (@Melania Trump) 1531569754.0

However the point that no First Lady—or future First Gentleman—received public placement to be in their position is valid. The public voted for their spouse, not them.

As expected, reactions on social media were mixed. Most focused on the FLOTUS's life and her ability to speak for herself rather than asking about her right to privacy which was the point of Stormy Daniels' statements.

@thehill Speaking for her? They are always talking about her and criticizing her. Our beautiful FLOTUS can speak fo… https://t.co/1DtLJbiwbF
— Ernestine Lascano (@Ernestine Lascano) 1535328108.0

@RealArthurBlake @dontgetongab @Mediaite Pretty sure she knew exactly what she was getting into. There is a lot more to marriage than sex.
— zxq9 (@zxq9) 1535329494.0

@thehill the woman who knowingly married a cheater after two failed marriages who needed a working visa, came for a… https://t.co/EUovUkIX2y
— Regina Webster (@Regina Webster) 1535327435.0

However some appreciated the sentiment from Daniels as the following shows.

And while many posted comments pointing out the adult entertainer allegedly engaged in an affair with a married man, others emphasized it was the married man who betrayed his wedding vows, not Stormy Daniels.

Daniels met Trump at a Lake Tahoe golf event in 2006, four months after his wife gave birth to their son. She alleged they had sex once at the event and got together on two further occasions.

Daniels' ongoing lawsuit against the President and his former attorney and fixer, Michael Cohen, prevented her from sharing details of their affair.

But while other women accused the President of sexual harassment and assault—a claim Trump gave credence to in the now infamous Access Hollywood hot mic tape and in comments on the Howard Stern Show about his tenure with the Miss Universe, Miss USA and Miss Teen USA pageants, Daniels made it clear their three encounters were consensual.

"I have to be very clear he DIDN’T do that to me, it was consensual. But if the allegations from other women are true he should be in jail."

Daniels' lawyer, Michael Avenatti, asked in March for the court to allow him to depose the President. As of now, the lawsuit continues.