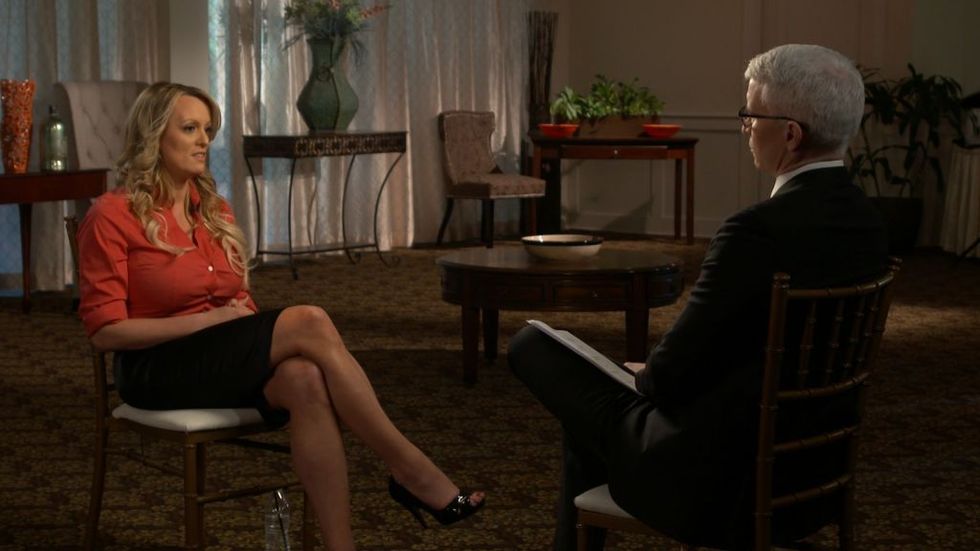 Stephanie Clifford (aka Stormy Daniels) in her interview with Anderson Cooper on "60 Minutes." (Photo by CBS via Getty Images)

Clifford recalled she was on her way to a fitness class with her infant daughter in tow when a man stopped her in a Las Vegas parking lot.

“I was in a parking lot, going to a fitness class with my infant daughter. T– taking, you know, the seats facing backwards in the backseat, diaper bag, you know, gettin’ all the stuff out,” Clifford told 60 Minutes correspondent Anderson Cooper. “And a guy walked up on me and said to me, ‘Leave Trump alone. Forget the story.’ And then he leaned around and looked at my daughter and said, “That’s a beautiful little girl. It’d be a shame if something happened to her mom.” And then he was gone.”

Now, she's taking steps to identify the man in question.

"We're going to be releasing that tomorrow, along with a significant reward, asking that the public come forward, asking to identify this individual," Avenatti said, adding that his team is "close" to identifying the man who allegedly threatened Clifford.

The news comes on the same day that Clifford, in a new court filing, said that she would not have signed a hush agreement in 2016 had she known that Trump himself was not a party to it:

Had I known that Trump was not going to sign both documents or that he was going to later claim that he was not a party to the settlement agreement, I would have never signed either document nor would I have accepted the $130,000 payment.

Trump's personal attorney, Michael Cohen has found himself at the center of the questions regarding a payment Clifford received from him as part of the non-disclosure agreement to keep her from discussing a sexual encounter with Trump back in 2006, while he was married to his current wife, Melania, and just a few months after Melania gave birth to their son, Barron. A separate lawsuit filed by Clifford contends that Cohen initiated a “bogus arbitration” hearing against her without notifying her beforehand, and a copy of the restraining order against Clifford confirms that the judge made a “one-party” ruling that did not require her to be notified.

Cohen has claimed that he paid Clifford out of his own pocket and that the president never reimbursed him for the settlement. But during the 60 Minutes broadcast, Clifford’s attorney, presented documents showing that the payment was sent to Cohen at his Trump Tower location, and communicated through his official Trump Organization email, indicating that he made the payment on Trump’s behalf. Analysts have posited that the exchange of funds could well be an illegal campaign expenditure on Trump’s behalf.

The New York Times reports that the F.B.I. raided Cohen's offices earlier this afternoon "seizing records related to several topics" including payments to Clifford. Federal prosecutors in Manhattan obtained the search warrant after receiving a referral from special counsel Robert Mueller, who oversees the federal investigation into Russian interference during the 2016 presidential election. The Times notes that the search does not appear to be directly related to Mueller's investigation, and is likely the result of "information he had uncovered and gave to prosecutors in New York."

It's a case of many twists and turns, magnified even further after the 60 Minutes interview.

I hereby demand that you and your client cease and desist from making any further false and defamatory statements about my client, that you immediately retract and apologize to Mr. Cohen through the national media for your defamatory statements on 60 Minutes, and make clear that you have no facts or evidence whatsoever to support your allegations that my client had anything to do whatsoever with this alleged thug.

Most of what you have been stating to the press, particularly these baseless allegations of criminal conduct, have absolutely nothing to do with the underlying contract dispute between Ms. Daniels and Essential Consultants LLC. Moving forward I would ask that you refrain from any further false accusations and litigate this case in court on the actual merits.

A copy of this correspondence is provided below:

The White House, for its part, has continued to deny that President Trump ever had an affair with Clifford, but last week, aboard Air Force One, the president broke his silence when asked if he was aware of the hush money Cohen paid Daniels.

Another reporter asked the president: “Do you know where he got the money to make that payment?”

“Did you ever set up a fund of money that he could pull from?” the reporter asked, but Trump was finished, choosing to ignore the question and, instead, point out another reporter for discussion about a different topic.

Our case just got that much better. And we very much look forward to testing the truthfulness of Mr. Trump's feigned lack of knowledge concerning the $130k payment as he stated on Air Force One. As history teaches us, it is one thing to deceive the press and quite another to do so under oath.

Avenatti also seeks to depose Cohen and Trump. In a motion filed in California yesterday evening, he also asked for the production of documents on topics relating the agreement. Avenatti requests a deposition of Trump of no more than two hours, a deposition of Cohen of no more than two hours and 10 requests for production of documents directed at Trump and Cohen. The filing notes that Clifford is seeking an expedited jury trial to determine the validity of the agreement.

The motion is Avenatti's second attempt to depose the two men. A California federal judge last month put a temporary stop to Avenatti's initial motion for an expedited trial and discovery process, saying Avenatti's motion was "premature" because Trump and Essential Consultants LLC, the company established by Cohen to pay Daniels the $130,000, had not yet filed a petition to compel arbitration.