Donald Trump's Treasury Secretary Just Tried Blaming Democrats for the Ballooning Deficit, and People Are Calling Him Out 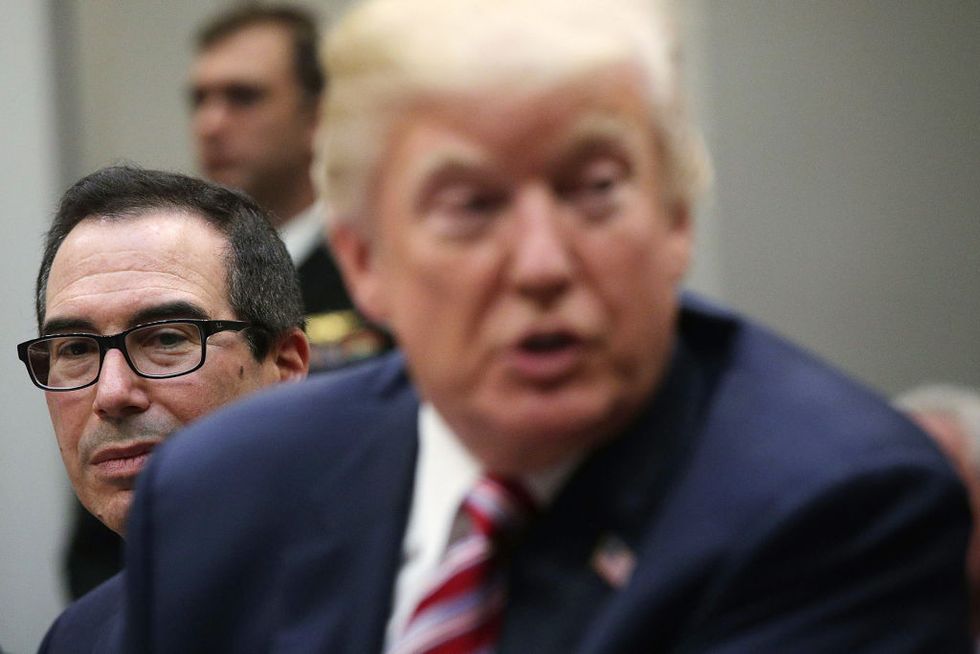 With the federal budget deficit up to $205 billion (a 48% increase since this time last year), it's unsurprising that Republicans are looking to deflect blame.

That's exactly what Treasury Secretary Steve Mnuchin did in a recent interview with Bloomberg, asserting that in order to get enough money for an increased defense budget, non-military spending demands had to be conceded to the Democrats.

“In an effort to get the military spending -- which the president thought was critical and which I fully support -- given the issues we have all over the world and the under-investment we have had in the last eight years, this required bipartisan support and the Democrats required big increases in non-military spending. So that’s a major component of deficit today.”

Under President Obama, defense spending had peaked in 2011, but congressional Republicans, at the behest of the Trump administration, set new records this year at over $874 billion.

Americans know who is to blame.

Many called out Republicans for lessening federal revenue through impractical tax cuts included in the Republican tax bill, which was passed one year ago.

@bpolitics Yes, it was so cruel when Democrats demanded that insanely expensive tax cut a year ago.
— Erin Altman (@Erin Altman) 1545169362.0

@thehill Its easy to blame Democrats, but @realDonaldTrump signed the omnibus and tax cuts with a Congress complete… https://t.co/CGUg9Rltyw
— Mark Masters (@Mark Masters) 1545171663.0

Not to mention, Mnuchin has his own woes when it comes to misuse of funds.

Mnuchin's plane travel has cost taxpayers around $1 million, and he's met criticism for using military planes on flights to domestic locations instead of opting for a smaller aircraft.

One image encapsulated this misuse of money to the public.

In addition, Mnuchin and his wife frequently flaunt the proximity of Mnuchin's job to the nation's funding.

Though Mnuchin may be blaming Democrats for the deficit, maybe he should examine how far the taxpayer dollar can actually stretch.

@HuffPostPol Corrupt, self serving hypocrites, cronies with no morality, are converting our taxes for personal use!… https://t.co/hxk0ovnSD9
— Dave N. Singh (@Dave N. Singh) 1507353453.0

@HuffPostPol He has control of America's cash machine and he knows how to use it. The eclipse trip was high-priorit… https://t.co/YQj3YQJFtj
— Moe Schutte🇨🇦 (@Moe Schutte🇨🇦) 1507353570.0

The deficit is slated to increase in 2019.