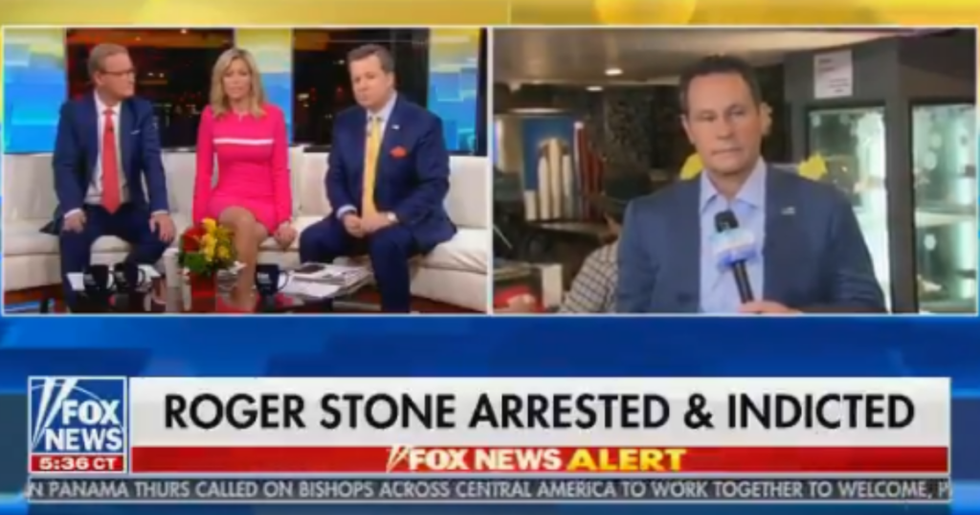 FBI agents stormed Stone's Florida home early Friday morning and arrested Stone, whose connections to Wikileaks during the 2016 presidential election have been under the eye of Mueller and his team of prosecutors.

The indictment alleges that Stone discussed Wikileaks with the Trump campaign in the summer of 2016 and "information it might have had that would be damaging to the Clinton Campaign.” In July of that year, Wikileaks published hacked Democratic National Committee emails. The conversations continued through October, following subsequent Wikileaks dumps, the indictment says.

Stone also stands accused of lying to the House Permanent Select Committee on Intelligence about his connections to Wikileaks and encouraging an associate to commit perjury.

While the indictments do not accuse Stone of directly colluding with Russia, however, documents show that Stone was in cahoots with Wikileaks, which obtained emails stolen by Russia, at the behest of the Trump campaign.

This technicality led to a meltdown on Fox & Friends after news broke of Stone's arrest.

“Everyone was speculating, ‘When is the investigation going to be complete? When is the special counsel going to wrap everything up?’” host Ainsley Earhardt asked. “What does this mean for that now? Does this mean it drags out for even more months? Because there were already rumors that it could end in February, that he could be turning in his findings in February—who knows!”

Co-host Steve Doocy added, not citing any evidence, that "this could be one of the wrap-up indictments" in Mueller's probe. “When you look at these seven counts from the grand jury: Obstruction of an official investigation, false statements to Congress, and perhaps witness tampering, once again, where is the Russia collusion?” Doocy asked.

Hmm, who could be watching and hoping for some spin?

@revrrlewis with manafort giving internal polls to russians we are so past collusion ...trump and fox need to move… https://t.co/KjTuDfFECx
— suns dial (@suns dial) 1548424507.0

Later on, co-host Ed Henry said the charges against Stone are serious.

Smith then accused Mueller of using his investigation as a "political instrument" against Trump and as "an instrument against an American institution," referring to the 2016 presidential election.

“The American people elected Donald Trump,” he continued. “They did not elect Robert Mueller as a fourth branch of government to continue to attack the election."

@thedailybeast Where? Russians hacked DNC, sent trove of information to Wikileaks for dissemination. Stone acted a… https://t.co/sLaba2hz70
— Got Speech? (@Got Speech?) 1548424832.0

So much spin, too little valium.