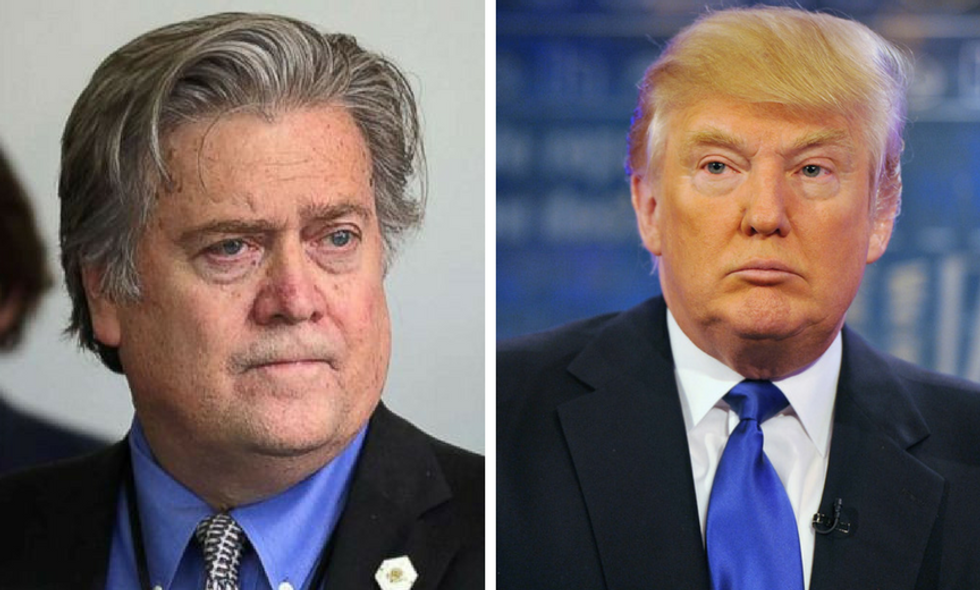 Monday night, Donald Trump gave a prime time address to the nation on how he intends to move forward in Afghanistan.

During the speech, Trump made clear that he would not be pulling U.S. forces out of Afghanistan and in fact left the door open to adding more troops on the ground there. He acknowledged that this was at odds with the position he held throughout his campaign last year.

"My original instinct was to pull out -- and, historically, I like following my instincts," Trump said. "But all my life I've heard that decisions are much different when you sit behind the desk in the Oval Office. In other words, when you're President of the United States."

"I will not say when we are going to attack, but attack we will," Trump said.

This change in position did not go unnoticed by many on the left and right, most notably Breitbart News, the rightwing blog where Trump's former Chief Strategist Steve Bannon returned shortly after leaving the White House last week.

Among the headlines that blared from Breitbart's pages after the speech included "Trump’s ‘America First’ Base Unhappy with Flip-Flop Afghanistan Speech,” "Trump Echoes Obama's 'Blank Check' Rhetoric In Afghanistan Speech," and “His McMaster’s voice: Is Trump’s Afghanistan policy different from Obama?”

“President Trump unveiled his plan for Afghanistan after seven months of deliberation Monday evening, announcing tweaks around the edges of the current strategy instead of a different approach."

Trump's #Afghanistan speech was Obama's speech minus the deadline & details. Like the bit about Pakistan, not convinced we can deliver India
— Joel B. Pollak (@Joel B. Pollak) 1503365782.0

This comes just a day after Vanity Fair reported that a high level Breitbart staffer made clear that if Trump shifts left post-Bannon:

NYT's Maggie Haberman sees this as a potentially ongoing trend now that Bannon is out of the White House.

Although Breitbart themselves insist they've been calling out Trump consistently: