Steve Bannon Has a New Plan to Save Trump From Mueller, and Trump's Going to Love It

He knows how to push Donald's buttons. 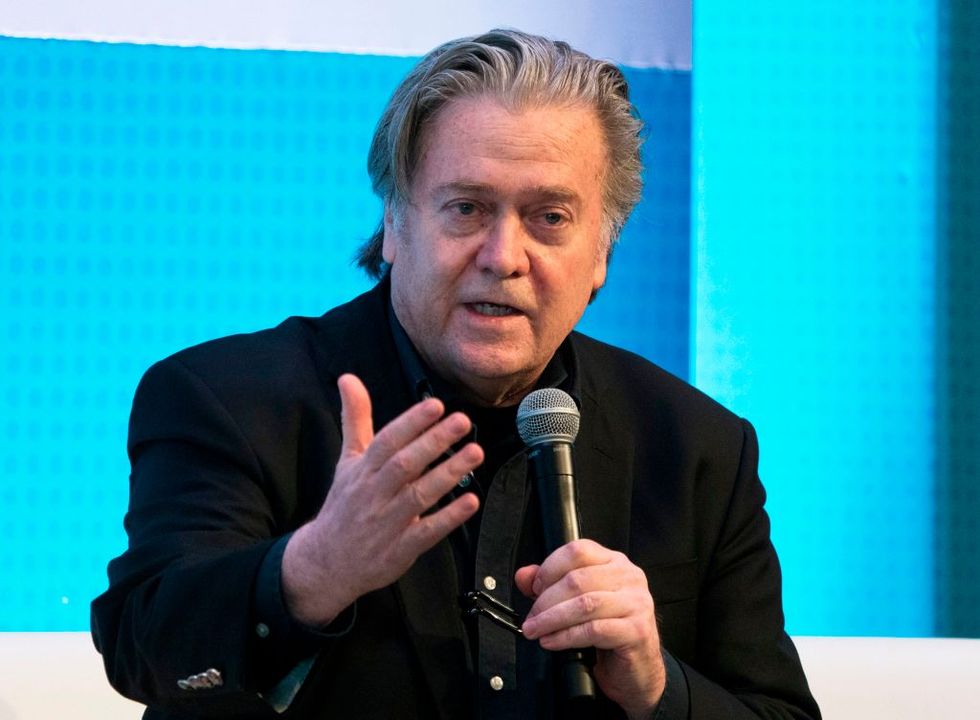 Steve Bannon, President Donald Trump's former chief strategist, is pitching a plan to the White House to cripple Robert Mueller's investigation into Russian interference in the 2016 presidential election. Bannon has remained in touch with West Wing aides and congressional allies despite his ouster last summer, according to four individuals with knowledge of the discussions.

The first step, according to Bannon, is for Trump to fire Deputy Attorney General Rod J. Rosenstein, who oversees the work of the special counsel and who this week signed off on a search warrant of Trump’s longtime personal lawyer, Michael Cohen.

CNN reported earlier this week that Trump is considering firing Rosenstein. A source familiar with the discussions told the news outlet that Trump is "still upset" over the FBI's raid of Cohen's office, and that "he hasn't had time to study the details of the raid or listen to his advisers, including his legal team," which is currently working to address the conflict in Syria.

The source said Trump could still sit down for an interview with Mueller, but that "both sides need to keep their powder dry."

Bannon recommends that the White House cease cooperating with Mueller and for Trump to invoke executive privilege. In doing so, Trump would attempt to render interviews with Mueller's team with White House officials "null and void."

“The president wasn’t fully briefed by his lawyers on the implications” of not invoking executive privilege, Bannon told The Washington Post. “It was a strategic mistake to turn over everything without due process, and executive privilege should be exerted immediately and retroactively.”

But would invoking executive privilege actually protect Trump from Mueller's investigation? As The Post points out, likely not:

Legal experts are dubious about Bannon’s idea that the White House could suddenly claim executive privilege on interviews that were given voluntarily by officials and be able to exclude them from an investigation that is partly reliant on those interviews. They also wonder if this action would even be allowed under the law and are certain it would be challenged in court.

Bannon, who once advocated for a "hands-off" approach to the Russia probe, believes the investigation has already encroached upon its initial mandate:

I have the utmost respect for Bob Mueller and Attorney General Jeff Sessions, but the developments over the past two weeks make it the right time to shift the center of gravity of this back to Capitol Hill. Make the Republican Party own this, force them to have his back.

Although Bannon still has the ears of some Trump aides in the White House, there is no indication that Trump would be willing to follow Bannon's advice or is even aware of the plan.

According to a senior administration official who also spoke to Washington Post reporters, White House insiders "remain skeptical" that Trump, who once esteemed Bannon, would follow Bannon's advice.

If you say his name in front of the president, it’s not a pretty sight,” said the official. “The president really goes off about him.”

Bannon's suggestions, The Postobserves, come as "Trump boosters in Congress are preparing to take legislative action against Rosenstein and other Justice officials over the disclosure of documents related to the Russia investigation. That push is seen by Bannon and others in the White House as a cause that could prompt Trump to act and shift much of the Russia investigation to Capitol Hill, where Republicans control both chambers."

Meanwhile, a bill to protect Robert Mueller is headed to a committee vote. The Senate Judiciary Committee, The New York Timesreports, plans to vote on bipartisan legislation introduced yesterday that would allow special counsels like Robert Mueller to appeal their firing to a panel of judges and possibly be reinstated.

The president railed against the paper, saying, "If I wanted to fire Robert Mueller in December, as reported by the Failing New York Times, I would have fired him. Just more Fake News from a biased newspaper!"

Bannon's conversations with Trump administration officials have so far remained through back channels, and he "remains sensitive about directly approaching Trump" with his plans ever since his ouster and subsequent fall from grace, which became further exacerbated after the president's attorneys accused Bannon of breaking a confidentiality agreement by making critical comments about Trump in Fire and Fury: Inside the Trump White House, Michael Wolff's controversial exposé.

According to the individuals who, in order to discuss private conversations, spoke to Post reporters on condition of anonymity, federal investigators could raise questions about such exchanges if the participating parties were identified.

The individuals note that some top advisers to the president, such as White House counsel Donald McGahn, are "said to be alarmed by the suggestions to fire Rosenstein or Mueller" and fear the impulsive actions could trigger mass resignation at the Department of Justice and cause a constitutional crisis. McGahn himself is likely to resign if Rosenstein is fired, the individuals said.

Sarah Huckabee Sanders, the White House Press Secretary, has remained tight-lipped about whether Trump plans to fire Rosenstein, only telling the press corps during yesterday's briefing, “I don’t have any personnel announcements.”