Steve Bannon Says Martin Luther King Jr. Would Be Proud of Donald Trump, and the Internet Can't Even 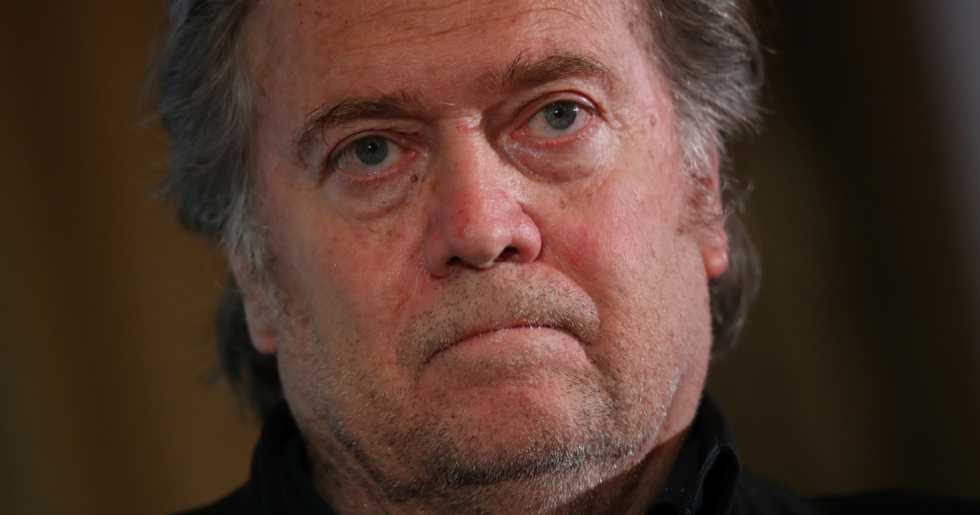 PRAGUE, CZECH REPUBLIC - MAY 22: Steve Bannon, former White House Chief Strategist to U.S. President Donald Trump, attends a debate with Lanny Davis, former special counsel to Bill Clinton, at Zofin Palace on May 22, 2018 in Prague, Czech Republic. The debate, moderated by former Czech ambassador to the U.S. Alexandr Vondra, was over the current course of America and was sponsored by Czechoslovak Group, a holding company of Czech and Slovak defense industry companies. (Photo by Sean Gallup/Getty Images)

In an interview Tuesday night, Bannon touted low black and Hispanic unemployment under Trump as a testament to King's legacy of fighting for equality and civil rights.

Bannon, who rose to fame running the conservative news outlet Breitbart before Trump hired him as one of the top advisers at the White House, claimed that "anybody," including MLK, "would be proud" of these economic numbers, effectively dismissing Trump's long history of making racially charged remarks about black and Hispanic people.

Look at the unemployment rate we had five years ago. You don’t think Martin Luther King would sit there and go: 'You're putting black men and women to work. Lowest unemployment rate in history and wages are starting to rise among the working class. And you're finally stopping the illegal alien labor force that's coming in to compete with them every day and destroying the schools and destroying the health care.' Absolutely.

While low unemployment is holding steady at under four percent, much of this is due to the policies of Trump's predecessor, President Barack Obama, who in 2008 became the first African-American elected to the presidency. Obama was reelected in 2012.

“It’s not as if black unemployment was 18 percent under Barack Obama and, as soon as Trump took office, it plummeted. Black unemployment fell fairly consistently from 2010 on, as did the rates for whites and Hispanics," wrote Philip Bump of the Washington Post. "From January to December 2017, the unemployment rate among black Americans fell 1 percentage point. During the same period in 2016, it fell the same amount. In 2015, it fell 1.9 points. The previous year, it fell 1.5 points. The year before that, it fell 1.8 points.”

Bannon's remarks to the BBC sparked a firestorm on Twitter, with some questioning why the BBC agreed to give the conservative pundit any airtime. "There is no journalistic value to it," one user wrote.

Others echoed these criticisms, accusing the BBC of "chumming for viewers," and noting Bannon's history of supporting toxic candidates, many of whom have nefarious pasts.

"He says nothing of value," another viewer said.

@BBCNewsnight @realDonaldTrump @BBCTwo He says nothing of value. Stop capitalizing on his brand of crazy with click… https://t.co/ieoZv6aTju
— Jen H (@Jen H) 1527101701.0

But the displeasure of those who watched the interview didn't end there. Twitter slammed Bannon, calling him a "fascist" and "hateful."

"Why would you give TV time to that human dumpster fire?"

Adding to the inexplicable basis of Bannon's assertion, Eugene Scott of the Washingon Post pointed out that Bannon's comments "come during the 50th anniversary of the Poor People's Campaign, an initiative King started half a century ago to draw more attention to how the civil rights of low-income Americans were constantly in jeopardy."

The late pastor wanted people of color to have the same economic opportunities that white Americans enjoyed, but doing so would require combating racism in workplaces, policymaking and other spaces.