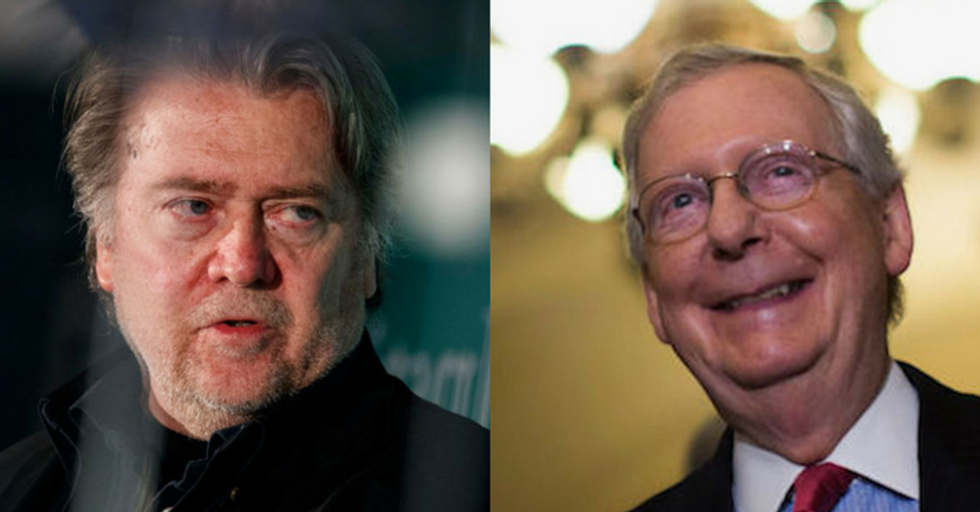 On Wednesday, former White House chief strategist Steve Bannon called for Senate Majority Leader Mitch McConnell to resign due to a lack of urgency in the Senate.

“What he ought to do is offer to resign as soon as taxes are done," added Bannon. "We can’t do it in the middle of taxes. … Because, I’ve got to tell you, there needs to be a sense of urgency in the Senate.”

Bannon returned to Breitbart News after leaving the official Trump administration. He brought his publication's brand of white nationalism and railing against the GOP establishment to aid Donald Trump in his presidential campaign. Kentucky Senator Mitch McConnell is the figurative head of that Republican establishment.

But the personal attention Bannon garnered and his loyal following among the alt-right often overshadowed the man he worked for. Once he became a liability, Bannon was asked to go.

President Donald Trump alternates between working with McConnell on major legislation and feuding with him whenever that legislation fails.

The only problem I have with Mitch McConnell is that, after hearing Repeal & Replace for 7 years, he failed!That should NEVER have happened!
— Donald J. Trump (@Donald J. Trump) 1503582161.0

The former White House chief strategist blamed Senator McConnell for allowing GOP legislation passed by the House to pile up in the Senate. Bannon says that inaction helps Democratic Senators.

“The House has actually voted on, I think it’s 180 bills that the Senate has not taken up, including many bills that would be a very difficult vote for Joe Manchin and Claire McCaskill and Jon Tester and Heidi Heitkamp and all of these red-state Democrats that we need to take down in 2018,” Bannon said. “And Mitch McConnell’s refused to do it.”

When asked if removing Mitch McConnell as Senate Majority Leader was a priority, Bannon acknowledged it was.