Stephen Colbert Just Slammed Ted Cruz For Buying Ads During Colbert's Interview With Beto O'Rourke Wednesday Night, and the Internet Is So Here For It 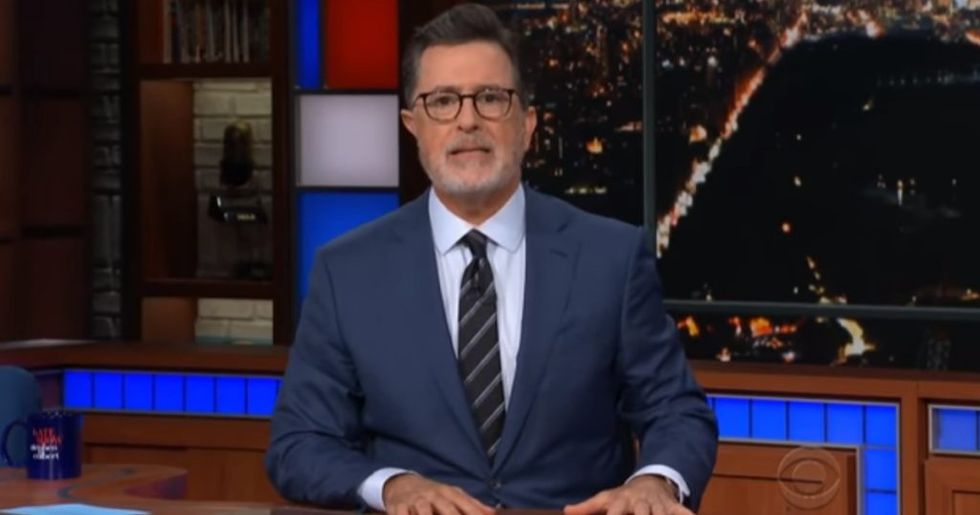 Senator Ted Cruz (R-TX) appears to be getting desperate in the hotly contested race for his seat.

Cruz made an ad buy during Stephen Colbert's interview with his opponent, Democratic Congressman Beto O'Rourke, on Wednesday's edition of The Late Show.

And Colbert ripped Cruz to shreds for it.

Right before O'Rourke sat down with Colbert, The Late Show host gave the audience the low down on O'Rourke and his fiercely progressive campaign.

Colbert noted how scared Cruz and his campaign must be by buying ads to counter O'Rourke's interview, as recent polling has shown the race to be a virtual dead heat. In Texas. TEXAS!!!!!

"Beto is running in Texas against incumbent Senator and man whose campaign staff is definitely watching this show right now, Ted Cruz, because it is close, which is scaring Republicans," Colbert said, particularly because Cruz has recruited President Donald Trump to help his campaign.

"You know it’s bad when you need backup from a man with a 36-percent approval rating,"  Colbert quipped. "Their backup plan is a celebrity endorsement from the herpes virus," he joked.

"Here’s how scared Ted Cruz is of Beto O’Rourke," Colbert continued. "He bought ads on my show tonight to counter his interview."

Colbert gave examples of attack ads run by Cruz against O'Rourke, many of which were personal and did not go over as well as Cruz had hoped.

In one ad, Cruz shared a picture of O'Rourke from his days in a punk rock band, which at the time made the internet swoon. "Maybe Beto can’t debate Ted Cruz because he already had plans," the ad said.

"Yes, his plans were being smoking hot in a naughty but approachable sort of way, like your best friend’s older brother who smells like weed and listens to Radiohead," Colbert said. "Read us your poems, Beto!"

In another ad, Cruz shared clips of O'Rourke using the F-word, which Colbert said is clearly not the behavior of a future Senator.

O'Rourke then bullet-pointed his progressive stances on issues, including his opposition to Trump's proposed border wall with Mexico, which Cruz, a naturalized American citizen from Canada, supports.

"The people of Texas are more than a match for President Trump or for politics as usual," O'Rourke said.

"We don't need a wall" says Texas Senate candidate @BetoORourke in his conversation with @StephenAtHome on tonight'… https://t.co/InBeHi4ASn
— The Late Show (@The Late Show) 1536802392.0

"People are coming out at this moment of truth,” O'Rourke, widely looked upon as a rising star in the Democratic Party, said. "They’re going to help us decide as a country, are we a nation of walls? Will we ban all Muslims or all people of one religion? Will we describe the press as the ‘enemy of the people’? Will we take kids away from their parents when they’re trying to claim asylum, fleeing from the most brutal countries in this hemisphere, if not the planet?"

O'Rourke further emphasized the need for progressive changes in Texas and the United States.

"Or are we going to be defined by our ambitions, the big things that we want to do, going from the least-insured state in the country to the one that leads on universal, guaranteed, high-quality health care for everyone?" he continued. "A state that values public education and pays their teachers accordingly and allows them to teach to a child instead of a standardized test? And this diverse state, the most diverse city in the country, Houston, Texas, could we lead on rewriting our immigration laws in our own image, reflecting our experience? We can do all of those things."

O'Rourke's summation? He's not running 'against' anything.

"We are not running against anyone or anything or any other political party," O’Rourke concluded. "We are running for this country, and I am so excited to be a part of it."

Cruz, who is so easily trollable, got what was coming to him on Twitter.

Is Cruz the Zodiac Killer? Probably not, but who cares, it's hilarious.

Just like these animals love whatever these things are they are smelling.

Never forget when Cruz, after a nasty primary campaign against Trump in 2016, worked a phone bank for Trump.

Then there was Cruz trying to play basketball with Jimmy Kimmel, which resulted in Cruz getting hit in the crotch with a basketball.

It was used in a mashup of O'Rourke skateboarding - perfectly.

And these inspired voters.

@colbertlateshow @JohnRMoffitt @BetoORourke @StephenAtHome I first saw Beto speak at a pro-immigration rally in Aus… https://t.co/MS3VpGKftI
— We the People 🦃 (@We the People 🦃) 1536808914.0

@colbertlateshow @BetoORourke @StephenAtHome This native Texan is voting for the @BetoORourke ! He actually cares a… https://t.co/Ty99UnGi1m
— purpleTexas (@purpleTexas) 1536815707.0

Come on, this is awesome.

Willie Nelson has spoken, y'all.