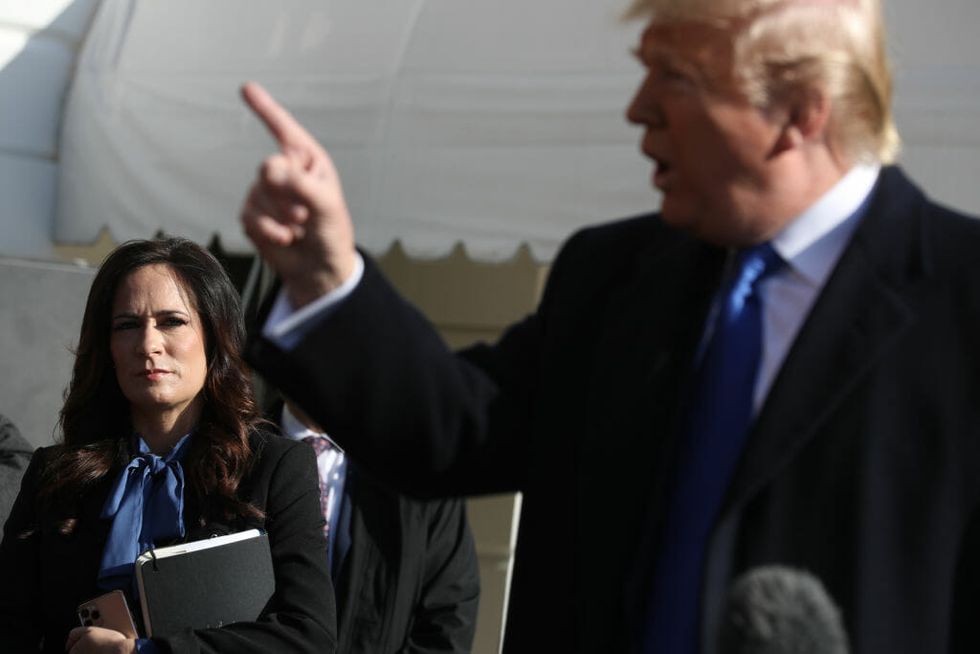 WASHINGTON, DC - NOVEMBER 08: White House Press Secretary Stephanie Grisham (L) listens to U.S. President Donald Trump talk to reporters before he boards Marine One and departing the White House November 08, 2019 in Washington, DC. Trump is traveling to Atlanta, Georgia, where he plans to kick off his Black Voices for Trump Coalition, an effort to attract more African-American voters. (Photo by Chip Somodevilla/Getty Images)

President Donald Trump was unexpectedly taken to Walter Reed Medical Center on Saturday for what White House Press Secretary Stephanie Grisham claims was a routine visit to conduct the first portion of his physical.

But people are skeptical after learning that his visit was unannounced to most of the Walter Reed staff, all of whom are notified ahead of a scheduled Presidential visit.

What's more, the White House has a medical facility on-site capable of performing a presidential medical exam. It's also unclear why the President is taking his physical in multiple portions.

Nevertheless, Grisham assured that the visit was standard, and that her comments were truthful:

“We're not going to get into security and movement protocols when it comes to the President, but as my statements said he's in good health and it was a routine checkup as part of his annual physical. I've given plenty of on the record statements that were truthful and accurate — actively trying to find and report conspiracy theories really needs to stop."

In a later tweet, she claimed the info was "extensive and honest."

EXACTLY! Thank you for helping me get the correct information out. Further speculation beyond the extensive & hones… https://t.co/LPZHiTzgLp
— Stephanie Grisham (@Stephanie Grisham) 1573960927.0

But Grisham—who has never conducted a White House press briefing despite being press secretary for months—is considered about as honest as her predecessors, Sarah Huckabee Sanders and Sean Spicer.

People took the opportunity to remind others that Grisham has never held a White House press briefing—a once-daily routine in past presidencies.

Another way a White House press secretary can "get the correct information out" is to hold an actual press briefing… https://t.co/YjeoB3ACuj
— Cheri Jacobus (@Cheri Jacobus) 1574050933.0

According to Jonathan Lemire, White House reporter for the Associated Press, Trump met with the Federal Reserve Chairman in the residence today instead of the West Wing. There is nothing on Trump's schedule today and he's remained out of public view. Mo further details about his unexpected trip to Walter Reed have been given.