Arkansas State Senator Is Being Hailed as a Hero For Her Impassioned Speech Protesting Republican Stand Your Ground Gun Bill, and We See Why 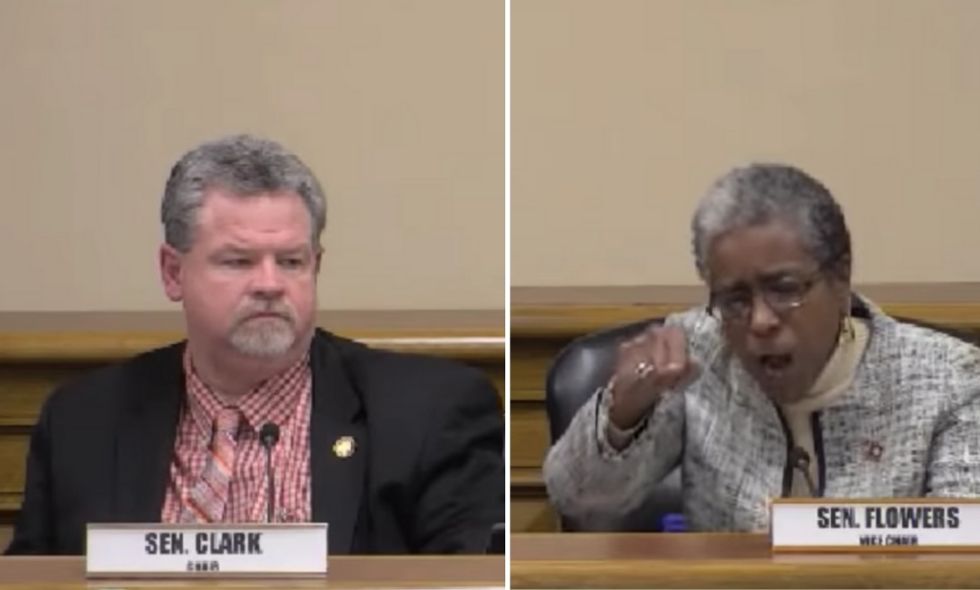 The Arkansas State Senate rejected a measure to expand a "stand your ground" gun law Wednesday night thanks to a fiery dissent by State Senator Stephanie Flowers (D).

Flowers blasted the proposed law for increasing the likelihood of violence against black Arkansans. In Arkansas, current law authorizes lethal force only if a person is "unable to retreat with complete safety."

Flowers brought the house down:

"I'll be as quick as I can, as quick as it takes to kill somebody I guess. You want me to be that quick. ... It doesn't take much to look on the local news every night and see how many black kids, black boys, black men are being killed with these Stand Your Ground defenses that these people raise, and they get off. So I take issue with that. I'm the only person here of color here. I am a mother, too. And I have a son. And I care as much for my son as y'all care for y'all's. But my son doesn't walk the same path as yours does. So this debate deserves more time."

Gun violence is a routine reality for Flowers and her community.

"I'm in Pine Bluff. We have killings regularly down there. ... I don't know where Mr. Ballinger is from. But I can tell you for a long time since I've been back here in Arkansas, I have feared for my son's life. Now he's 27 and he's out of Arkansas, and I thank God he is when you're bringing up crap like this. It offends me."

Flowers said she feels threatened for herself and her constituents when she sees guns being toted by her fellow lawmakers in the state capitol.

"I worry about my son. And I worry about other little black boys and girls and people coming into my neighborhood, into my city, saying they got open carry rights, walking down in front of my doggone office in front of the courthouse! That's a bully!"

And when the Republican committee chair tried to shut Flowers up, her response was perfect.

"No the hell I don't," Flowers fired back. "What the hell you going to do, shoot me? Senator sh*t, go to Hell."

Flowers - leaving no stone unturned - is being lauded as a hero.

@ProudResister State Senator Stephanie Flowers is spectacular! Don't know this woman, but sure do like her. #NationalHero
— Coupon Savings (@Coupon Savings) 1552031715.0

Flowers' powerful words struck a chord in many.

@ProudResister We need more like her in Congress. People who aren't scared and fight for what got them elected!!!
— Christina Duncan (@Christina Duncan) 1552032151.0

Thanks to the bill's defeat, Arkansas remains one of three states south of the Mason-Dixon line that requires a "duty to retreat" before using deadly force. Maryland and Virginia are the others.

The proposal would have broadened the "'stand your ground' territory beyond the home" - an expansion of the castle doctrine - "to any location where the person is lawfully present,'" the Arkansas Times wrote on Wednesday. "It explicitly states that a person acting in defense of self or another 'is not required to retreat before using deadly physical force' — so long as the lawfully present person is not engaging in criminal activity and did not provoke the other person. The bill eliminates all current provisions that describe retreating to avoid the need for deadly force. It further codifies that such a possibility cannot be considered in making a determination about whether use of deadly force was lawful."