After Outcry, U.S. Clarifies Its U.N. Vote Against Death Penalty Ban Including For LGBTs 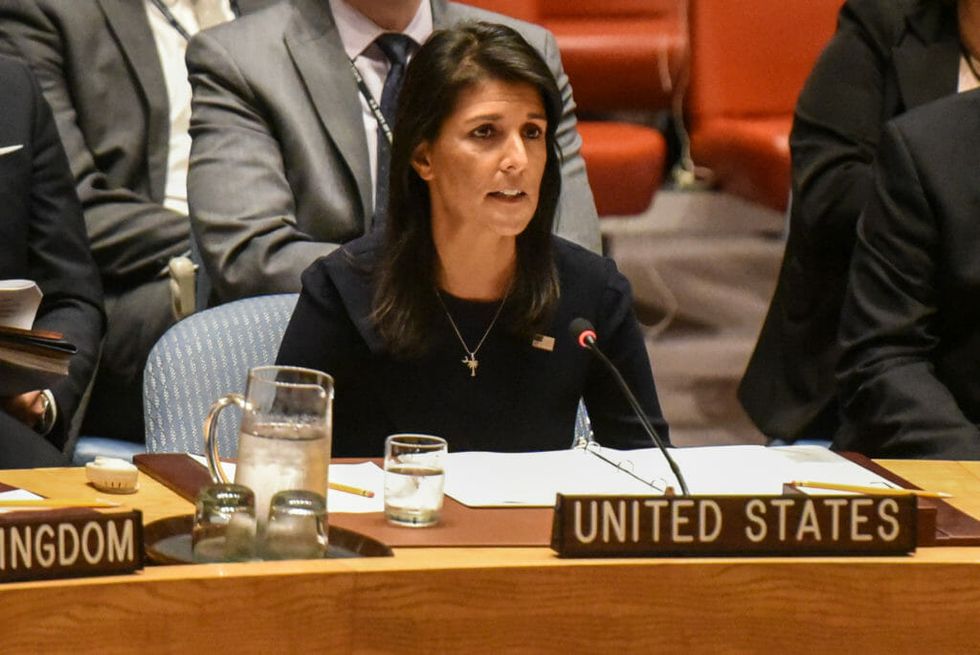 NEW YORK, NY - SEPTEMBER 4: Ambassador to the UN, Nikki Haley, delivers remarks during a United Nations Security Council meeting on North Korea on September 4, 2017 in New York City. The securty council was holding its second emergency meeting in a week after North Korea announced the detonation of what it called an underground hydrogen bomb September 3. (Photo by Stephanie Keith/Getty Images)

The State Department clarified its "no" vote on a United Nations resolution condemning the “imposition of the death penalty as a sanction for specific forms of conduct, such as apostasy, blasphemy, adultery and consensual same-sex relations” following an outcry from LGBTQ and human rights advocates.

The resolution, which you can read HERE, passed the United Nations Human Rights Council with 27 nations voting in favor, 13 voting against and seven abstentions. The United States joined countries such as China, Iraq and Saudi Arabia in opposing the move.

"We voted against that resolution because of broader concerns with the resolution’s approach in condemning the death penalty in all circumstances," said Heather Nauert, a State Department spokeswoman. "The United States unequivocally condemns the application of the death penalty for conduct such as homosexuality, blasphemy, adultery, and apostasy. We do not consider such conduct appropriate for criminalization.”

Jessica Stern, the executive director of OutRight Action International, a global LGBTQ human rights organization, acknowledged the U.S. vote on the U.N. resolution was misreported in a statement to NBC News:

There's been some misreporting and misconceptions. The U.S. always opposes this death penalty resolution, because it makes reference to a global moratorium on the death penalty. For both Obama and Trump, so long as the death penalty is legal in the U.S., it takes this position.

OutRight will call out the Trump administration on its many rights violations, its many abuses of power from LGBTI violations to xenophobia, but this particular instance is not an example of a contraction of support on LGBTI rights. It would be a mistake to interpret its opposition to a death penalty resolution to a change in policy.

Some LGBTQ advocates have expressed their dissatisfaction with the State Department's clarification, however.

"The death penalty is an LGBTQ issue, and you see that in the way it's applied in Saudi Arabia, Yemen, Sudan and other places where the penalty for same-sex activity is death," says Ryan Thoreson, a researcher at the LGBT Rights Program at Human Rights Watch. "When the U.S. is not willing to call that out, even in an unobjectionable resolution like this, it signals a kind of tolerance for the death penalty that should worry LGBTQ people."

In a statement released earlier this week, The Human Rights Campaign (HRC) called U.N. Ambassador Nikki Haley and the Trump administration’s vote against the resolution "beyond disgraceful":

Ambassador Haley has failed the LGBTQ community by not standing up against the barbaric use of the death penalty to punish individuals in same-sex relationships,” said Ty Cobb, director of HRC Global. “While the U.N. Human Rights Council took this crucially important step, the Trump/Pence administration failed to show leadership on the world stage by not championing this critical measure. This administration’s blatant disregard for human rights and LGBTQ lives around the world is beyond disgraceful.

Haley responded to the criticisms by noting that the U.S. voted "no" on a similar resolution under the Obama administration.

But what Haley failed to mention was that the 2014 resolution under the Obama administration did not include the language about same-sex relations and that the U.S. actually abstained.

“We cannot agree with the slant of this resolution in favor of a moratorium or abolition, nor with the generality expressed that use of the death penalty inevitably leads to violations of human rights,” Keith Harper, then the U.S. ambassador to the U.N., said at the time. "But because the resolution can contribute to open debate on capital punishment, “we have chosen to abstain rather than oppose this resolution, despite its flaws."