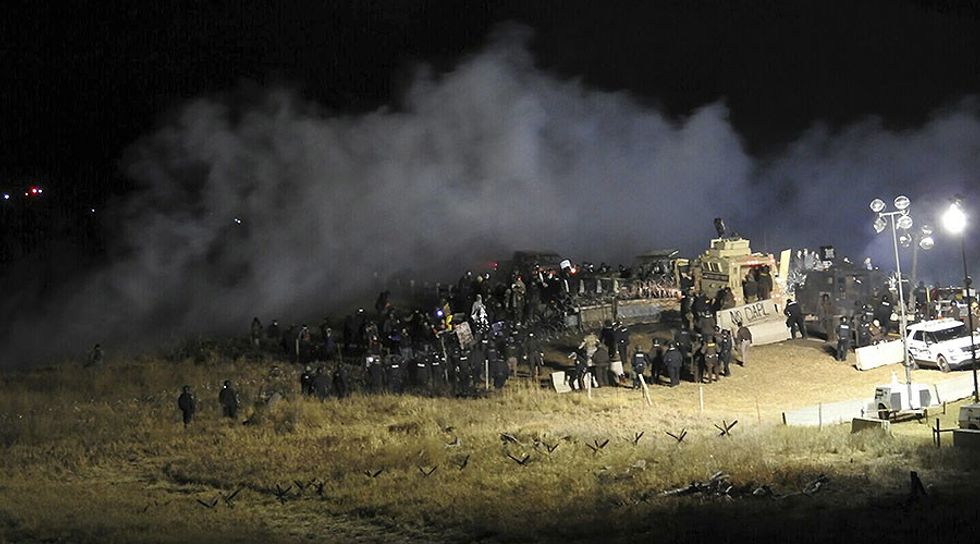 “They were attacked with water cannons,” said LaDonna Brave Bull Allard, a Standing Rock Sioux tribe member and founder of the Sacred Stone camp. “It is 23 degrees [-5 °C] out there with mace, rubber bullets, pepper spray, etc. They are being trapped and attacked. Pray for my people.”

The Morton County Sheriffs Department called the incident "an ongoing riot," and called the demonstrators "very aggressive." One person was arrested. A spokesman for the sheriffs department said authorities sprayed water to ward off protesters who were lighting fires on and around the bridge.

“The options are endure the tear gas or trample each other,” said Kevin Gilbertt, who posted a live stream of the incident to Facebook Live and interviewed an eyewitness on the scene who said the fires, contrary to the statement from the police department, were started by police projectiles, not protesters.

.@POTUS must protect the safety of Native Americans and their supporters who have gathered peacefully to oppose the… https://t.co/jtuaKj9ZDR
— Bernie Sanders (@Bernie Sanders) 1479694264.0

Local Native Americans and activists from across the nation have traveled to the Standing Rock site to try and block a planned $3.7 billion oil pipeline which would transport fracked crude from North Dakota’s Bakken oil field to a refinery near Chicago. The tribal leadership has alleged that the project could destroy sacred lands, but their attempts to block construction in court have been unsuccessful. Energy Transfer Partners, the Texas-based pipeline operator, has moved forward, building on lands indigenous leaders say contain sacred burial grounds.

Earlier this month, President Obama strongly signaled that he would favor a rerouting of the Dakota Access Pipeline to the north to avoid disturbing sacred burial grounds and possible water contamination. “We’re monitoring this closely,” Obama said at the time in an interview with NowThis. “My view is that there is a way for us to accommodate sacred lands of Native Americans. And I think that right now the Army Corps is examining whether there are ways to reroute this pipeline. We’re going to let it play out for several more weeks and determine whether or not this can be resolved in a way that I think is properly attentive to the traditions of First Americans.”

Obama's statement came as UN human rights investigation teams and foreign press representatives arrived to examine charges of mistreatment of protesters by local police. A representative of the UN’s permanent forum on indigenous issues, an advisory group, has been collecting testimony from protesters who have raised concerns about excessive force, and report unlawful arrests and mistreatment in jail where some activists have been held in cages. But this latest incident is a sign that the clash between demonstrators––who call themselves "water protectors"––and an increasingly militarized police force is far from over.

According to Jade Begay, a spokeswoman for the Indigenous Environmental Network, 167 people were injured; seven were taken to the hospital. In a statement posted on Facebook, the Standing Rock Medic & Healer Council expressed concern "for the real risk of loss of life due to severe hypothermia under these conditions.”

The standoff began around 6 PM local time when a group of about 100 protesters attempted to clear two burned trucks which formed a barricade on the bridge. Law enforcement erected the barricade behind the trucks––which have been in place for several weeks––and has forced all traffic

to take a 20-mile detour. (The bridge is on the most direct route from the Standing Rock Sioux Reservation to Bismarck, North Dakota.)

“The purpose of this action was to do something to remove that barricade because it’s dangerous,” said Begay, a Tesuque Pueblo and Diné who has been at Standing Rock since September. “That barricade poses a danger not just to everyone at the camp, but also to Cannon Ball and other communities that are south.” Begay confirmed that activists did light two bonfires to keep people warm and make meals. She added that other fires were started by law enforcement. Demonstrators were able to move one of the trucks before law enforcement responded with their weapons.

Frank Archambault, a member of the Standing Rock Sioux Tribe from Little Eagle, South Dakota, says police are using the barricade "as an excuse for us not to be able to lawfully protest. We got word that the drill is now on the pad so tensions are high right now.” The latest string of protests, he says, hold a symbolic significance: "We have a very harsh day coming up now. In my family we never celebrated Thanksgiving. It was always a day of mourning for the day that genocide began on this continent. This all just goes to prove what we’re talking about.”

About 85 percent of the pipeline's construction has been completed. The remaining work in North Dakota has been on hold by order of federal agencies, and Energy Transfer Partners still lacks a final permit it would need to drill under Lake Oahe, a Missouri River reservoir. Last week, the company took legal action, asking a federal judge to approve immediate construction. In court filings, Energy Transfer Partners accused President Obama and his administration of being “motivated purely by politics” and said it would “vigorously pursue its legal rights” to drill under the river that provides the water supply for the Standing Rock Sioux tribe. It added that the army’s “intransigence in completing its review has already cost Dakota Access hundreds of millions of dollars” and that additional delays could prove even more costly.

“Dakota Access Pipeline has waited long enough to complete this pipeline,” CEO Kelcy Warren said in a statement. “It is time for the Courts to end this political interference and remove whatever legal cloud that may exist over the right-of-way beneath federal land at Lake Oahe.”

Warren told the Associated Press that company has no alternative than to finish construction on the $3.8 billion pipeline. "There's not another way. We're building at that location," Warren said.