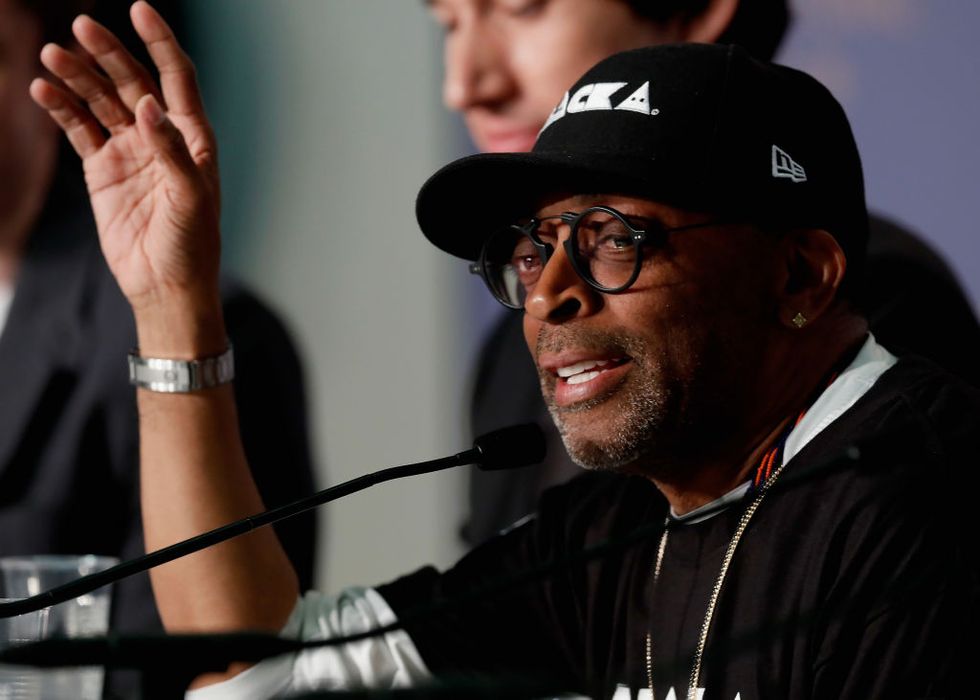 CANNES, FRANCE - MAY 15: Spike Lee speaks at the press conference for 'BlacKkKlansman' during the 71st annual Cannes Film Festival at Palais des Festivals on May 15, 2018 in Cannes, France. (Sebastien Nogier/EPA Pool/Getty Images)

While promoting his new film, Black KkKlansman, about an African American man who successfully managed to infiltrate the local Ku Klux Klan and even become the head of a local chapter, director Spike Lee had harsh words for President Donald Trump and recalled, with disgust, the president’s response to the Charlottesville protests.

"That was a murder and we have a guy in the White House––I’m not going to say his [expletive] name," said Lee in Cannes. "That [expletive] was given a chance to say we are about love and not hate. And that [expletive] did not denounce the [expletive] Klan, the alt-right, and those Nazi [expletives]."

He [Trump] could have said to the world, not [just] to the United States, that we were better than that. We look to our leaders to give us direction. To make moral decisions. We have to wake up. And we can’t be silent.

In August 2017, the president sparked outrage after he spread the blame for the violence which had erupted the previous weekend at the “Unite the Right” rally in Charlottesville, Virginia.

Trump’s first official statement on the demonstration––which resulted in three deaths and injuries of numerous others––came three days after it first began. He spoke after meeting with newly installed FBI Director Christopher Wray and Attorney General Jeff Sessions, and acknowledged that the Justice Department had opened a civil rights investigation into the death of Heather Heyer, the woman who was killed after she was struck by a Dodge Challenger driven by James Alex Fields, who had traveled to the city from Ohio to protest at the rally with fellow white nationalists.

Lee, whose film closes with footage of these protests, said the ending was unplanned.

"The (Charlottesville) tragedy happened after we finished; I was in Martha’s Vineyard," Lee said. "I saw what happened and right away I knew that this had to be [the] coda for the film."

In addition to noting that he sought the approval of Heather Heyer's mother before using footage of her death in Black KkKlansman––"I was not going to put that murder scene in the film without her blessing."––Lee called the proliferation of alt-right groups "a global problem":

I know in my heart, I don’t care what the critics say, we are on the right side of history with this film. Please excuse me for some profane words. But the [crap] that’s going on makes you want to curse.

Lee plans to release Black KkKlansman on August 10, the one-year anniversary of the Charlottesville tragedy. The film, which stars John David Washington as Ron Stallworth, an African American police officer who successfully infiltrated the local Ku Klux Klan, premiered to a 10-minute ovation at Cannes.

As The Hollywood Reporter noted:

The audience broke out in applause a half-dozen times during the screening, followed by four minutes of applause during the credits and a six-minute standing ovation. Afterward, director Christopher Nolan, who was at the premiere, was spotted giving Lee a hug.

The reactions out of Cannes have been overwhelmingly positive and social media has been abuzz with praise for the production:

Standing O for #blackkkklansman Congrats to the cast and crew, especially to the two screenwriters from… https://t.co/8teguE4KUv
— Jodi Erin (@Jodi Erin) 1526397430.0

The film also stars Adam Driver, Laura Harrier, and Topher Grace as a young David Duke, who would become an Imperial Wizard for the KKK. Duke himself made headlines after the "Unite the Right" rally for branding the media as "fake news" and accusing reporters of coercing the president into making his statement.

"It's amazing to see how the media is able to bully the President of the United States into going along with their FAKE NEWS narrative," he wrote at the time.

It's amazing to see how the media is able to bully the President of the United States into going along with their F… https://t.co/WLaQh8f7Qm
— David Duke (@David Duke) 1502731893.0

In a Periscope video shortly afterward, Duke said, “President Trump, please, for God’s sake, don’t feel like you need to say these things. “It’s not going to do you any good.”