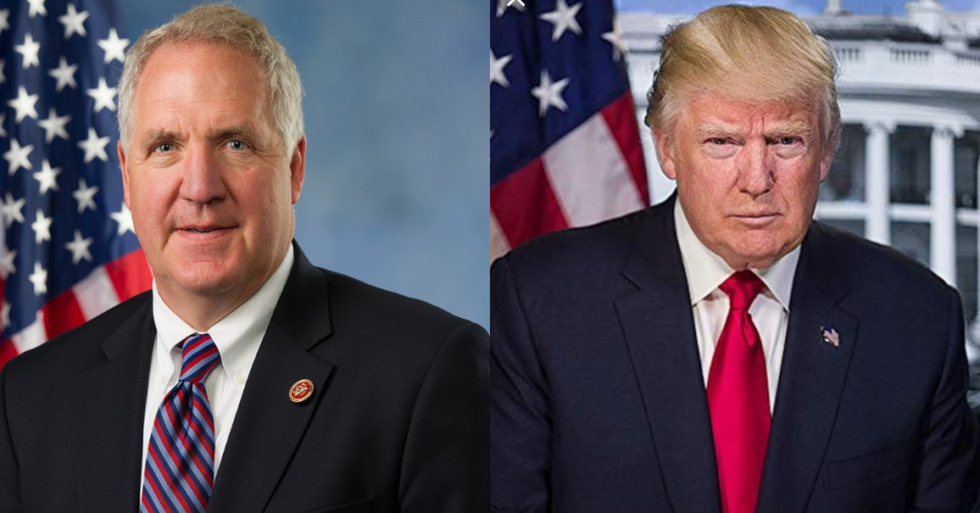 Every day it looks more and more like President Donald Trump's decision to abandon Kurdish allies and give Turkey and Russia the go-ahead to invade Syria will be the straw that finally breaks his unwavering allegiance from the Republican party. With forever-Trumpers like Pat Robertson, Senator Lindsey Graham and Representative Liz Cheney publicly criticizing the President, eventually, the exodus would begin.

GOP Representative John Shimkus—a 22 year veteran of the House of Representatives from Illinois who intends to retire in 2020—announced the end of his support for Trump.

“I’m heartbroken. In fact I called my chief of staff in D.C., I said ‘pull my name off the "I support Donald Trump" list'."

"We have just stabbed our allies in the back. The Kurds go back all the way to the first Gulf War."

Listen to the interview here.

In an official statement, Shimkus clarified:

"While my votes will continue to support the President's domestic policy agenda, because of this terrible foreign policy decision I asked that my name be removed from his campaign’s official list of supporters."

The implications of an established member of the GOP withdrawing their support for the President on the impeachment inquiry and reelection hopes for Trump are myriad.

People are encouraging more Republicans to ditch the President over Syria and the abandonment of Kurdish allies.

@JakeSherman One down. Is there an ethical Republican who IS running for re-election, or are they all corrupt?
— Joyce Resists (@Joyce Resists) 1570726217.0

Others thought the GOP should have left Team Trump long ago.

@JakeSherman @KimberlyEAtkins Abandoning the Constitution didn't do it, but this is his line?
— Anne McCarthy (@Anne McCarthy) 1570726976.0

@JakeSherman #999 of congressmen speaking up about this administration AFTER they retire. Cowards.
— Porter Francis (@Porter Francis) 1570726658.0

@JakeSherman @UninformedGuy Glad to know there’s a line somewhere between grabbing women by their genitalia and bac… https://t.co/yWUU8fP1wT
— Just Another Human (@Just Another Human) 1570741507.0

Despite all of the criticism, Trump continues to defend his decision. When he originally proposed the military withdrawal he changed his mind after fierce backlash.

This time he appears to be determined to support Turkey over the United States' Kurdish allies.

Make your feelings clear with this shirt available here.