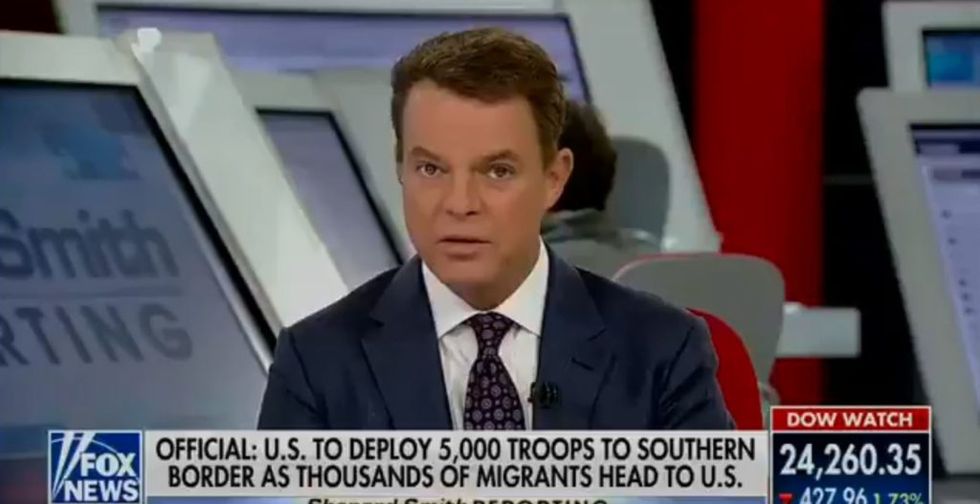 Fox News Network may be known for stoking the fears of its majority-conservative viewers and bolstering the falsehoods put forth by President Donald Trump, but at least one host is setting the record straight.

Shepard Smith assured viewers on his show, Shepard Smith Reporting, that despite the president's fear mongering, the migrant caravan currently traveling on foot from Central America to the United States is not an "invasion," nor are they a threat to the nation.

"The migrants, according to Fox News reporting, are more than two months away - if any of them actually come here. But Tomorrow is one week before the midterm election, which is what all of this is about. There is no invasion. No one is coming to get you. There's nothing at all to worry about."

Watch the video below:

By all accounts, Smith is right.

The caravan is still around 1,000 miles from the nearest United States border. Even if it does reach the United States, it will do so long after the 2018 midterm elections. Its existence is no outlier either. The last caravan began in April of this year and peaked at about 1,500 people, but by the time it reached the United States, the group had waned to less than 500 people.

Some wondered what the segment must've seemed like to a devout Fox News viewer suddenly confronted with facts.

I genuinely wonder what Shep Smith's show is like to someone who watches Fox all day. Is it like some weird unsettl… https://t.co/Up5Sig3zJN
— James Poniewozik (@James Poniewozik) 1540847512.0

"Hi, everyone, it's me, Shep Smith here to tell you that everything my colleagues said up until this hour is fear m… https://t.co/NlqmrJcnJC
— Maggie Serota (@Maggie Serota) 1540846863.0

Despite there being little reason for alarm, the president appears to be swatting a fly with a sledgehammer anyway.

Donald Trump plans to send over 5,000 United States troops to the border by the end of the week to counteract the caravan.

Many believe that the response - like his intention to end birth right citizenship - is one of his recent efforts to drum up support from his base for Republican senators just ahead of midterms - which Smith pointed out.

Others are noting this as well.

The fears of the caravan stoked by the president and his ilk, as well as the blame of it on Democrats, is believed to have played a factor in the recent Tree of Life Synagogue shooting that killed eleven people. The shooter posted on Gab:

HIAS likes to bring invaders that kill our people.

I can’t sit by and watch my people get slaughtered.

Screw your optics, I’m going in.

The post appeared related to a conspiracy theory that Jewish Democrats are assisting the transport migrants in the caravan.

While some may believe the Democrats are directly or indirectly responsible for the mass migration, it's clear which party has resorted to goading the public into hysteria to win an election.